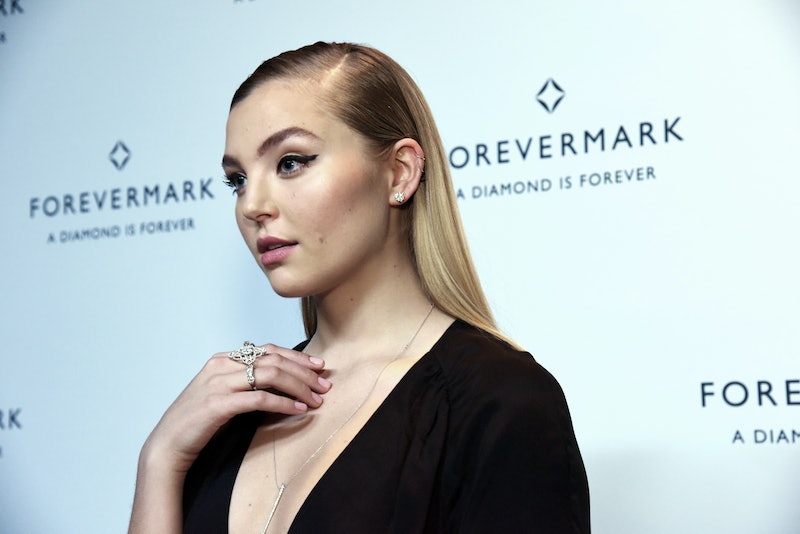 The countdown is on to the 2016 Victoria's Secret Fashion Show, and the models are just as excited as we are. As always, the details of the show are prettttyyy under wraps, but there are a few things we know so far. I caught up with model Rachel Hilbert at the Forevermark Black Label Collection Launch in NYC (where she was decked out in some of the most insane diamonds I've ever seen) to talk about what she's most looking forward to in the show.

Hilbert has been the face and official spokesperson of Victoria's Secret PINK since 2015 (you probably recognize her from the life-size posters next to the pajama display in every VS store around the country), and this will be her second time walking in the show. Even though she's no longer a rookie, she was still absolutely thrilled to find out she'd be walking again and had the same reaction any of us would have upon hearing the news. "I was in the car after a fitting, leaving the main [Victoria's Secret] headquarters, and my agent called me and he told me I was confirmed, and I started crying and called my mom right away," she says.

Here are three things that Hilbert is most excited for at this year's show, which airs on Monday, Dec. 5th at 10 p.m. E.T. on CBS.

In the past, the VS fashion show has been held in New York, Miami, Las Vegas and London, and this year it's headed somewhere totally new. "This year it's in Paris, which is the first time Victoria's Secret has ever done that!" says Hilbert. The show itself will take place on Wednesday, Nov. 30 at the Grand Palais (pictured above), though it won't air until the following Monday. No word on whether the angels will be taking a private hot pink jet again.

We've already seen a sneak peak of the fantasy bra (which will be worn by Jasmine Tookes), but Hilbert hinted that there are a lot more stunning surprises in the works. "There's a lot of gooooorgeous clothes," she says. "The clothes are so spectacular and beautiful, it's insane the stuff that they have lined up.I'm excited to see it myself." Me too, Rachel. Me too.

Even though it feels like it would be hard to beat the T. Swift, Selena Gomez, and Rihanna lineups of years past, this year's performers are going to give us one for the history books. Bruno Mars, Lady Gaga, and The Weeknd (who performed last year) will take the stage. All three singers have new music out, and Hilbert can't wait to see them all perform. But her top pick? "I personally have never seen Lady Gaga live and I'm excited to see her voice live and really hear her sing live, so I'm excited to really see her," she says.

Don't forget to tune in Monday, Dec. 5 at 10 p.m. E.T. on CBS to see Hilbert and the rest of your favorite VS models walk the runway!