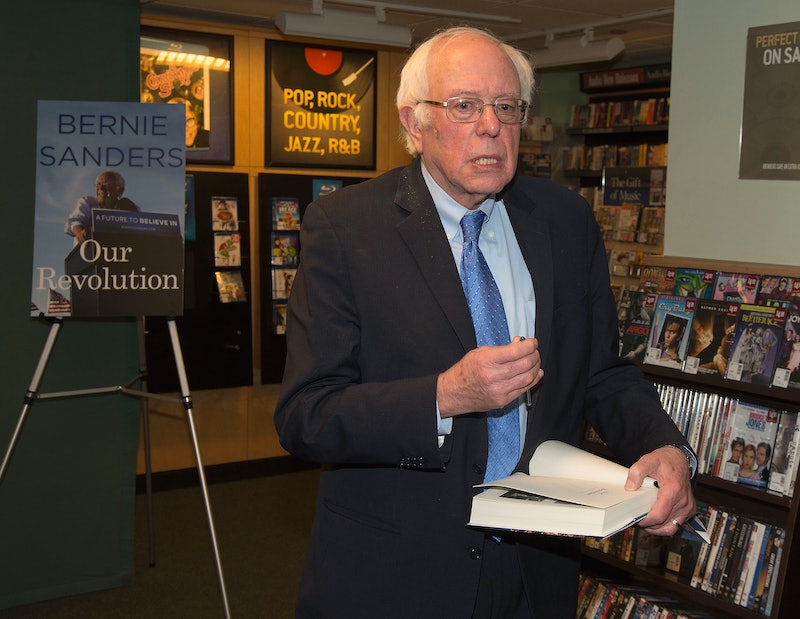 Following remarks Sen. Bernie Sanders made at a book signing event in Boston on Sunday, headlines began pouring out about how he supposedly thinks the Democratic Party should "ditch" identity politics, or that the party should "move away" from it. These headlines, and the criticisms that they inspire, promote an either/or approach to acknowledging working class struggles versus identity politics (here conceived as acknowledgment of the struggles of people of color, LGBT individuals, immigrants, and women). Frankly, it is an either/or approach that I don't think Sanders' remarks advanced at all. In fact, I believe his comments are crucial at this moment — if we hear what he actually said.

Since Donald Trump became president-elect, a very important conversation on the left has ignited over to what extent, if any, the Democratic Party needs to start taking the struggles of the working class more seriously. Some believe Trump's victory is a resounding "yes" to that question — a sign there needs to be a greater focus on white working class voters in particular. In its assessment of the election, The Wall Street Journal's Reid J. Epstein and Janet Hook noted, "it’s the Democrats who are plunged into a bout of soul-searching about the party’s diminishing footprint, especially among the white working class."

Others disagree with the notion, such as Bust's Priya Jain, who wrote "The 'White Working Class' Can Kiss My Brow Ass." Jain argued that Trump's win was the result of racism, xenophobia, and sexism, making identity politics all the more important to center on:

[W]hen you tell us to stop being terrified about the very sanctity of our bodies and listen to the plaintive whines of the white working class, you are telling the disenfranchised to pay more attention to the over-franchised ... [T]he brown and black working class, the poor folk who’ll really be ground to dust by the Republican economic agenda, the women in red states who won’t be able to get the health care they need once Mike Pence gets his hands on their vaginas. They are the ones who need us now.

There is tension between those on the left who think we need to listen better to the working class and those who think we need to amplify the voices of others. The implication among some in the latter camp, and those who wrote the Sanders headlines above, seems to be that we can either focus on class or identity politics, but not both at the same time without diminishing one of them.

This is not how I interpret Sanders' remarks. In saying that the party needs to "go beyond" identity politics, I hear him to be saying that while maintaining a focus on diversity and social justice for various marginalized groups, the left also needs to fully understand and act on the knowledge that the working class, which includes people of all races, is oppressed. After all, Sanders said:

It goes without saying that as we fight to end all forms of discrimination, as we fight to bring more and more women into the political process, Latinos, African Americans, Native Americans — all that is enormously important...

However, Sanders said that greater diversity in politics is not a high enough goal if it doesn't come with meaningful changes that improve the lives of the working class. He gives a few examples, including that having a woman in power isn't "good enough" if that woman doesn't take on the institutions and industries that harm working-class Americans. He ties it all together at the end of his remarks, saying:

I believe Sanders wants a Democratic Party with a strong focus both on identity politics and on the working class, and he presents them not as mutually exclusive, but as two things that should go hand in hand. This should appeal to those who adopt an intersectional lens and seek to identify and resist various forms of oppression. But I worry that the conversation on the left seems to be becoming increasingly divided between class versus race, gender, ethnicity, sexual orientation, gender identity, and country of origin, and I sense taboos being strengthened — the type that lead to headlines that jump down Sanders' throat for speaking up for the working class, yes, but much worse as well.

I believe such taboos present a far greater danger both to the American left and to the well-being of all people than the risk of losing focus of the needs of certain marginalized groups by acknowledging the needs of another one. Trump won a substantial portion of the white working class vote, including in counties that previously went for Barack Obama. Trump did speak to struggling whites' legitimate economic concerns in a way that the Democratic Party, I believe, has clearly failed to do so.

The left is now tasked with speaking to working-class needs while maintaining a focus on the needs of others who experience oppression in various ways. It's less likely to achieve this balance if any mention of the white working class is taken as a dismissal of the struggles of others.