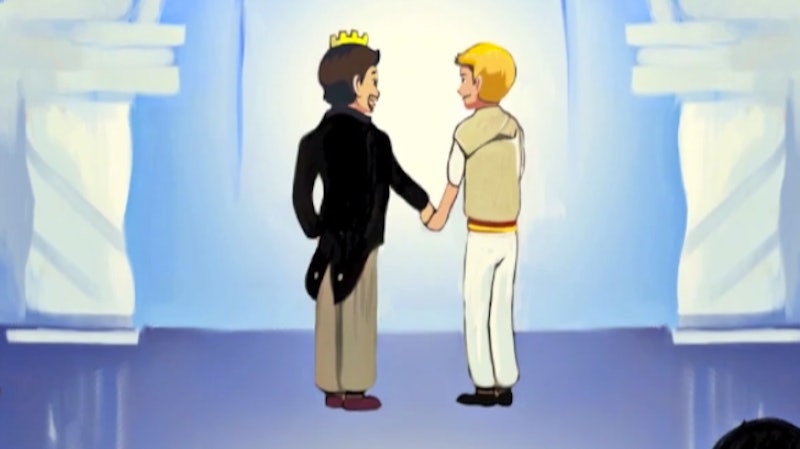 Ever notice the serious lack of LGBT Disney princesses, fairy tale characters, and comic book heroes? It’s no wonder why young people struggling with their sexual orientation may feel alienated as kids and adolescents. Luckily, as reported by PolicyMic, children's book author Daniel Errico noticed this void and wrote “The Bravest Knight Who Ever Lived” — a fairytale with a gay protagonist.

In the book, after Cedric defeats the aforementioned dragon, he frees a lovely princess as well as a prince. On their trip back to the prince and princess's castle, he gets to know the prince. As it turns out, they have a lot in common! Back at the castle, the king and queen shower Cedric with thank you gifts, and the princess even asks for his hand in marriage — which, when you think about it, is also unconventional, and quite logical. The prince politely declines with the note that he’s happy they’re friends (again, more logic). He then confesses that he’s fallen for the prince, and with the king’s blessing the two get married.

I know, where was book this when we were kids?

Errico told the Huffington Post in an email that he wanted to get the point across in the most positive way possible:

The story is meant to be a new take on the old-fashioned fairytale. I believe that all forms of love and marriage should be framed in a positive way for children because they are positive things. Hopefully, the choice of marrying a prince over a princess will be less noteworthy for a hero like Cedric in the future. I've been so happy to see the story embraced in the way that it has, and I hope by making it accessible online for free that more people continue to do so.

But, of course, with anything that begins with an “L” and ends with a “GBT”, there’s going to be some controversy in its wake. Hopefully, coverage of Errico’s story will inspire teachers, school districts, and parents to share books and stories like this one with young people. Maybe it will even inspire others to center more children's literature and film around LGBT characters (hi, Disney!).