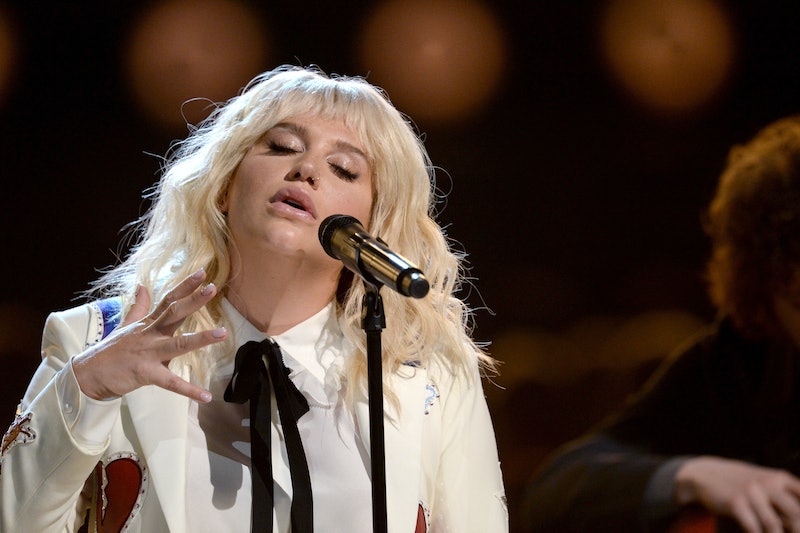 Since her rise to fame, Kesha has proven herself to be a commendable musician. She's garnered many No. 1 singles, as well as much acclaim and popularity in the music industry. But Kesha will receive Billboard's Women In Music Trailblazer Award on Dec. 9 for a way more important reason ruling the charts, according to Billboard. Janice Min, president and chief creative officer of The Hollywood Reporter-Billboard Media Group, said in a statement that the honor was based on the fact that Kesha is a "fighter," and rightfully so. "By combining artistic fearlessness with unbounded creative energy, Kesha has continually pushed the limits of what was once thought possible in pop music," Min said in the statement, according to Billboard. "She’s a force on stage, an inspiration in person and a true Trailblazer for millions of music fans around the world.”

Kesha had been involved in highly-publicized lawsuit against her longtime producer Dr. Luke for alleged sexual assault and emotional abuse, but the case was dismissed during the summer. That can't be an easy thing to go through, but the singer stayed strong, postiive, and honest for her fans during the whole experience. Kesha just finished a tour with The Creepies and continues to keep on working without looking back — a real trailblazer.

Kesha isn't the only awesome lady being honored at the eleventh Women in Music Awards — this event will celebrate many amazing women. Madonna will receive the 2016 Woman of the Year honor. Halsey is set to be named as Rising Star, while Meghan Trainor will receive the Chart Topper Award, Andra Day will be called Industry Powerhouse, Maren Morris is nabbing the Breakthrough Artist award, and Shaina Twain is set to receive the Icon award. So impressive. Especially with news that Audra Day, Meghan Trainor, and Halsey will also perform at the event — there's going to be some seriously awesome girl power vibes going on in New York on Dec. 9.

It's so great that these talented and groundbreaking women are being honored at Billboard's event — surely, the hard work of these performers continues to give hope to the young women out there looking for inspiration.