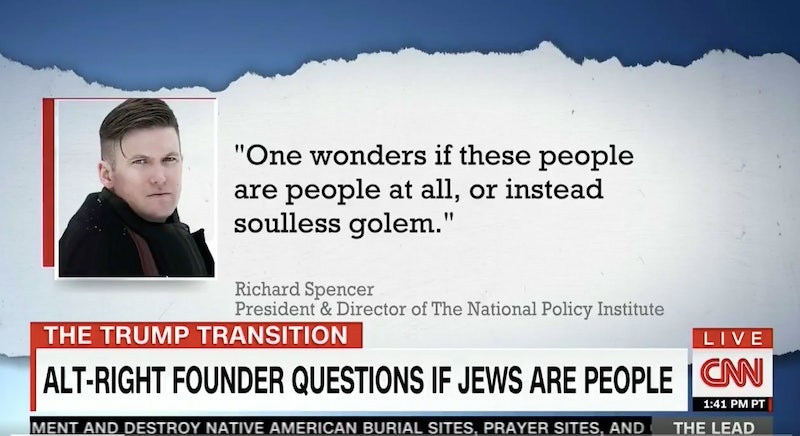 CNN set off a firestorm Monday when it aired a panel discussion with a chyron that said "Alt-Right Founder Questions If Jews Are People." A few screenshots of the segment quickly circulated on Twitter, and many sensible people were outraged, in large part because CNN had chosen to identify the man in question, Richard Spencer, as an "alt-right founder" rather than a neo-Nazi. But while Spencer is certainly a neo-Nazi, the truth behind CNN's "Are Jews people?" chyron is a bit more complicated.

The backstory here is that Spencer, who heads a respectably-named white supremacy think tank called the National Policy Institute, hosted a panel discussion for his fellow supremacists in Washington D.C. on Saturday. There's no ambiguity about what this event was: Attendees posed for photographs giving Hitler salutes and shouted Nazi-era propaganda slogans in the original German. It was a neo-Nazi rally, albeit a professionally-organized one where the neo-Nazis wore suits.

However: While Spencer is indisputably an anti-Semite, he did not, technically, question whether or not Jews are people. What he did — and bear with me, because this is a bit nuts — is ask whether the media figures that denounced Trump are people, or if, rather, they are soulless clay monsters created by the Jews.

I'll explain this insanity. While talking about the media, Spencer said:

One wonders if these people are people at all, or instead soulless golem.

By "golem," Spencer wasn't referring to Lord of the Rings. Rather, he was referencing a Jewish folktale about a Rabbi who creates a magical, soulless creature — a golem — tasked with protecting the Jews from anti-Semitism. And the context of this quote makes it clear that Spencer's "golem" accusation was aimed at the media, not Jews.

Not that this makes it any better. The suggestion that Jewish overlords are creating monsters to infiltrate the media and do their bidding is every bit as anti-Semitic as the suggestion that Jews aren't people; it's just a more crazy, unhinged form of anti-Semitism. Nevertheless, CNN's chyron wasn't quite accurate, at least insofar as the quote to which it was referring goes.

Just as important is the fact that CNN wasn't actually interviewing the neo-Nazi in question, or hosting him on one of its shows. A lot of people on Twitter concluded otherwise based on the screenshots that circulated, and that's understandable: Taken out of context, that chyron seems to suggest that the guy who said the quote was actually one of the guests on the show. But he wasn't; the guests were just discussing him on the show.

These nuances are subtle, but they do matter. Many people have noted and condemned the normalization of racism, misogyny, and authoritarianism that's taken place since Trump got elected, and that condemnation is absolutely crucial. Trump is not a normal leader; he is an abnormal one in the most frightening ways, a bona fide fascist, and deserves to be labeled as such.

But if we're going to criticize the media for this, we have to make sure that criticism is solid and based in fact, not misrepresentations; otherwise, the factual criticisms of the same phenomenon becomes easier to dismiss. In this case, CNN mischaracterized a quote from a neo-Nazi Trump supporter, and failed to identify the speaker as a neo-Nazi. That's bad. But the network didn't actually host him on the show, and that would have been much worse.

In response to the outrage, CNN's Jake Tapper acknowledged on Twitter that the chyron was unacceptable, adding that it made him "furious." Hopefully, CNN won't make the same mistake twice.