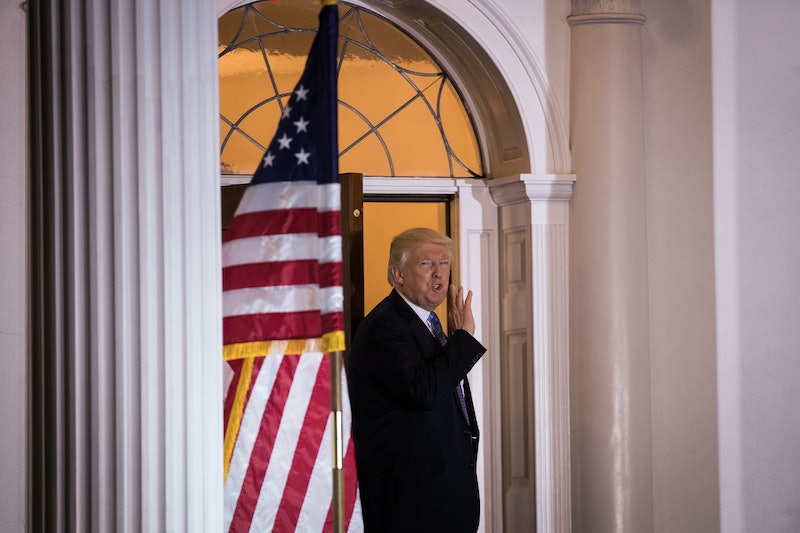 If you thought the naming of alt-right darling Steve Bannon as Donald Trump's chief strategist was bad enough, think again. Footage has emerged of white nationalists yelling "Heil Trump!" at a National Policy Institute conference. And while Trump's campaign responded to the disturbing video, he didn't do nearly enough. In fact, he reserves his more personal commentary for Saturday Night Live and Hamilton. But considering that the number of hate crimes has increased so much that the New York police have had to form a special hate crimes unit, the president-elect should be doing a lot more to combat division in America than vaguely telling his supporters to "Stop it," during a 60 Minutes interview.

The video in question included a speech by Richard Spencer, who runs the National Policy Institute, an alt-right think tank, and who has in the past called for the "peaceful ethnic cleansing" of the United States. To be fair, Trump's campaign did respond to the video in a statement: "President-elect Trump has continued to denounce racism of any kind and he was elected because he will be a leader for every American. To think otherwise is a complete misrepresentation of the movement that united Americans from all backgrounds."

But it's hard to say Trump is a "leader for every American." The National Policy Institute, known for its white nationalist policies, celebrated his election by proclaiming — in Nazi jargon — "Heil Trump! Heil our people!" Most disappointingly, Trump didn't use specific names while denouncing their message. He also didn't bother to post a tweet. (And yes, Spencer was talking about white people when he said "our people.")

Trump's denouncement of this video pales in comparison to his tweets condemning a comedy television show and a theater production for being "biased" against him and "rude" to his Vice President Mike Pence. Newsflash: the election is over, so you can't ask Saturday Night Live for "equal time." And Pence himself said he wasn't offended by the Hamilton cast's message, which, by the way, was about working on behalf of all Americans.

Trump is a frequent Twitter user, and is known for expressing opinions through social media. But while he was quick to attack the "biased" media, Trump didn't utter a peep when Spencer clearly expressed divisive sentiments. "America was until this past generation a white country, designed for ourselves and our posterity," Spencer said, to Nazi salutes. "It is our creation, it is our inheritance, and it belongs to us." I don't know how racism and xenophobia can be expressed more clearly.

According to Trump's former campaign manager Kellyanne Conway, Trump has already addressed hate crimes. "He has addressed it many times. ... He's told people to cut it out," Conway said, according to POLITICO. "He said that on 60 Minutes in front of 32 million people. And he has said that he'll be the president of all Americans." But if the "Whites Only" signs, swastikas, and chants of "White power!" in school hallways are any indicator, the white nationalist sentiments of Spencer's speech are already being expressed around the country. If Trump truly wants to "make America great again for everyone," then he should consider the negative impact white nationalism has on people of color in America. Maybe start by laying off Hamilton and laying more heavily into the Ku Klux Klan.