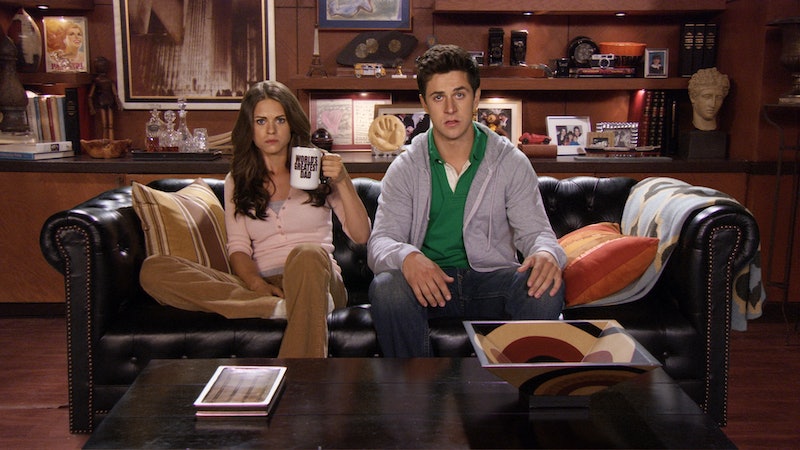 Those kids up there have been listening to Ted Mosby's story of How He Met Their Mother for the last nine years. So have we. And now, so many ex-girlfriends and slap bets and Robin Sparkles videos and Barney Stinson felonies (none charged) later, we've arrived at the end. Presumably? In a world where fan theories skew between "the mother is dead" and "Ted has Alzheimer's," it's not crazy to think this next hour could end with some True Detective-style rhapsodizing about the circuitousness of storytelling, and life. But probably Barney will die and Ted will ultimately wind up with Robin? THAT'S MY GUESS ANYWAY.

Just one hour left with this often great, often frustrating show that many people forgot still existed until they saw NPH dancing around March Madness promos. Will it go out with a bang or a whimper? Guys -- that's why we live-blog.

8:51pm THE RETURN OF ROBIN AND THE END OF THE LINE

“Daddy’s home,” says Barney in response to Robin’s question about his baby, which is both sweet and deeply creepy.

“Someone pretty persuasive talked me into it,” says Robin, about coming to Ted’s wedding. The Mother asked her to be there! Hahaha The Mother is just there so they can have someone to take pictures of The Gang.

5 MINUTES WHAT IN THE HELL’S GONNA HAPPEN?!?

Big question: will we learn The Mother’s name? (It's Tracy.)

Ted reflects on the past to his kids, the road he travelled to get to their Mother. All the difficulties and goodness that happened along the way. “I carried it with me when she got sick. All I could do is thank God, every God ever in the whole universe…”

FLASHBACK to the train station, where Ted actually did introduce himself to the Mother. Fond remembrances of the Econ class she took, Ted finally getting his yellow umbrella back.

More reminiscing: they were fated to be together. “Funny how sometimes you just…find things.”

“And that, kids, is how I met your mother.” The kids finally, finally talk back. “This whole story is about how you’re in love with Aunt Robin…how you totally have the hots for Aunt Robin.” Mom’s dead. Does he have permission to date her? “Mom’s been gone for six years now. It’s time.” EASY OUT, WRITERS.

Ted’s about to call her but instead…

Cut to Aunt Robin, with a very unique Future Haircut and a bunch of Future Dogs in her Future Apartment. She looks out. There’s Ted, with the blue french horn. Final shot: Ted looking up at Robin, peering out her window, a new but very old connection rekindled.

And a surprisingly simple ending! Who else thought this was going to be much more convoluted than it wound up?

8:43pm: In which a baby changes Barney's perspective on everything

Jim Nance magically shows up, for some reason. Barney’s bummed because now his prime dating years are over.

2020: Ted’s showing his daughter the Goliath National Bank building. And then Robin shows up. OH BOY OH BOY. She’s a globe-trotting newswoman. Then Ted connects with Lily and Marshall in what is clearly a medical waiting room, which isn’t great for anybody.

Nope, Mother’s not dead yet — Barney’s going to be a dad! Annnnd the father of a girl. Ellie. He holds this baby in his arms, uncomfortably…and something inside of him changes. He starts crying. “You are the love of my life. Everything I have, and everything I am…is yours. Forever.” Repeating the line he used sarcastically at the bar, earlier. Now very, very sincerely. NPH kills it, obviously, but the notion that Barney to this point had not changed...don't buy it. Selling out the direction the character had headed.

Ted re-proposes to The Mother (whose name we still don’t know). “Will you marry me on Thursday? Your office said it was okay.” (WHAT OFFICE?!?) And then…and then…Robin shows up to the bar. ACT OUT.

It’s 2018 now, two years after the last scene. And we’ve got a great ‘Friends with Benefits’ or whatever it’s called promo at the bottom. The future looks bright! Ted’s got kids now. Barney’s pumped — SO pumped — that the gang is back together.

“Anytime someone says something sad…we hang out for another hour.” Luckily Marshall has become a judge again, so things aren’t so sad! Except for the fact that Robin’s not there, and won't be for the duration of this segment.

Will Ted go home to his children?!? 1:45AM TOO DRUNK CAN’T DO IT. Barney tells his friends that no, he’s not capable of change. (Which, you know, lady doth protest.) “Can I please just be me?” Marshall, aka “Judge Fudge,” allows it. We’ll see how this shakes out!

2019: Robots versus Wrestlers. Turns out Ted and The Mother never got married. SHE IS ONLY JUST THE MOTHER AND NOT THE WIFE. Barney shows up to tell a sad story about his “perfect month” — 30 girls in 30 days. Annnnnnnnd he got a girl pregnant. WUUUUUUHHHHHHHH.

**My friend Kishori thinks we're due for a MASSIVE flashback montage of Robin winning back Ted ala Barney's proposal to Robin? and I don't disagree**

8:23pm: I THINK WE ALL KNOW WHERE THIS IS HEADED

“A very successful marriage that happened to only last three years.” Says Lily: “this ruins everything.” Also learned: Lily’s about to have Baby #3, Ted and The Mother have totally moved to the suburbs. Life keeps moving on.

“Promise me, no matter what — we will always be there for the big moments.”

October 2016: Halloween! Robin shows up sans costume, where Marshall is Captain Ahab and Lily is the White Whale (PREGGERS). And Barney’s there as…David Lee Roth, scoring digits left and right. Ted’s wearing the Hanging Chad costume. Robin has a moment where she’s thinking about the past with Ted, only to have that interrupted by The Mother — that STUPID MOTHER — showing up and ruining her vision.

So now, the big question: is the remaining half hour Robin trying to win back Ted the same way he did for, you know, eight years?

Flashforward (or whatever) to 24 hours post-wedding, where Ted sits at their regular MacClaren’s booth. He’s not moving to Chicago because…he met a girl. “Who is this person?” Is he gonna blow it with this girl, again?!? “He’s fallen in love so many times before.” Lily: “Nope…this is different.”

Flashforward again to wedding planning for Ted and The Mother’s wedding. There will be castles, and hot air balloons. Ted asks Barney about how he and Robin are doing. There is…tension. Barney’s clearly upset that Robin is never around, being an internationally known newscaster.

NEWS FLASH: The Mother can’t get married in September because the woman is pregnant.

May 2016: Ted and The Mother’s house, where everyone meets up. Marshall’s back in corporate law, which he doesn’t love (they’ve just come back from Rome). Barney and Robin are clearly having problems. They keep describing their trip as “great. Great. Great.” THEY ARE REALLY TELEGRAPHING THIS THING, HUH?!

“If I gave you an out…an exit ramp, at the three year mark. Would you take it?” After much drinking and much sex they decide…to get divorced.

And BOOM goes the dynamite. Ted, you're all clear, buddy!

FLASHBACK to some unspecified time, late 2005, just after everyone met Robin. 2005 haircuts and all! Lily admonishes Ted and Barney (and Marshall, I guess, but not really) not to "bang her new best friend. The only way you can hook up with her...is if you marry her." And all this viewer can think is IT'S ROBIN, IT'S BEEN ROBIN ALL ALONG THE MOTHER IS GOING TO DIE AND ROBIN WILL BE TED'S WIFE.

Wedding time. Post-wedding. And from across the room, Ted spies the Mother playing bass. Barney wants to set up Ted with the bass player. She’s perfect for him! But, you know, Ted is leaving for Chicago. Like, immediately.

Tearful goodbyes. With Robin, a callback to all their army rank jokes. A good bro hug with Marshall. Hugging with Marshall. “ET goodbye.” with Lily. And then Barney. “We licked the Liberty Bell.” UH OH — “you don’t remember that?” OH GOD FIRST INDICATION THERE'S SOME MEMORY ISSUES.

“A High Five to Echo through eternity.” Or as Ted and Barney call it, a “High Infinity.” Big time high-five, which hurts both of their hands.

Ted makes his way to the Farhampton train station — I’d totally forgotten that this is where shit went down — waiting in the rain with that old lady. “I can’t really talk destiny right now.” SHE SHOWS UP. HERE WE GO.