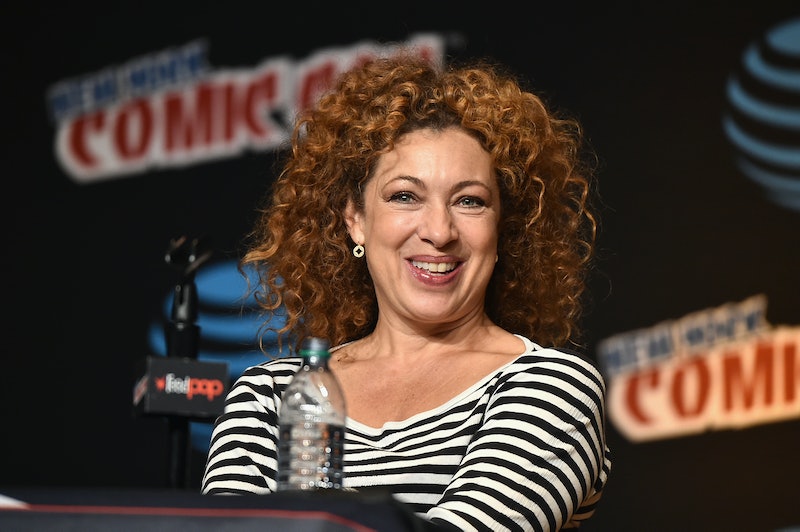 Netflix's Gilmore Girls: A Year in the Life dropped on Friday, so let the marathon-watching commence. The four-part revival series includes old faces and new, including an eccentric British woman named Naomi Shropshire, played by Alex Kingston. Stop reading now if you don't want spoilers for Gilmore Girls: A Year in the Life. So who is Naomi in the Gilmore Girls revival and what is her story? A lot of mystery surrounded Kingston's role when news broke that the British actor was cast, but she did reveal that she plays "a very eccentric character" earlier this year at a fan convention, according to TVLine.

And eccentric is a bit of an understatement. In the revival, Rory Gilmore (played by Alexis Bledel) has already had a big-time byline in The New Yorker with an article about Naomi. The written piece is so well-received that the Londoner wants to write a book with the younger Gilmore. In the episode "Winter," Naomi describes herself as a "hellion" whose main expertise lies in the fields of feminism and environmentalism. She also seems to specialize in swiping other peoples' dishes from waiters, having a revolving door of boyfriends, day drinking, and underestimating the Brexit vote.

Naomi acknowledges her imperfections to Rory, saying she wants the book to truly reflect her and her flaws. "I want to be seen as I am, warts and all," Naomi says. Later, Rory tells Logan that she knows working with Naomi will be an interesting adventure, to say the least. "She drinks as fast as she talks and she never seems to get tipsy at all," Rory says in the episode "Winter." "If anything, she seemed to get smarter and more coherent." Logan, though, describes her as "difficult and a little weird."

Eventually, Naomi's eccentric nature prevents Rory's book proposal from making much progress due to her indecisiveness. "Let's make it a children's book," Naomi hilariously suggests at one point, frustrating Rory.

The actor behind Naomi will definitely look familiar to viewers. Kingston has played River Song on Doctor Who and starred on ER as Dr. Elizabeth Corday Greene. She also is currently recurring as Dinah Lance on Arrow. Kingston has also appeared on Blue Bloods, Private Practice, and NCIS, as well as the feature films Like Crazy, Alpha Dog, and Croupier.

But her role as Naomi in Gilmore Girls: A Year in the Life is bound to be one that fans will definitely remember.

More like this
'The Sandman’s Ending Is A Departure From Neil Gaiman’s Comic Book Series
By Kadin Burnett
'Stranger Things' Season 5 Will Echo Season 1 In A Key Way, The Duffer Brothers Confirm
By Kadin Burnett and Sophie McEvoy
What's New On Netflix: A Third '365 Days' Movie & Lili Reinhart’s New Film
By Arya Roshanian
‘Squid Game’ Creator Hwang Dong-Hyuk Just Dropped A Major Season 2 Tease
By Brian Anthony Hernandez and Bustle Editors
Get Even More From Bustle — Sign Up For The Newsletter