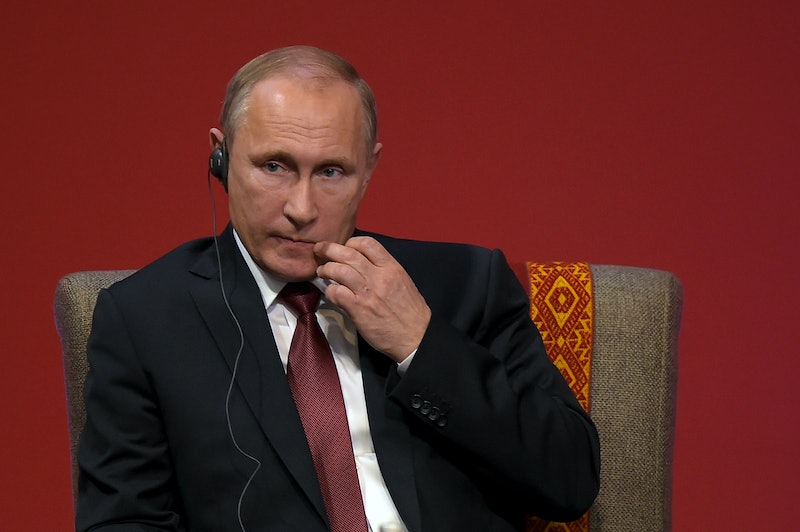 What we can expect from a Donald Trump presidency remains a mystery. But one thing seems clear: The United States' relationship with Russia and NATO may change. And that's a scary proposition, especially given new comments on NATO from Russian President Vladimir Putin.

In a documentary that aired for the first time on Nov. 21 on Russian state television, Putin said that his country may target "NATO sites" if it feels threatened. And what does President-elect Trump say at the same moment? Let's reset relations with Russia. First, read what exactly Putin said in the video, which was filmed when he may have thought Hillary Clinton would be the president-elect (despite Russians hacking the DNC emails). The film, Ukraine On Fire , was made by American filmmaker Oliver Stone. Here's what Putin told Stone:

We are forced to take countermeasures — that is, to aim our missile systems at those facilities which we think pose a threat to us. The situation is heating up ... Why are we reacting to NATO expansion so emotionally? We are concerned by NATO’s ­decision-making.

Putin went on to blame American pressure for new bases that may open in smaller countries in the security pact. It's because of these new facilities closer to Russia that the country would consider attacking NATO in self-defense, Putin and his diplomats have said, according to The Washington Post.

This is the kind of Russian posturing (or arguably threats) that Trump is willing to overlook completely. The day before this video aired, Putin announced that he and Trump had spoken and agreed to mend ties between the countries. "The president-elect confirmed he is willing to normalize Russian-American relations. I told him the same. We did not discuss where and when we would meet," Putin told reporters, according to CNBC. Moscow said the new relationship would be based on "equality, mutual respect and non-interference in the other’s internal affairs."

This could be bad for other countries and civilians around the world, particularly Syria. The last time that Trump and Putin spoke, the next day, the Russian air force began a military bombing campaign of the rebel groups that oppose the Assad regime (some of whom the United States have supported). An Aleppo hospital was even hit. More friendliness from Trump could therefore result in more civilian deaths.

This kind of rhetoric also scares the Baltic nations, who are NATO allies. A story by the BBC pointed to Trump ally Newt Gingrich's comments on Estonia — how the country was basically a suburb of St. Petersburg. "Forty percent of Estonia is Russian… I'm not sure I would risk nuclear war over some place that is the suburb of St. Petersburg," Gingrich said in July.

NATO's main hierarchy has commented on the matter, saying that they are certain that Trump will continue with the military alliance, even if member countries need to pay more. Jens Stoltenberg, the NATO secretary general, called the need for European nations to pay more his top goal. But he also was positive: "I am absolutely confident that President Trump will maintain American leadership in the alliance and will maintain a strong commitment to European security. It is important for Europe, but it is also important for the United States."

For his sake, and arguably all of ours too, let's hope he's right. Because if not, these current dangerous developments will be nothing in comparison.