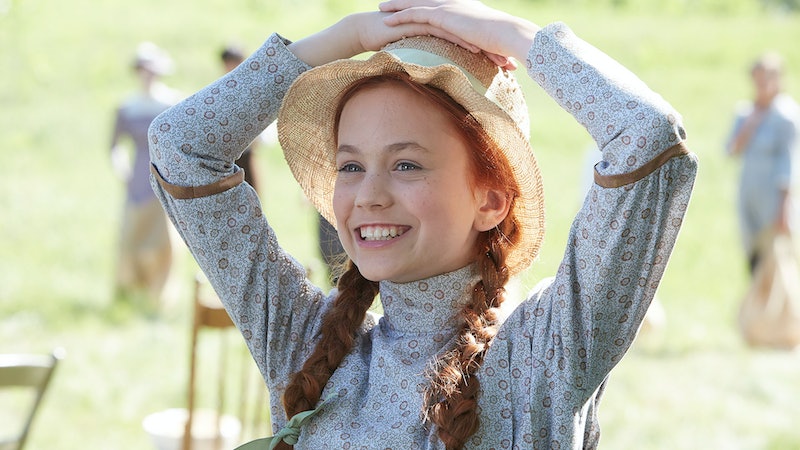 On Thanksgiving day, viewers have to wait until past midnight to begin streaming Gilmore Girls on Netflix. But, luckily, there's another exciting premiere at 8 p.m. that evening — Anne of Green Gables on PBS. Countless bookworms have fond memories of reading and re-reading the series as a kid. Who didn't love this plucky, mischievous redhead who just couldn't manage to stay out of trouble? In one of my personal favorite Anne moments, she accidentally gets her best friend Diana drunk by serving her currant wine that she mistakenly believes is raspberry cordial. (Hey, we all make honest mistakes.) As a devotee of the book series, my only apprehension about the adaptation is whether or not Anne of Green Gables on PBS will be different from the books.

Anne of Green Gables was published in 1908 and it begins when Anne is 11 years old — which is exactly when the PBS movie will open. The six-book series concluded with Anne of Ingleside, which published in 1939, and the beloved childhood heroine was now 40 years old — so we had the pleasure of watching her grow up. In an interview with Parade, Martin Sheen (who plays Matthew Cuthbert, the kind-hearted man who takes in our beloved orphan) stated the nostalgia factor is important, which seems like an indication that the movie will strive to stay accurate to the book's tone and spirit:

Anne’s a clear reflection of how we used to entertain ourselves and educate ourselves before cell phones, before television, before the internet. I think it’s very important, particularly for young people today, to have a chance to visit the past in order to suggest a better possibility for the future. This is one of those great, classic stories out of Canada. She’s revered there and it’s important, as I say again, for children to realize that our dreams can be nourished by our imagination, by our willingness to challenge ourselves to move out of the doldrums, and to really accept our responsibility as human beings for each other.

However, Variety observes that the 90-minute time constraint made it difficult to fully capture the essence of the book and its amazing, complex characters. So, be warned that the film ends about halfway through the plot of the first book and filmmakers chose to focus on Anne's arrival in Avonlea and the Cuthbert's decision on whether or not to "keep" her despite the fact that they had requested a boy orphan who could lend a helping hand on their farm.

The outlet notes that, in the portion of the book that is depicted, showrunners made an effort to include as many key scenes as possible, but they aren't as fully fleshed-out as some people may hope. In short, fans shouldn't expect the full story arc to be depicted and that may be a disappointment to some viewers. But, that's a common struggle when a rich, beautifully written novel is moved to the screen — it's hard to capture every single moment, especially when it's a 90-minute TV movie.

But, that doesn't downplay strong filmmaking and the fact that watching a beloved childhood tale is comforting for many viewers — especially on a relaxing holiday. According to the The Wall Street Journal's review, there are of course no surprises or twists and that's what makes it so enjoyable: "All is predictable, sorrows pass, happiness triumphs—a formula that works out splendidly in this endearing tale."

So, although some of fans' favorite scenes may feel rushed, we can rest assured that it will be as charming and beautiful as the book its based on. And, if any viewers are disappointed that the entire novel isn't covered, luckily they have the entire holiday weekend to re-read this beloved classic.