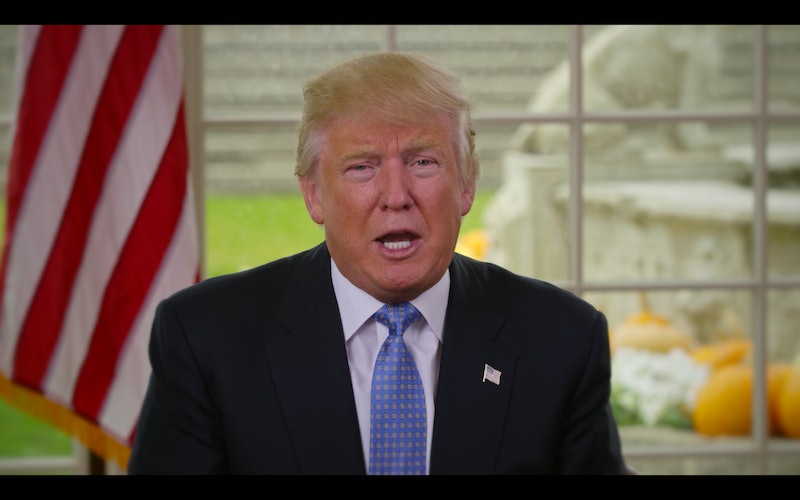 In retrospect, it was probably a little naïve to think that Donald Trump would change his frightening and stingy attitude toward the media after his election. Many held on to a sliver of hope that once he actually became the president-elect, he would get it together and have a more transparent media policy for the sake of the American people. Those hopes were largely dashed when more and more time passed without him holding a press conference, and have now been completely shattered since his release of a new self-congratulatory and completely isolated YouTube video uploaded Monday. In light of this emerging state-controlled media regime, here are five press freedom organizations you can donate to in order to protect the First Amendment and hold Trump accountable.

On the surface, Trump's use of YouTube to disseminate information doesn't seem that scary, and it wouldn't be if it was accompanied by proper scrutiny. After all, President Obama used YouTube for everything from town hall meetings and policy initiative updates to sad stories about Syrian children. However, all of this was accompanied by, and in fact uploaded right next to, press conferences where President Obama was available to be openly questioned by the press.

For the everyday citizen, YouTube is a great way to get your voice and ideas out into the world. However, the president is not an average citizen, and he needs more scrutiny on his actions than a teenager who uploads a skateboarding video. Trump's use of YouTube is scary because he's trying to get away with replacing real transparency and media with just his version of the truth, and that cannot happen, especially in this administration.

Donate to these five press freedom organizations to make sure real, qualified reporters have the access they need to hold Trump accountable for the next four years:

Trump's refusal to comply with the press seems to be a violation of the First Amendment, and the ACLU is one of the chief supporters of the Bill of Rights. They've already promised to be particularly litigious with Trump, so this is a cause they'd probably be happy to take on.

The Committee To Protect Journalists

The CPJ works in countries all over the world, but they've been particularly active in the United States since Trump's election. They'll need your help to cover his administration and fight for journalistic protection under this administration, so donate to the cause here.

The Society Of Professional Journalists

Trump has threatened to change libel laws, which could mean a lot more journalists end up in court proceedings. The SPJ runs two important funds to combat both the restriction of journalistic freedom and the legal fees journalists face when they are called in to court. You can donate to either or both here.

Freedom Of The Press Foundation

While this organization mostly helps other press freedom organizations boost their content, they also need help doing that job. Think of them like the defensive line of a football team — they support the guys on the front lines, but they need a little bit of support, too.

Reporters Without Borders maps how well the country's freedom of the press compares to the rest of the world, and that'll be especially important during the next four years.

If the country loses its active and open press, there's no telling what could happen in the next four years and beyond. These organizations need your help to make sure that doesn't happen, so donate monthly if you can, or whenever you can afford it.