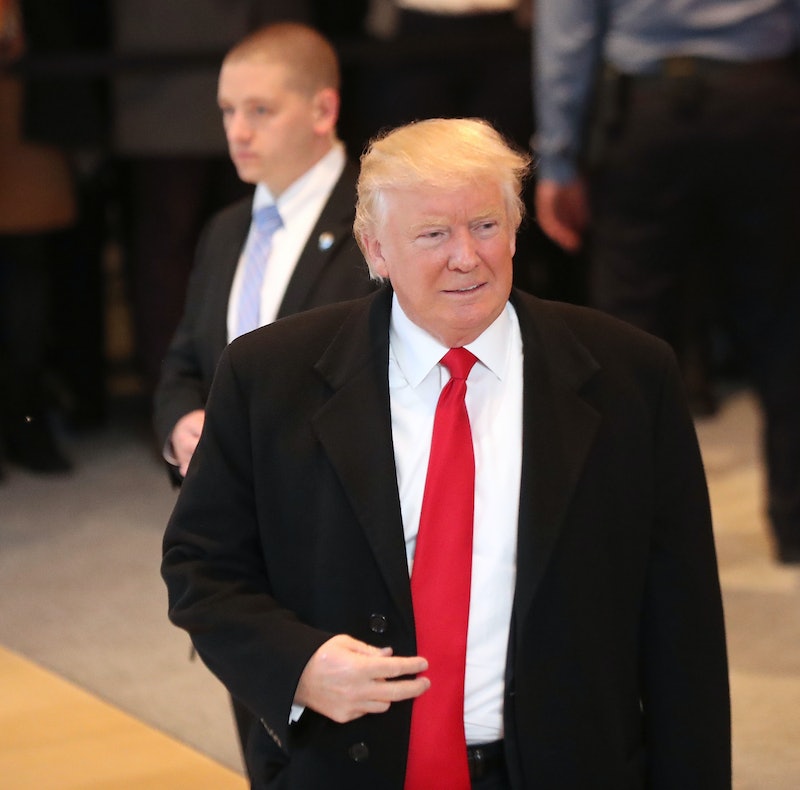 On Tuesday, Donald Trump sat down with The New York Times for an interview as president-elect. The interview got off to a rocky start before it even began, with Trump canceling the New York Times meeting over Twitter earlier in the morning, claiming that the paper changed the "ground rules" at the last minute. According to New York Times spokeswoman Eileen Murphy, it was actually Trump's campaign that tried to change the rules to avoid an on-the-record segment. Murphy said, "We did not change the ground rules at all and made no attempt to. They tried to yesterday — asking for only a private meeting and no on-the-record segment, which we refused to agree to." Ultimately, though, Trump re-agreed to it, and from that bizarre beginning stemmed some characteristically crazy quotes from Trump's New York Times interview.

Some of the quotes below rattle the brain because they run counter to what Trump said repeatedly on the campaign trail; others run counter to what he said as recently as last week. And then there are those seemingly fabricated out of thin air and presented as firm facts. Sure, flip-flopping and bending the truth aren't exactly scarce in the world of politics, but Trump arguably brought both to a higher, more overt level than we're accustomed to seeing. We'll spare ourselves the four or so minutes at the beginning of the interview during which Trump, according to New York Times reporter Mike Grynbaum, lamented how unfairly the paper has treated him; we've heard enough about how poorly-treated the man who may be Twitter's most prolific troll is. These New York Times interview quotes highlight the incoherence that has run through Trump's campaign.

On The Electoral College

In 2012, Trump tweeted that the Electoral College is a "disaster" worthy of inciting a "revolution." In the weeks following his general election win, courtesy of the Electoral College, Trump tweeted that it's "genius," ensuring us that he would have won the popular vote had he tried to do so. In Tuesday's interview, he said he's "never" been a fan of the institution, despite his week-earlier claim that it's genius. And he did not do better in the popular vote than Hillary Clinton (but maybe he would have if he tried?).

I'm unclear as to what Trump is basing this claim on. According to Pew Research, Clinton received 88 percent of votes cast by African Americans, compared to Trump's 8 percent. Not sure of a clearer way to gauge support than that.

When Richard Spencer of the "pro-European" National Policy Institute leads a "Hail Trump!" salute during a speech chock full of white power language, and when the Ku Klux Klan plans a parade in honor of your victory, you're praaaaaahbably doing some energizing there.

Not that Trump would actually have the power to force Clinton's prosecution as president, but pushing prosecution was a dominant theme throughout his campaign. Leading cheers of "Locker her up," Trump portrayed Clinton as a criminal who must be dealt her due; now, he's tepid at best about the whole thing. His previously-expressed strong feelings on the matter were clearly strategy and nothing more, but the idea that his supporters will just as easily brush off the anger he helped stir up is not so clear.

Here Trump is putting forward that "Happy Together" vibe concerning his relationship with the GOP establishment (in case you forgot: that was the opening song during the Republican National Convention). But after the drawn-out tension between House Speaker Paul Ryan and Trump, and Republican National Committee Chair Reince Priebus and Trump, and dozens of other Republican lawmakers as well as a couple former presidents and Trump, we all know this is more of a "You Can't Always Get What You Want"-type thing (in case you forgot: that was the song that played after Trump's acceptance speech on Election night). But we can certainly question whether they got what they needed.

Remember those alt-righters mentioned above? From my perspective, it's kind of hard to believe that Steve Bannon wasn't a strategic choice to keep Trump's fringe base happy. Bannon's appointment has sparked protests among the public, vocal opposition from Democratic lawmakers, and lukewarm-at-best reassurances from fellow Republicans concerning his alleged ties with white nationalism (which Bannon has denied). But Trump insists of Bannon, "If I thought he was a racist or alt-right or any of the things, the terms we could use, I wouldn't even think about hiring him."

Trump had at times vowed to "open up" libel laws to more easily sue the media when he feels he is treated unfairly. Here he admits that, for the first time, and not without prompting, he realizes he could be vulnerable to such laws as well. For someone so habitually... creative?... with truth and fact, it's pretty amazing that this had not occurred to him before.

Trump's quotes may be head-shakers, but they're no longer a surprise. The New York Times interview offered many examples of the way in which Trump's campaign has relied on continuously morphing rhetoric and a flexible relationship to the truth to get where it is.

More like this
Kim Kardashian & Pete Davidson’s Relationship Timeline From Start To Finish
By Jordyn Tilchen and Bustle Editors
Why Eurovision 2023's Host City Won’t Be Revealed For A While Yet
By Sam Ramsden and Rachel Mantock
Christina Aguilera Took A Powerful Stand At Brighton Pride
By Sam Ramsden
Are John Legend & Kanye West Still Friends? The Singer’s Latest Update Is Candid
By Brad Witter
Get Even More From Bustle — Sign Up For The Newsletter