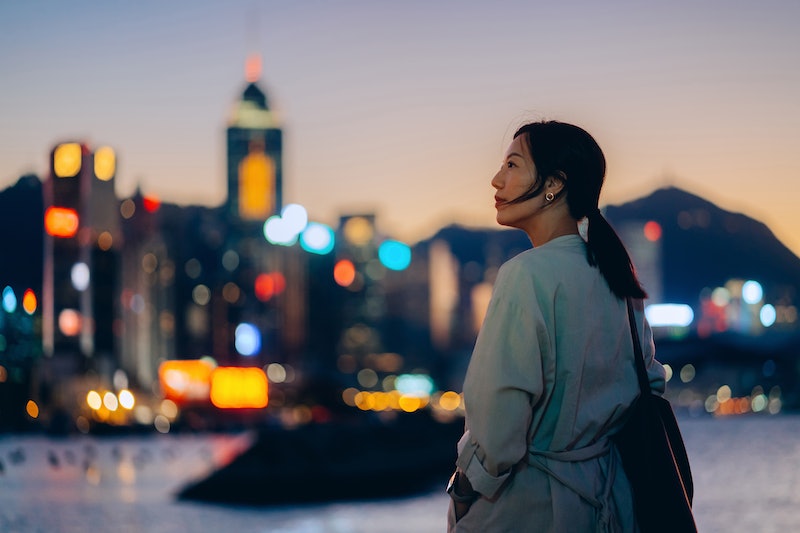 If you've ever been engulfed by crippling self-doubt and anxiety in a room full of people you perceive to be smarter, funnier, or more attractive than you, then you may have suffered from imposter syndrome. But how imposter syndrome affects you can be sneaky and insidious, often striking you without you even realizing it. That niggling little voice in the back of your head telling you that you don't deserve to be there? That's imposter syndrome. The whisper in your mind at work reminding you that everyone else has worked harder or looks better than you? That could be imposter syndrome, too.

Coined in 1978 by two clinical psychologists, Pauline R. Clance and Suzanne A. Imes, the idea of imposter syndrome refers to successful individuals who suffer from an internal or psychological fear of being exposed as less accomplished or talented than other people believe them to be. Clance and Imes' research indicated that it was common among high achieving women (no doubt institutional sexism is at play here); however, men are not immune, either. Other research, for example, shows that graduate students and professors at the start of tenure track positions suffer from it with a degree of frequency. Signs of imposter syndrome to look out for include finding it hard to accept praise, attributing your successes to something or someone else, and overworking yourself to a ridiculous level.

It wasn't until doing some research on the subject that I realized I've suffered from imposter syndrome pretty much my entire life. I often procrastinate over completing large tasks that I suspect will be successful, because I don't feel worthy of really winning. And my constant self-comparisons with others? That stifles my creative output and makes me feel less than deserving of success, too.

If, like me, you've suffered from some or all of these symptoms in public and private spaces throughout your life, you're now probably well adept at pulling yourself out of the abyss of self-doubt in order to get on with your life. But can you recognize key situations in which imposter syndrome can affect you? Once you learn to identify them, you can try and prevent those niggling feelings from taking over your mind before things get really bad.

Here are five surprising ways imposter syndrome may be affecting you:

It Can Become A Self-Fulfilling Prophecy

According to a study published in the journal Frontiers in Psychology, imposter syndrome can stop you from performing well at work, turning — as Science of Us put it — into a self-fulfilling prophecy and leading to a cycle of feeling hopeless. For this study, 238 college graduates' responses on job-related questions were analyzed to measure the impact of imposter syndrome. Participants were quizzed on topics related to career satisfaction, how they defined success, how they felt they were perceived in the workplace, and more. They then measured the ways in which impostor syndrome affected the participants by asking them to evaluate statements like: “I can give the impression that I’m more competent than I really am.” It was discovered that imposter syndrome was high among those who were less optimistic about future job prospects and less satisfied with their current situations.

It Can Affect Your Pay

Interestingly, this same study also found that those who suffered from imposter syndrome also also had fewer promotions to their name and were paid less of a salary on average than those who didn't experience it. This suggests that imposter syndrome can hold us back economically as well as socially without us even realizing it.

It Can Cause Self-Loathing

Imposter syndrome expert Dr. Valerie Young told the BBC earlier this year that her research shows that women are more likely to explain their personal failings as resulting from their own lack of ability or attainment. Meanwhile, men more frequently blame external influences. Unnecessarily blaming yourself for things that may be out of your control in certain situations can lead to stronger feelings of self-loathing and personal disdain.

It Can Keep You In Check

One surprising benefit to imposter syndrome is the fact that those who experience it are often super high achievers who vacillate from unfettered egoism to crippling insecurity. The result? A pretty good equilibrium and a psychologically-imposed system of checks and balances. As BBC Magazine writes, "If you're sufficiently self-aware to worry that you might be a fraud… you may well not be. ... Ultimately, you should probably worry more if someone tells you they've never felt like a fraud. These ultra-confident people may simply be too incompetent to realize how incompetent they are."

So... at least there's that. I guess there really is a silver lining in every cloud.

More like this
I Was All For Medicating Mental Health Issues – Just Not For Me
By Anonymous, as told to Dana Smith
6 Abortion Advocates To Follow On TikTok
By Sara Youngblood Gregory
How To Protect Your Digital Privacy If You Need An Abortion Post-Roe
By Kaitlyn Wylde
The UK Abortion Laws In 2022, Explained
By Sophie McEvoy
Get Even More From Bustle — Sign Up For The Newsletter