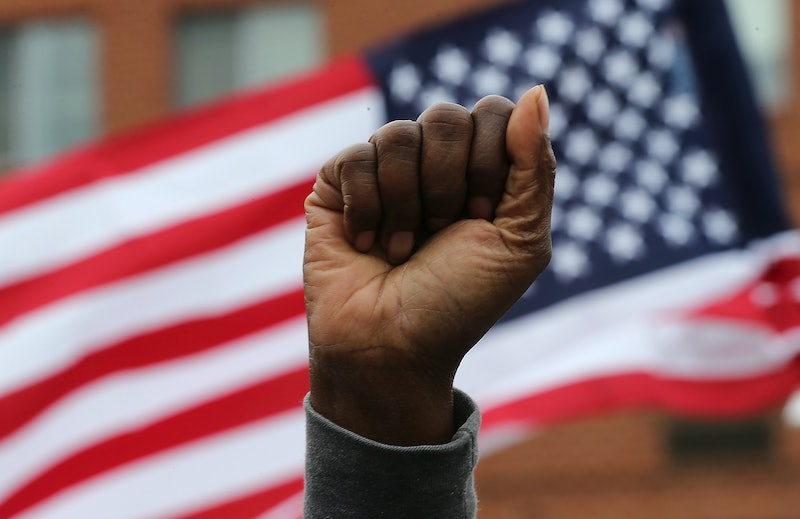 After Election Day, a sense of endless negativity and apocalyptic headlines have dominated our news cycles, and it seems like most Americans are not looking forward to the future. While there is no denying that the new Trump administration will likely negatively impact many lives, there are still positive things happening across the country. The nationwide protests after Nov. 8, while indicative of lingering anger, are still evidence of the millions of people determined to stand up against discrimination. Subscriptions to news organizations have multiplied in the face of Trump's anti-media rhetoric. Almost 200 universities and colleges have vowed to protect their undocumented students. And these are just a few examples of positive news happening in the U.S. right now.

As Hillary Clinton said in her concession speech, "This loss hurts, but please never stop believing that fighting for what's right is worth it. It is, it is worth it. And so we need — we need you to keep up these fights now and for the rest of your lives."

The next four, and possibly eight, years will be tough for those who opposed a Trump presidency, but there are still millions of people dedicated to making progress. Here are six examples of some good things that have happened in government, in the world of science and in American society recently:

In contrast to Energy Transfer Partners' determination to proceed with building the Dakota Access Pipeline, the oil and gas company Devon Energy Corp. has surrendered 15 land leases that would have sought to drill oil in the Badger-Two Medicine region of Montana, home to the Blackfeet Nation. “We’re pleased and proud to celebrate the collaboration that has brought us to this agreement,” said Dave Hager, president of Devon. “We know how important this is to the Blackfeet people, and we appreciate the work the Interior Department has done to make it possible. For Devon, cancellation of these leases at this time is simply the right thing to do.”

With a rate of declining nearly one quarter in the span of 12 years, scientists now believe that they may be discovering what kinds of behaviors help prevent dementia, including Alzheimer's.

4. Women Are Breaking Barriers In Congress

Though Hillary Clinton wasn't victorious on Election Day, there were several other women who made history that night. Catherine Cortez Masto, who beat Rep. Joe Heck in Nevada, became the first Latina senator in America, and the first female senator of her state; Washington state Rep. Pramila Jayapal and California Sen. General Kamala Harris became the first Indian-American women to be elected to Congress; Florida Rep. Stephanie Murphy is now the first Vietnamese-American woman to serve in Congress; and Minnesota state Rep. Ihlan Omar became the first Somali-American Muslim elected to her position in United States history.

In light of the wave of hate crimes that spread across the United States after Trump's election victory, New York Gov. Andrew Cuomo has created an initiative to combat hate crimes throughout the state. He has created a police unit dedicate to battling these crimes, a legal defense fund for immigrants in need, and strengthened protections for students in public schools against hate-fueled attacks.

There are now several apps and websites, like Maven, Nurx, and Lemonaid, that provide women with free or low-cost options for birth control. Users have appointments with doctors through either video or text chats and receive quickly their birth control prescriptions. Nurx actually delivers birth control to its users' homes at no extra cost. With Trump's presidency heightening the need for these kinds of services, we will inevitably see an increase in more apps and virtual clinics to promote accessible women's healthcare.

With the kinds of people and organizations listed above, we still have a lot of positive things to look forward to.

More like this
The Lionesses Are Calling For Equal Access To Football In Schools
By Sophie McEvoy
'The Capture' Is Finally Back – & S2 Looks Tense AF
By Sophie McEvoy and El Hunt
Beyoncé Will Change The Lyrics To “HEATED” After Backlash Over Ableist Slur
By Marina Watts
Your Daily Horoscope August 11, 2022
By Mecca Woods
Get Even More From Bustle — Sign Up For The Newsletter