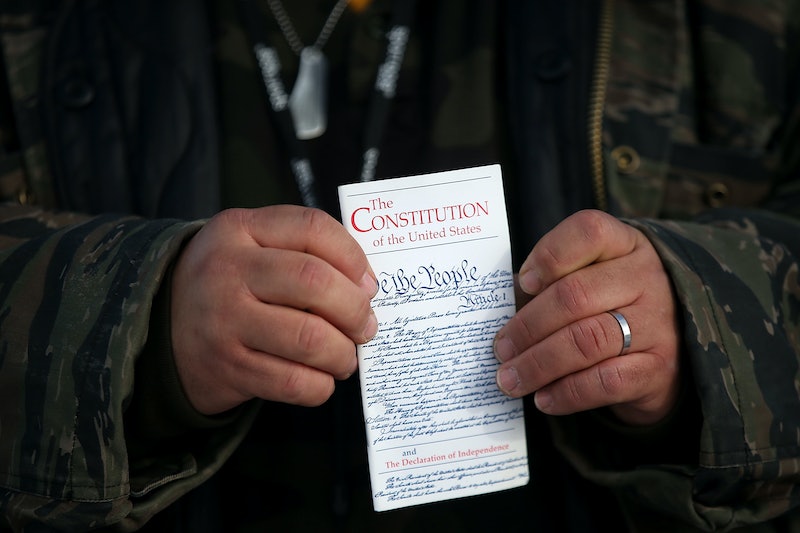 Many of the wild threats and vague policy proposals that Donald Trump floated during his campaign have been speculated to be unconstitutional, but it seems that even without any action on his part, the president-elect could break an important constitutional law on his first day in office. One crucial clause in the founding document, the emoluments clause, could be broken due to the high-profile clientele at Trump's hotels. The purpose of the emoluments clause is to keep foreign money out of American politics, and that could be put to the test on day one of Trump's administration.

The clause, from Article 1 Section 9 of the Constitution, holds that "no person holding any office of profit or trust under [the United States] shall, without the consent of the Congress, accept of any present, emolument, office, or title, of any kind whatever, from any king, prince, or foreign state.” The federal government still takes this pretty seriously, too — there's a whole division of the Department of State in charge of meticulously appraising and cataloguing all gifts received by any federal employee from a foreign source.

Merriam-Webster defines emoluments as "the returns arising from office or employment usually in the form of compensation or perquisites." Under a technical reading of this definition, Trump is in employment of foreign governments when they use government funding to stay at his hotels, which some have now admitted they plan to do in order to win favor with the president-elect.

The idea when this clause was written was to make sure that foreign influence stayed out of American government as much as possible, so that leaders were focused on their people more than anything else. The Founding Fathers had a relatively isolationist foreign policy, and they were working really hard to make sure they established sovereignty in the nation's infancy. Granted, this whole statute seems a little outdated in the context of the globalized economy, as it somewhat conflates foreigners to be untrustworthy and corrupting. What's arguably more troubling in this specific scenario is Trump's massive corporation itself and the influence his business dealings in general may have over his administration. However, the basic principle of accepting money from foreign governments still holds, in that a conflict between business interests and politics could make the president put something other than his constituency first.

The only problem now is whether anything will actually happen to enforce this constitutional clause. A competitor might try to sue, but it's pretty gutsy to sue the President of the United States, even this one. And if there's not enough concentrated public pressure for Trump to divest fully from his business interests, nothing may happen in the end. The unconstitutionality of his actions needs to provoke significant outrage, but there's so much to be outraged about when it comes to Trump, that may just fall to the bottom of the list.