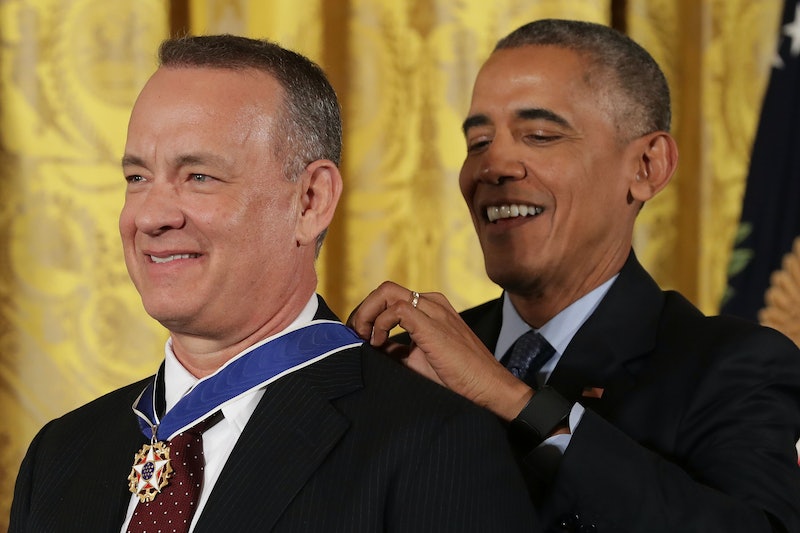 Life is like a box of chocolates: You never know what you're gonna get. And for Tom Hanks, the modern-day Jimmy Stewart and a straight-up national treasure, he was just awarded with the Presidential Medal of Freedom for his work in film. If the above photo of Barack Obama placing the medal around the actor's neck looks familiar, it's because Tom Hanks just became Forrest Gump IRL — literally becoming the real-life version of one of his most famous characters, who is awarded the Congressional Medal of Honor by Lyndon B. Johnson in the movie after he was shot in Vietnam.

The comparison (complete with side-by-side images of each moment, natch) was tweeted by Fusion editor Katie McDonough, and it's one that's impossible to unsee. Not that anyone would ever want to, of course: It's gold. Talk about life imitating art — maybe for his next foray into Tom Hanks-characters-coming-to-life, we'll all find out that he's secretly been a talking cowboy toy this entire time. I mean, you never know.

For Forrest Gump fans eager to relive the moment, Hanks' honor didn't exactly go down like his character's did (fortunately, there was no mooning the president in the real-life version). But you can believe it was still pretty darn similar — only with more smiling from Hanks, and even a Toy Story quote thrown in there.