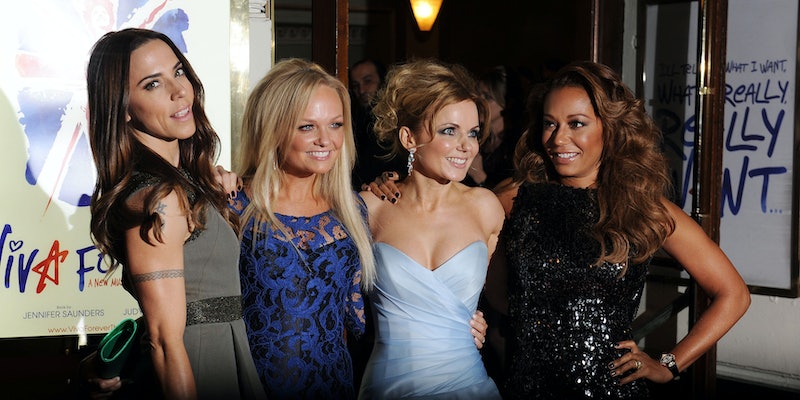 Get ready to throw on some platform sneakers and shriek "girl power" while throwing the peace sign at people passing by. There's new music from the Spice Girls that you're going to want to hear. Well — there's new music from three of the five members of the iconic girl band at least, which is good enough for me. Featuring Geri "Ginger" Halliwell, Emma "Baby" Bunton and Melanie "Scary" Brown, the three Spice Girls form the trio GEM (with the first initial of their names making up that adorable title), and it looks like their first song may have just leaked.

Though the track, which is titled "Song For Her," has yet to be confirmed by the band online, the sound of the song is unmistakable. Not only does it feature the notably familiar harmonies of the three singers, but it also features the sort of positive and uplifting lyrics that make it an instant "girl power" pop anthem. It's a song that's likely to strike a chord with the generation of women who may have grown up idolizing the Spice Girls back in the '90s. Girl Power has grown up, guys, but it sounds just as emboldening and feel-good as you remember.

"Song For Her" explores the feeling of being nostalgic for the carefree, youthful girl you used to be while celebrating the powerful woman you've become. Its lyrics are incredibly easy to relate to. They also make the suggestion that, though we can all reminisce about our youth, deep down inside, all of us still possess all the great qualities that we did when we were younger. Just now with the added, assured distinctions of maturity:

Stay out all night, careless and carefree togetherWhere is that girl? Is she long gone or missing?You can't bring her back, you're just reminiscingThere in the mirror, she's shouting, 'I've been here forever'

The lyrics might be the perfect fit for fans who grew up adoring the band, but they also seem to fit the band themselves. After all, both Melanie "Sporty" Chisholm and Victoria "Posh" Beckham openly declined the offer to reunite with the rest of the band. In fact, Chisholm penning an essay for LOVE Magazine explaining the "difficult decision" not to join them (in the same essay, she also mentioned how Beckham was concentrating on her fashion label, instead). And damn if that sort of decision isn't full of maturity.

With that in mind, "Song For Her" very much reinforces those feelings of being so nostalgic for the past that you're eager to relive those days in some manner, but also with the foresight of maturity. All women can relate to the fact that, whether you're a Spice Girl or otherwise, sometimes, as you get older, it can be hard to get the old gang back together for a catch up, holiday, night out or whatever else.

But thankfully, "Song For Her" acknowledges that idea, embracing the concept of change alongside maintaining the status quo of the familiar. As such, the song perfectly embodies that familiar spirit of the Spice Girls while embracing the new and changed form of the band as GEM. When they sing, "You've got that boom-boom-pop," it sounds so reminiscent of the bubbly Spice Girl cadences of a phrase like "zig-a-zig-ah" that my heart impulsively leaps out with all the exuberance of my 9-year-old self the first time I heard "Wannabe."

Like the women in the song that they're singing about, GEM also represents a grown-up vision of evolving womanhood. And like those catch-ups with old friends that we'll no doubt all do over Thanksgiving, Christmas, and New Year, hearing this new GEM song provides a loving throwback to the past, while also celebrating the present and the future of those relationships.

Whether that relationship is the one we have with a favorite pop band from childhood, a lifelong friendship, or the one we have with our own sense of self, one thing is certain: growing up doesn't mean losing sight of who you are. And from the sounds of it, GEM definitely haven't lost sight of The Spice Girls.

More like this
Now That 'Renaissance' Is Here, Let’s Revisit Beyoncé’s First Solo Album From 2003
By Grace Wehniainen
The Spice Girls & Adele Lead Girl Power Celebrations For Lionesses’ Euros Win
By Sophie McEvoy
Josh Peck Shows Love To Jennette McCurdy After Her Shocking 'iCarly' Revelations
By Radhika Menon
At 14, D'Arcy Carden Was Sneaking Out To Parties & Crying Over Kurt Cobain
By Ivana Rihter
Get Even More From Bustle — Sign Up For The Newsletter