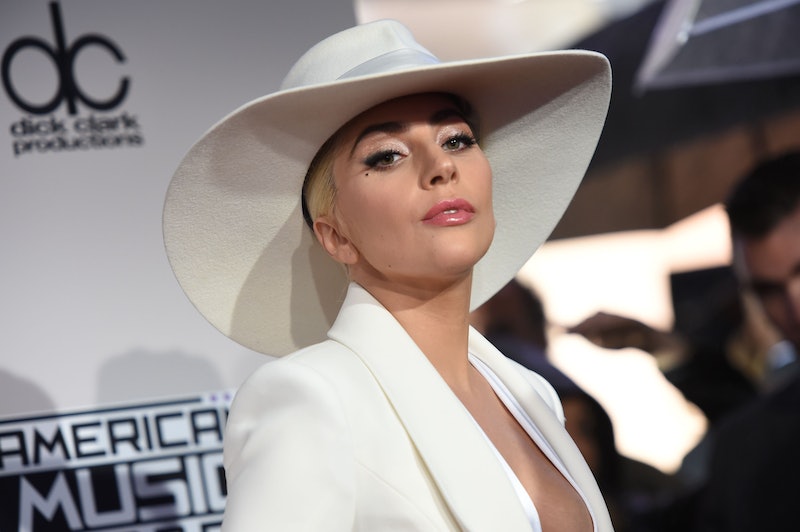 The queen has spoken, so everybody listen up. On Wednesday, Lady Gaga tweeted Kanye West support after he was hospitalized for exhaustion on Monday, Nov. 21 and canceled the remainder of his Saint Pablo tour. The Joanne artist has a few words of wisdom for anyone who may not be taking West's hospitalization seriously. In typical Lady Gaga fashion, she used social media in a positive way showing others why it's so important to send love West's way and not hate. "It's not funny to joke about anyone's possible or not possible mental illness, this is a sensitive time for many," her first tweet reads. "Let's be kind & loving."

It's always important to be compassionate toward others, especially when you have no idea what they're feeling or going through. Plus, details surrounding West's health have yet to be divulged (all we know is that he was hospitalized for exhaustion) so why send any negativity his way? If anyone can relate to West taking time to get better, it's Gaga. She understands what it's like to face health issues, including depression, and to take a step back from her career. She told The Mirror in September 2016, "When my career took off, I don’t remember anything at all. It’s like I’m traumatized. I needed time to recalibrate my soul. I definitely look after my well-being." The "Million Reasons" artist added, "I openly admit to having battled depression and anxiety and I think a lot of people do. I think it’s better when we all say: 'Cheers!' and 'fess up to it.'"

Lady Gaga didn't just write one supportive tweet, as she also posted, "While I don't agree with everything he does I hope the public shows compassion and [heart emoji] for @kanyewest and each other. One love. One Race." This tweet says a lot and should encourage people to treat each other with respect, no matter how you may or may not feel about them. There is never a need to be unkind.

Gaga then tweeted her love for West by writing, "@kanyewest i support & love u brother, I see in you bravery & courage to stop this tour & take care of YOU. You are a GREAT artist."

Basically, Lady Gaga is all about kindness, especially during a difficult time, and we all should follow in her footsteps.

At the time of West's hospitalization report, Bustle reached out to the rapper's rep for comment, but did not receive an immediate response. However, his rep anonymously told The New York Times that West's doctor is the one who reached out to the police and that West willingly went to the UCLA Medical Center for evaluation.