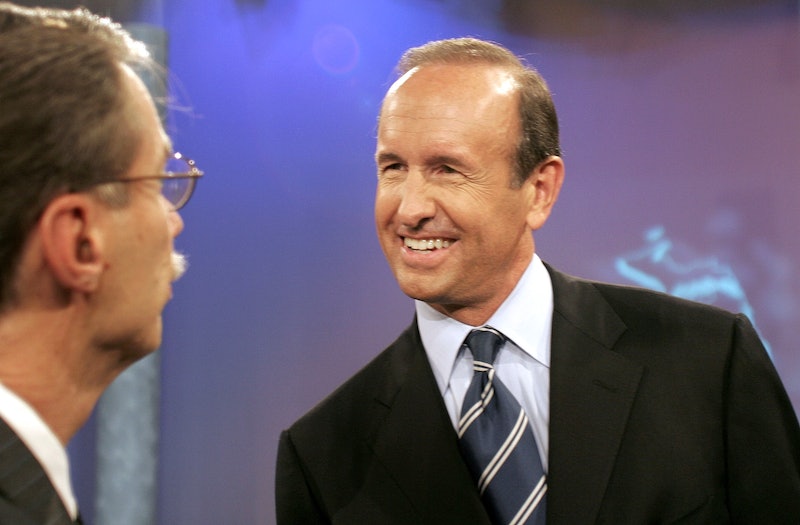 Donald Trump's latest cabinet-level selection won't be a familiar name to many, despite her family's high status in American business and society. Despite their wealth and political activism, this powerful family has largely stayed out of the limelight until now, but Dick and Betsy DeVos have been some of the biggest conservative political donors in the country for decades. So who is Dick DeVos? The conservative bankroller made his name in politics by donating millions of dollars.

DeVos, whose dad currently comes in at number 88 on Forbes 400 List, made his money the same way Trump did — by inheriting it. His father Rich DeVos started Amway, a multi-level marketing company, which his friend Jay Van Andel in 1959. The company quickly grew and expanded internationally, and Dick took over the business in 1993. He's also involved in a variety of other business ventures, including a full ownership of the Orlando Magic NBA team and the Windquest Group, an investment management firm.

The DeVos family is perhaps best known for their philanthropic work in education. DeVos and his wife Betsy have been prominent advocates of "education freedom," working to allow students to use tax dollars to attend private and charter schools. The couple even founded their own charter school, the West Michigan Aviation Academy, which exposes students to a traditional curriculum with special attention to engineering through the context of flight mechanics. DeVos also tried unsuccessfully to run for Michigan governor in 2006, but lost to the incumbent governor Jennifer Granholm by 14 points.

But the most impactful part of the DeVos legacy is definitely the money. His parents' charity, the Richard & Helen DeVos Foundation, gives millions each year to conservative charities like Focus on the Family and the American Enterprise Foundation. Fellow billionaire and conservative bankroller Charles Koch specially thanked Rich DeVos at a secret, rich guy seminar for donating over $1 million to conservative causes in 2011. According to Open Secrets, the couple nearly doubled that amount in 2016, sending $1,995,000 to outside groups. Dick and Betsy DeVos also gave $1,597,798 this year, all to conservatives too.

Although DeVos himself is unlikely to have a position in Trump's administration alongside his wife, that definitely doesn't mean he won't continue to be politically active, particularly with his spare change. The Republicans already know they're in for a serious fight to hold on to the White House in four years, and they'll be counting on high rollers like DeVos to get them through. His wife will have the official role, but DeVos will more likely than ever continue working behind the scenes to keep the train rolling.