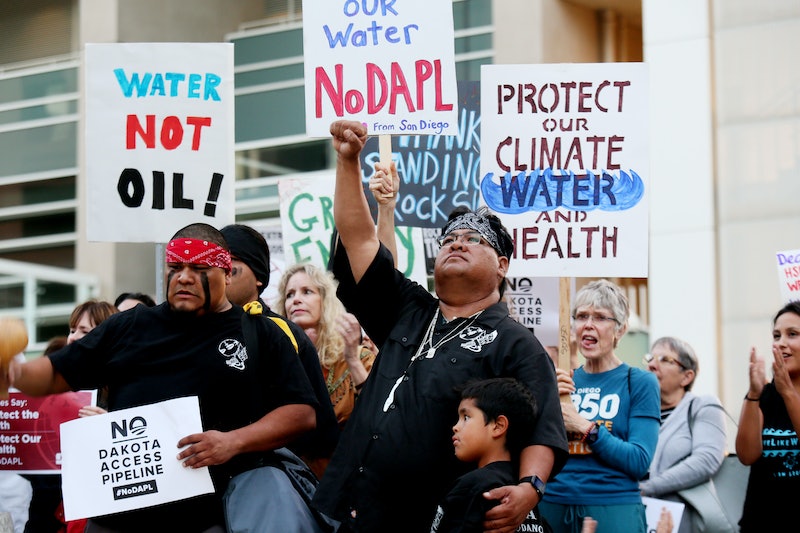 As people across the country prepare to take a seat at the table and over-eat, it's important to remember that injustice doesn't sleep on Thanksgiving. In fact, the holiday itself is one that was founded on the colonization and genocide of Native American communities. While some may believe that this history is behind us, in 2016, Native American tribes are still taking a stand against the colonization of their land. For months, communities have fought the Dakota Access Pipeline that would destroy sacred land of the Standing Rock Reservation. So here's how to help Standing Rock protestors right now.

Water protectors have been protesting at Standing Rock since April 2016 against the Dakota Access Pipeline. The protest started with members of the Standing Rock Sioux Tribe but has grown in the months that followed to hundreds of people from various Native American tribes across the U.S. Specifically, protestors at Standing Rock are fighting the construction of a $3.7 billion project "that would carry 470,000 barrels of oil a day from the oil fields of western North Dakota to Illinois," the New York Times reports. The project could have detrimental environmental effects and risks destroying sacred Native land.

As the protests continue, police departments across the country have deployed their officers to face off against peaceful protestors in what has developed into an increasingly militarized police presence. On Sunday night, police sprayed demonstrators with tear gas and water cannons, resulting in an estimated 300 injured people.

Here are concrete actions you can take right now to help demonstrators.

One way to help demonstrators, medics, and communities at Standing Rock is to donate to their cause, for medical purposes, for supplies, and for food. You can donate to the official GoFundMe of the Sacred Stone Camp. The page notes that donations will go toward "water, propane, food and blankets for the camp." The page also notes, "This is a prayer camp movement to save our sacred land and water and has been entirely supported by the people and the campers."

If you have the means, donating to the cause will go a long way.

President Obama has yet to call off the construction of the Dakota Access Pipeline and has not spoken out against the militarized actions that have targeted peaceful protestors in recent days.

One way to have a powerful impact everyday — and on this Thanksgiving holiday in particular — is to call the President's office with concrete demands to demilitarize and call off the pipeline. Express your concern, express your disappointment, and your anger. If Obama received calls from Americans across the country on Thanksgiving, think of the impact.

Organizer and writer Kelly Hayes has compiled a list of sheriff and police departments across the Midwest who have sent their officers to Standing Rock. Hayes wrote in a Facebook post, "We have seen that these deployments are vulnerable to public pressure. Blast the f*ck out of their phone lines, tell them what you've seen happening on the front lines and demand that they bring their people home NOW."

Some of the departments on the list include the following:

Water protectors at Standing Rock have a list of supplies that you can find and send items directly through Amazon. The list includes a variety of supplies, including respirators, tarps, gas masks, and blankets, among others.

One way you can make an impact is by funding these necessary supplies and ensuring that they get to the people who need them.

Pressure Your Bank To Divest

The Dakota Access Pipeline needs funding if it's going to be built, and while some powerful politicians may not have taken a stand against its construction or called it off, you can put pressure on your bank to do so.

You can call these banks and demand that they divest, or you can go into your bank today and take a video of yourself taking your money out. Tell your bank you are taking your money to a local union until larger, corporate banks divest from the Dakota Access Pipeline. Concrete financial actions such as this speak loudly to the capital financiers.

Demonstrators are out on the frontlines even as the U.S. celebrates Thanksgiving and they are facing a militarized police presence. Police have already threatened to use water against demonstrators today.

Get involved in the aforementioned ways, and to stay updated on events and necessities as they come, you can text "Water" to 82623.