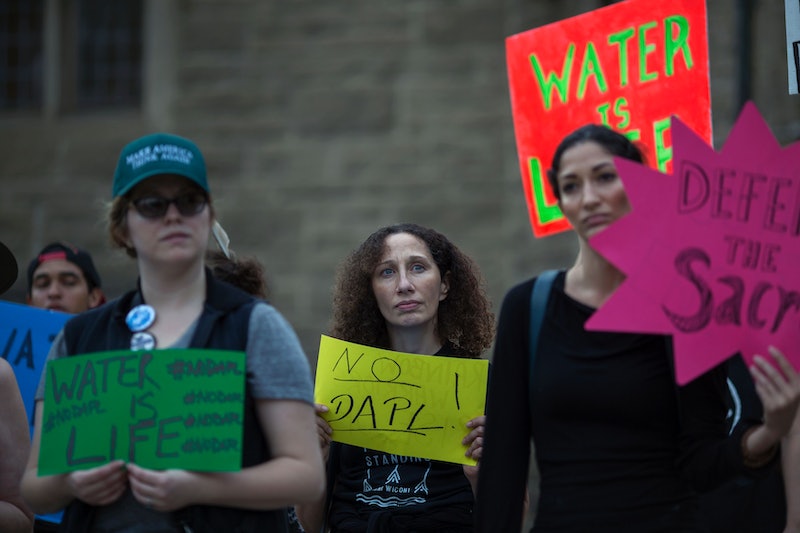 The Standing Rock Protesters are still recovering from being doused with water by local police officers Sunday night into Monday morning. More than 300 people were treated for hypothermia after being shot by water hoses as temperatures reached well below freezing. And believe it or not, it actually gets worse. They're of course fighting to stop construction of the Dakota Access Pipeline — and pressure has risen against them since members of the state government asked President Obama to get involved. But all hope is not lost. Here's how you can donate to Standing Rock Protestors in North Dakota.

The main way to donate is directly to the group of Sioux Indians and their supporters that are at the camp through a GoFundMe page. They've already raised more than their $2 million goal, but keep in mind that they started raising funds in April, and protesting will be much more difficult through the winter. You can also choose to buy something from their Amazon.com wish list, although the most recently added items are quite pricey — there's a lot of camera equipment that could be used to document standoffs with police. Two more options are the group's legal defense fund and a direct donation to the Standing Rock Sioux tribe.

Right now, besides the protests, the only thing keeping the pipeline from being constructed under the Missouri River reservoir — just half a mile north of the Standing Rock Sioux reservation — is the Army Corps of Engineers. They said last week that more time was needed to study the project to ensure the area's safety. Republicans Gov. Jack Dalrymple, U.S. Sen. John Hoeven and U.S. Rep. Kevin Cramer asked President Obama to authorize the Corps to approve the crossing.

Thus far Obama's been monitoring things from D.C. and waiting for things to play out, indicating he would wait weeks before making a decision. The North Dakota officials, on the other hand, would like him to act. Dalrymple, Hoeven, and Cramer wrote:

Building more permanent structures to protect against the cold is what started the most recent build-up in tension with the police. "Protestors at the camps are erecting unlawful structures in an attempt to fortify for the coming winter weather, but their actions are both illegal and likely insufficient to protect them from the elements," Morton County Sheriff Kyle Kirchmeier told Buzzfeed last week. Then Sunday protesters started to move burned out vehicles from a bridge to make it easier for ambulances to past. The police argue that the bridge needs to be checked for structural issues first, and that's when they stepped in.

Thursday two celebrities, Jane Fonda and Shailene Woodley, will be at the camp to serve Thanksgiving dinner to some 2,000 protestors. The attention — especially during a holiday theoretically based on cooperation with our country's native peoples — won't hurt. But for the protests to successfully continue into winter, money is needed too.