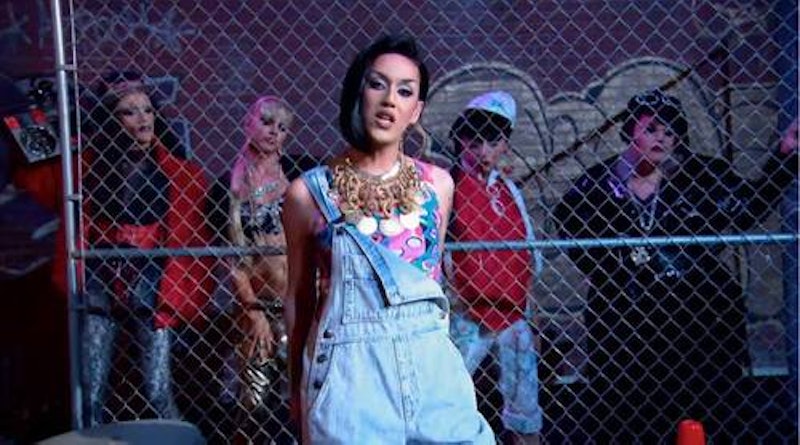 If you were to ask me, "Do you think it'd be cool if we asked the Drag Race queens to channel-by-which-we-mean-caricature '90s hip hop?" my response would have been, perhaps verbatim, "Oh no she betta don't." And yet, she betta did. Indeed, this past week of RuPaul's Drag Race features the contestants doing their basest approximation of ye not-so-olde hardcore lady rap — which I suppose was ultimately tempered by the guest judges, the truly legendary Eve and Trina. Plus, we got to see Joslyn flourish once more ("motha-fishin'" was real nice), and Michelle got to relive some former glory days by expounding upon the fact that she was once a "B Girl" (track 9 on the Bodyguard soundtrack, apparently, in case you were curious).

Which was all well and good. I mean, believe me, I could go on for ages about the stilted elbow-y gesturing; the verses that came across more like Fred Armisen in Portlandia 's "History of Hip Hop" sketch than anything else (Wu Tan Clang, anyone?); the perverse pleasure I took in Laganja "I describe myself as 'ghetto'" Estranja's assurance that she would do well juxtaposed with her ultimately forgettable fumblings; Darienne near-pratfalling in her pleather gown. I could read, I could read, I could read — I could shuttle these queens through a lengthy post-doctorate thesis regarding each and every one of their Eve-aping foibles.

However, this episode also brought us the much-anticipated "Reading Challenge," in which the contestants are given some ornate eyewear and asked, in the great tradition publicized/popularized by Paris Is Burning , to expertly rake one another across the coals. Though no one will ever — EVER — upstage Season 2's Jujubee read-ya-to-filth, at least in my eyes, these queens clearly did their homework, with some truly excellent capital-S Shade. Even the reads on Darienne, though frustratingly size-related, were for the most part ultimately rhetorically clever. So with that, I'll just humbly open the library, and let the girls speak for themselves:

"Darienne Lake — this is the girl who probably sits reverse cowgirl on the toilet, just so she can have a flat surface to eat off of." — Joslyn Fox

"Bendelacreme, you remind me of a Russian Doll: Full of yourself." — Darienne Lake

"And then there's Adore: I know what you got on your SATs — ketchup." — Bianca Del Rio

"Darienne Lake, you should be arrested for animal cruelty. The way you abuse those kitten heels on the runway is absolutely criminal." — Milk

"Bendelacreme, the cream always rises to the top — but so does the scum." — Courtney Act

"Adore, you know you're from the West Coast, because it's a three hour delay before you finally get a joke." —Joslyn Fox

... And my honest personal favorite, Trinity's self-read regarding her own clip-on ponytail — because "If you can't read yourself, how the hell can you read anybody else?"

However, amid all of the excellent laughs and snaps and "Ooooh, bitch!"-ery came a genuine and pure tragedy. Yes, I am talking about Milk — poor, unjustly eliminated Milk, whose brilliant satire-drag will forever be as etched in my memory as that liner was around her lips. Seriously though, I was right there with her for every perfectly lip-synced beat of Salt N Pepa's "Whatta Man," and though I agree that Trinity may have bested her in this particular wee performance, wasn't her "out-of-the-carton" camp persona well worth preserving, over Trinity's "I promise I'm better than this" poutiness? Maybe it's just personal preference, but I'll take slightly awkward dress closures over re-re-repeated excuses that Ru feels the need to abruptly and openly cut off any day of the week.

And yet, we soldier on, heads held high, to read and rhyme and recap another day. Plus, next week looks to be a helluva doozy: two episodes and two Untuckeds, making three overall hours of Drag Race? Hold onto your wigs, ladies; this is about to get real real, real fast.

More like this
What’s New On Netflix: 'Stranger Things' & 'Somebody Feed Phil' Return
By Arya Roshanian
What’s New On Netflix: A Victoria Justice Rom-Com & The Return Of David Letterman
By Arya Roshanian
Jennifer Aniston Joked About Ending 'Friends' With Therapy & Divorce
By Grace Wehniainen
Lisa Kudrow Doesn't Remember Filming 'Friends'
By Sam Ramsden
Get Even More From Bustle — Sign Up For The Newsletter