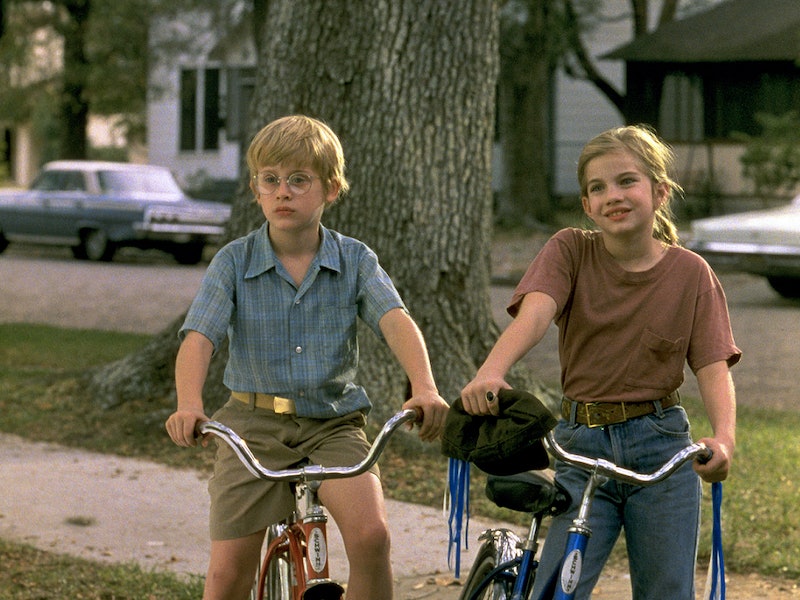 Remember when you watched My Girl as a kid and it totally wrecked you? It may be one of the darkest kids movies of the '90s, but it's definitely one of the best — and this film really stands the test of time, heartbreak included. On the 25th anniversary of My Girl, there's no better time to rewatch this classic and conclude Thanksgiving weekend by crying your eyes out — because the most heartbreaking moments from My Girl will definitely still make you tear up (or, in my case, spend a solid hour ugly crying for approximately an hour after the closing credits rolled).

This was one of my favorite movies as a tween — mainly because Vada was one of the most refreshingly complex, unique, and lovable female characters I'd ever seen on screen. Like every other viewer, I cried my eyes out when her best and only friend Thomas J. died after he attempted to find her beloved mood ring. But, upon rewatch as an adult, I realized there are no shortage of heartbreaking moments prior to Thomas' death — from Vada's pervasive belief that she killed her mom (who died from childbirth complications) to some seriously dark moments of foreshadowing, I think I cried more as an adult viewer than I did as a kid.

The movie's closing message is hopeful and beautiful, but let's take a tearful walk down memory lane and recall My Girl's eight most heartbreaking moments.

Vada's first poem at Mr. Bixler's adult writing class is a lovely rhyme about why she loves ice cream, but he challenges her to use her writing skills to express her innermost secrets and fears. Through a voiceover, Vada tells viewers, "I'm afraid I killed my mother." Cue the first round of tears (but certainly not the last).

Hanging out at their favorite spot, Vada struggles to save the life of a fish that Thomas caught and cuts herself in the process. As she tends to her wound, she asks Thomas to make sure the fish got away — but Thomas and the viewers see it's dead. He assures her that it got away, and Vada asks Thomas to become blood brothers. They declare themselves "blood brothers for life" and the camera cuts to the fish floating in the water. There's something seriously dark, symbolic foreshadowing that my tween self didn't pick up on.

In yet another heartbreaking moment of foreshadowing, Vada shows Thomas a photo of her parents and tells him that her mom is in heaven. When he asks her what she thinks it's like there, Vada describes it as a place where everyone gets their own horse to ride (it doesn't matter if you fall off, because you just land in the clouds) and eats marshmallows everyday. "There are no teams in sports, so no one gets picked last," she adds.

After Vada and Thomas share the most adorably awkward kiss (just to see "what the big deal is about"), he asks her if she'll think of him if she doesn't get to marry Mr. Bixler, the teacher who she has an adorable crush on. The smile on Thomas' face after she answers "I guess" is one of the movie's sweetest moments.

5. When Vada's Dad Tells Her About Her Best Friend's Death

Thomas ventures into the woods on his own after Vada loses her beloved mood ring — he successfully locates it, but a swarm of bees attacks him and I don't have to tell you what happens next. (Really, please don't make me — I've cried enough already today.) When she's first informed that Thomas got stung, she provides a typical Vada response: “I told him to stay away from those bees. Maybe I should go over and yell at him.” When it finally sinks in, she runs to the doctor and hyperventilates as she tells him how badly the bee stings hurt and repeats over and over that she can't breathe. For once, Vada's not being a hypochondriac — she literally feels her best friend's pain, and it's beyond heartbreaking.

Vada finally emerges from her room to make an appearance at Thomas' funeral and she panics when she sees that he's not wearing his glasses. She begs anyone and everyone who's listening to put on his glasses because he can't see without them before running out of the room. Meanwhile, viewers collapse in tears once again because this is literally too much pain to bear.

A few months after Thomas' death, his mom gives Vada her mood ring which was recovered from his body. As she puts it back on, it's blue for the first time in the entire movie. She promises to come visit Mrs. Sennett and then assures her that Thomas will be OK because "my mom will take care of him" in heaven. Vada, you are wrecking me with these bittersweet moments. I'm going to need a moment to collect myself.

Vada returns to writing class for just long enough to read her new poem, "Weeping Willow" — a tribute to Thomas and the tree where they spent so much time together. It concludes with the beautiful sentiment that she can move towards happiness while simultaneously holding her best friend in her heart for life. Then Vada heads off to ride bikes with Judy, a sign that the poem came straight from her heart.