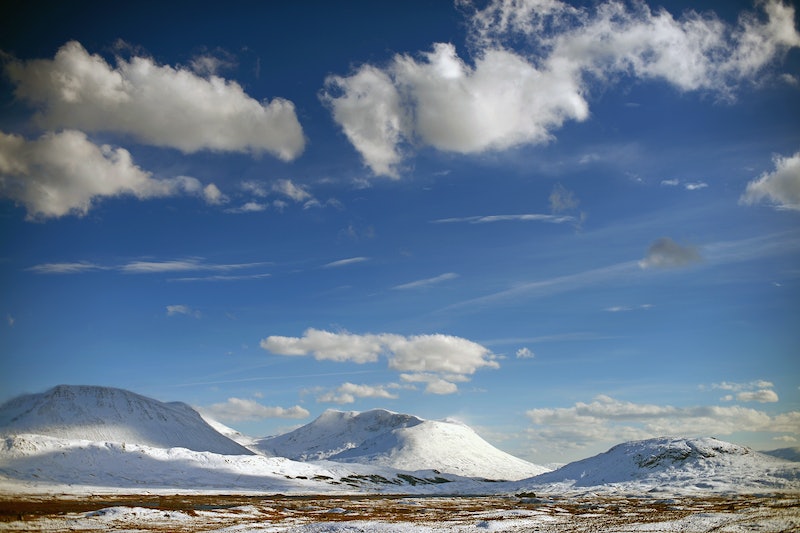 Between Thanksgiving dinner and the madness that is Black Friday, you could probably use some proof that good still remains in the world. To that end, allow me to present to you this photo of a white rainbow captured over Rannoch Moor in Scotland, because it's beautiful enough to ease even the most uncomfortable Thanksgiving memories (aka any time some misguided relative brought up the presidential election).

During a photoshoot near Glencoe, Scotland, landscape photographer Melvin Nicholson captured a spectacular moment: A white rainbow, appropriately named a "fogbow," arching above a single tree. Although most people associate rainbows with colors, a white rainbow is a totally natural phenomenon. According to NASA, they're caused by the sun filtering through the tiny droplets of water that cause fog or mist; because these droplets are smaller than the moisture that causes rainbows, fogbows appear white or colorless. The fog itself isn't in an arch, but the fogbow appears in that shape because those drops divert the sunlight best toward the observer. (By the way, here's a fun fact to throw around at parties: Rainbows and fogbows only appear opposite the sun's rays.)

So what does a rainbow look like without its colors? Nicholson posted the photo on Instagram and Twitter, so you can see the answer for yourself. "I captured an unbelievable White Rainbow (Fogbow) on Rannoch Moor today," he tweeted.

The photo received widespread attention online, with hundreds of retweets and more than 1,000 likes on Instagram. "It's an amazing thing to witness... As soon as I saw this wonderful isolated windswept tree, I knew that it had to be framed by the fog bow," Nicholson wrote on Facebook.

Fogbows aren't the only rainbow variation you've never heard of. When sunlight hits ice crystals rather than raindrops, rainbows can appear upside down in the sky, and moonbows appear when raindrops divert light from (you guessed it) the moon. Of course, I would be remiss not to note the most famous kind of all: The double rainbow. Some of these are rarer than others — double rainbows, for example, are pretty common — but they're all worth stopping and admiring for a while.

To see more of Nicholson's photography, head over to his website. In the meantime, I'll be keeping an eye out for fogbows this winter. If that's not Instagram worthy, nothing is.

More like this
21 Funny Memes To Text Your Dad On Father's Day
By Chelsey Grasso, Syeda Khaula Saad and Siena Gagliano
What Is A “Softboy?” The TikTok Term & Aesthetic, Explained
By Courtney Young
Why Are TikTokers Slapping Each Other With Tortillas?
By Courtney Young
Coastal Granddaughter Is The Latest Summer Aesthetic Going Viral
By Emma Garza
Get Even More From Bustle — Sign Up For The Newsletter