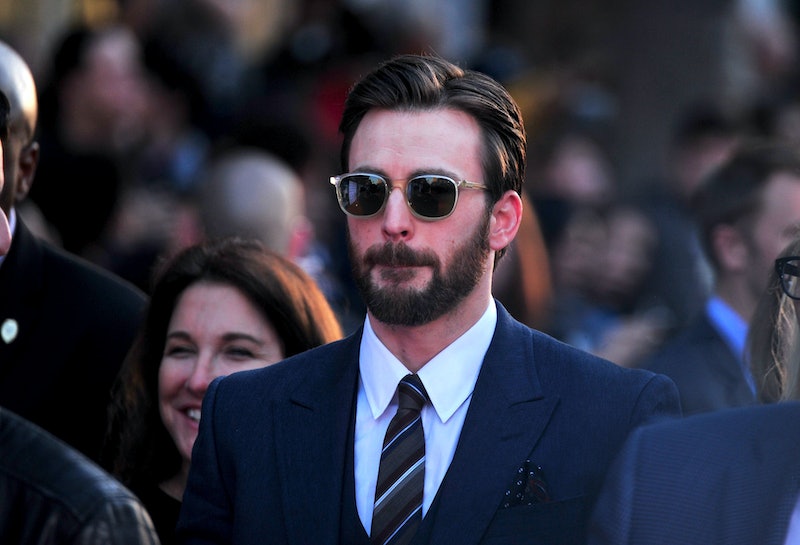 Monday was a busy day in the media for Chris Evans. In anticipation of the April 4 release of Captain America: The Winter Soldier, Evans appeared on Good Morning America and The Tonight Show Starring Jimmy Fallon, probably so he could set the record straight on a few things. First up: giving a definitive answer on the recent speculation that Evans will be quitting acting: "By no means am I planning on retiring. It's kind of a silly statement."

During his Good Morning America appearance, Evans discussed his positive response to getting a chance to direct the movie 1:30 Train last year and the fact that he was interested in doing more of it. Somehow, to his confusion, this was interpreted as him saying that he was "hanging up the shoes."

Next up, Evans appeared on The Tonight Show with his mother Lisa and his brother Scott with whom he played The Sibling-wed game — and lost pretty badly. Why? The Evans brothers couldn't decide on which of Chris Evans' childhood stunts were the worst. The interview turned into less of a trivia game and more into a Chris Evans rap sheet, as most of the stories they shared concerned the bad behavior of the face behind one of Marvel's most angelic and genuine superheroes.

The one point that the Evans brothers achieved was over the meanest prank that Chris ever played on Scott — tricking him into wetting his pants. The kicker, for Scott, was that he was past the age where that kind of thing would have been acceptable. Chris knew immediately which prank that Scott had chosen and threw his head back laughing as he said, "I know what it is! I know what it is... and we were too old."

Perhaps the best part of the game was that pants wetting was not the worst thing that Chris did to Scott when they were little. The Evans brothers disagreed on which stunt of Chris's got them in the most trouble as children, but they at least agreed that all the stories were Chris's fault. Captain America would be ashamed.

Watch all three of the interviews below.