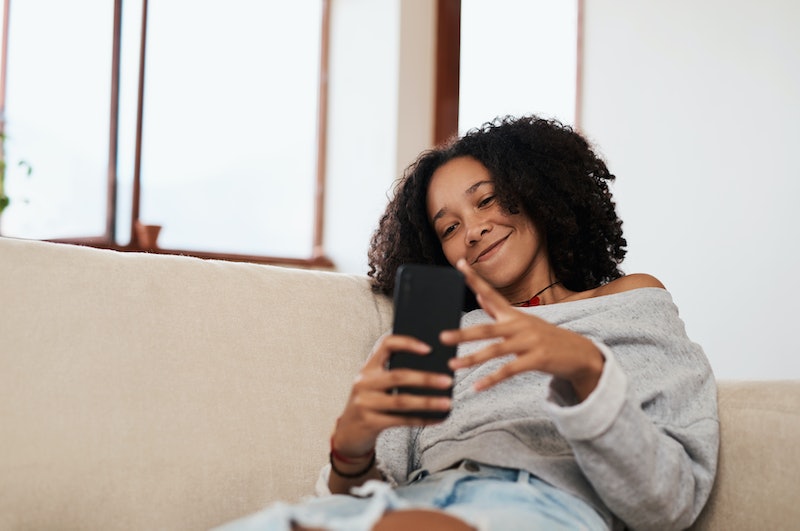 In the week since Instagram announced the addition of live video and disappearing direct messages, there's been less focus on the update itself and more on a single, vitally important question: Does Instagram tell someone when you take a screenshot now? I'll give you the short answer first, because this is the kind of information you need to know ASAP: Yes, the Instagram update includes an update about screenshot notifications — but only when someone screenshots a disappearing photo (aka a story) that's been directly messaged to them. Keep reading.

With the latest update, when you've created an Instagram story, you can swipe right and send the photo or video through a direct message rather than sharing it to your public story. To keep it "spontaneous and pressure-free," these messages disappear after they're seen by the recipient. Once a direct message is sent, Instagram explains in the Help Center, you can go into your inbox where its status is displayed and "see if they were delivered, opened, replayed or if someone took a screenshot." This brings us back to the part that's freaking everyone out. According to BuzzFeed, if the recipient replays or screenshots the message, the sender gets a notification sent to their phone and within the Instagram app.

Here's what those notifications look like, by the way. Let's say you use Instagram Stories to take a pic that you decide to send directly to your friend instead of posting publicly. If they take a screenshot of your disappearing photo, this is the notification you'll receive:

The notification system will be familiar to anyone who uses Snapchat (i.e., everyone). If you saved someone's private DM photo or video to analyze in a group text later, the sender got a notification about it and is totally aware of your stealthiness. So yes, any screenshots you've taken of stories you've received via DM over the last week have turned out to be rather less stealthy than you may have hoped. But here's the good news: The important part here is that it only applies to stories sent via DM. You can still screenshot someone's regular photos or public stories to your stalkerish heart's content, and they'll be none the wiser — unless you accidentally include them in the group text about it.

So, trust, there's no need to panic. Just be smart about what you're screenshotting.

In case you missed it, Instagram recently launched another feature: Live video, which allows users to stream in real-time to their Instagram Stories, and disappearing messages. To access the live video function, just swipe right from the home screen to get to the Story camera, where the "live" option should be at the bottom of the screen, next to "boomerang" and "normal." Unlike Facebook Live and Periscope, Instagram Live doesn't allow replays, so followers have to tune into the stream while it's happening or miss it entirely.

So if you plan on partaking in the great art of overanalyzing social media, maybe skip the screenshots and stick to the tried-and-true technique of opening your messages with your best friend looking over your shoulder.