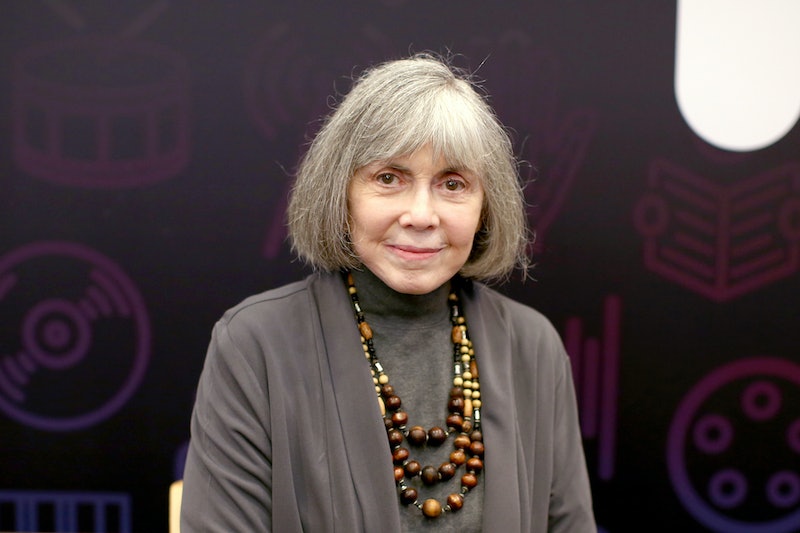 In a Facebook post on Saturday, writer Anne Rice revealed that a Vampire Chronicles series might be coming soon. Rice, who wrote the first installment of the bestselling series in 1976, revealed on Facebook that she had the books' rights and intention to create a TV show out of them. It's a thrilling announcement from the beloved author, and fans should start getting excited about the upcoming show. Wrote Rice on Facebook,

The theatrical rights to the Vampire Chronicles are once again in my hands, free and clear! I could not be more excited about this! --- A television series of the highest quality is now my dream for Lestat, Louis, Armand, Marius and the entire tribe. In this the new Golden Age of television, such a series is THE way to let the entire story of the vampires unfold.

For those unfamiliar with The Vampire Chronicles, Rice wrote Interview with the Vampire, the first book in the series, in 1976. The series follows French vampire Lestat de Lioncourt and his fellow vampires over the course of 11 books and counting. You might be familiar with the 1994 movie adaptation of Interview with the Vampire, which starred Tom Cruise and Brad Pitt. Other film versions of the series have been made, and in 2014, Universal Pictures acquired the series' rights with the intention to develop them into films. However, Rice's post clarified that that deal didn't work out. "It is," she explained, "more than ever, abundantly clear that television is where the vampires belong."

Rice and her son Christopher Rice will serve as executive producers and write the pilot script on the new series. The author explained her intention to include all the many scenarios, characters, and plots in the books in a "Game of Thrones style faithful rendering of this material." She also described herself as "filled with optimism this morning about the future for my beloved Brat Prince."

It's great to see Rice so enthusiastic about her upcoming creation, especially considering the influence she's already had on pop culture throughout her career. The "sympathetic vampire" phenomenon that has manifested in massive hits like Twilight, True Blood, The Vampire Diaries, and more likely would not exist without Rice's books, but until now, the author herself hasn't been directly involved with any of the more modern vampire films and TV shows.

With the new show, though, she'll not only get to be involved, but she'll be in a position of power where she has a say in what happens (Rice was reportedly not particularly happy with the movie adaptation of Interview, as she hated Tom Cruise's casting). Writers don't always get the chance to be so involved in the adaptations of their creations, and sadly, women don't often get the chance to write or executive produce TV shows. Female auteurs are far too rare, and I hope that a series created by a woman as talented and beloved as Rice can become the next Game of Thrones.