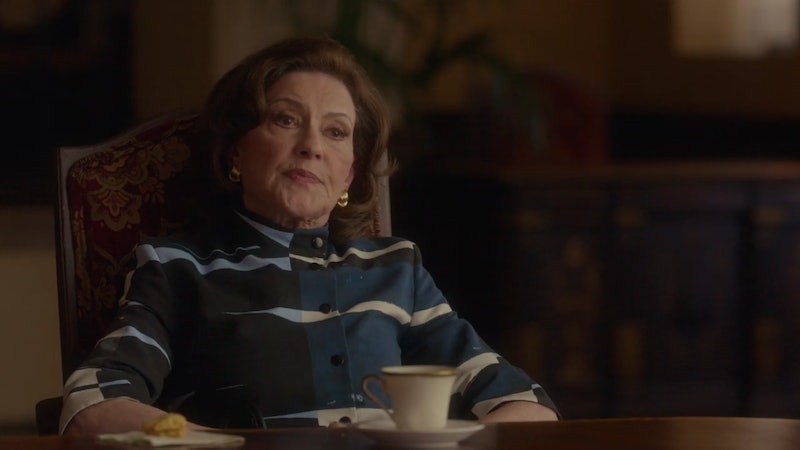 Major SPOILERS for Gilmore Girls: A Year in the Life are ahead. Throughout the original Gilmore Girls series, Emily Gilmore (played by Kelly Bishop) was always a very prim and proper woman — she expected everyone and everything to be in its proper place. But after husband Richard's untimely death, her world begins to shift in the Gilmore Girls revival. Fans get to see Emily wear jeans (really), get a TV tray so she can eat in the living room (yup), and totally give it to those uptight women from her Daughters of the American Revolution (DAR) group. Emily Gilmore's DAR scene in the Gilmore Girls revival will go down as one of the show's best scenes ever, showing a side of the character that fans have never seen before.

In the original series, Emily was a member of the DAR, as well as other organizations, and she even recruited Rory to do some work with the group when the younger Gilmore had temporarily dropped out of Yale. Fast-forward to Gilmore Girls: A Year in the Life: Richard passed away four months before, and Emily tries to pick of the pieces of her world, which doesn't seem to fit with the DAR women anymore. In the most poignant scene, Emily faces off with her former friends as they interview a potential member named Serena, who is Renford's blonde, young, cleavage-baring wife.

As the DAR women question young wife Serena, Emily grows more an more detached from the whole process. She rolls her eyes multiple times, and even gets up in the middle of the interview to noisily grab a cookie without regard for the crumbs she's leaving on the table (gasp). When one of the women closes the meeting with a hopeful tone, Emily yells "Bullsh*t!" Yep, you read that right — Emily Gilmore used profanity. You won't believe your ears, but she says it and she says two more times.

And that's when Emily unleashes the truth to unsuspecting Serena, in a scene that Bishop absolutely slays. You have to read Emily's words in order to believe them:

You're not getting in, honey. You were never going to get in. This was a courtesy meeting, because Renford is a big deal in our circle and he's got more money than God, despite the fact that he's already paying off three other wives ... Oh come on, it's always the same. The trophy wife — that's you, honey — comes in here with her big hair and her big t*ts, and she sits there. We all smile and say subtly snide things about her name and her family, which she usually doesn't get, right? ... And then we say, "It was lovely meeting you" and we send her off and we laugh and we have tea and we buy a rocking chair that may or may not have been Benjamin Franklin's barber's cousin's proctologist's. And we pat ourselves on the back for a job well-done and we go home and we forget all about her. It's all just a big pile of bullsh*t.

I'm going to let it all sink in for you: Emily also used that word for breasts and cursed again. Yup, this is real life.

Of course, the elder Gilmore is also willing to give Serena some advice, too, in another deliciously sassy speech.

Serena, you are wife No. 4. Sometimes, if a man is very old, that's a good position to be in, because he'll be too exhausted to find wife No. 5. And maybe you can wait him out. Like Barbara Sinatra. She just waited him out. But Renford is in perfect health and the minute he finds a new place with bottle service, you'll be right back at Tracy Anderson's, which you should've thought about before you signed that ridiculous prenup he gave you. Oh yes, we know all about that prenup. We all saw that prenup. We had tea and we passed it around and we laughed at it and we bought a very expensive precolonial douche and patted ourselves on the back for a job well-done. And then we threw out the last trophy wife's application. Pammy, I think her name was.

The DAR women send Serena out of the room so they can have it out with Emily, who once again calls the process her new favorite b-word. They essentially kick Emily out of the group without directly saying it, because they say that's just their style. And Emily's response is heartbreakingly candid. "This whole thing is dead to me, anyhow," Emily says. "It died with Richard."

She triumphantly walks out of the room, eating her cookie, and ready to pursue her new life in Nantucket. Emily Gilmore is definitely her own woman now — no DAR needed.