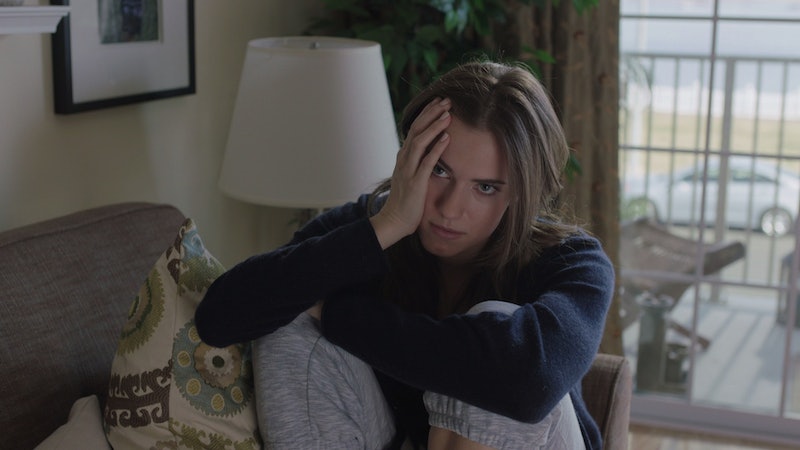 Ah, the holidays. The time for all crowding into the same house as your relatives, having brief and insanely intense fights about stuffing, and feeling on occasion as if you're going completely crazy. In this heightened political and social climate, this festive season is likely to be particularly worrisome and tense for many families. One aspect that may begin to scare you, though, is if your anger transmutes into aggressive thoughts. Even if you know there's not much risk of actually breaking a plate over somebody's head, the fact that you may imagine it in the heat of an argument may surprise and upset you. The good news is that manifestations of aggressive thoughts towards your family and feelings of hate and anger at your family can be dealt with — but they shouldn't be ignored, as they do point to something serious happening in your psyche.

There's a lot of diversity in theories about why humans become aggressive and experience aggressive thoughts and feelings; some believe it's inherent in our make-up (chimps and apes are aggressive), others that we learn it from our environment or that it develops when our needs and wants are frustrated. It does not, however, mean that you are "crazy."

Bustle talked to Dr. Karen Binder-Brynes, a leading psychologist, about what to do when you're experiencing aggressive feelings towards your family (and note that aggression can manifest in everything from shouting to slamming doors).

Understand That Anger Is Normal

Anger, Dr. Binder-Brynes points out, is not something to be afraid of. And it's actually a natural response to spending a lot of time in the company of close friends or family, who know how to push your buttons and are all up in your space. "Unless the levels of aggression one experiences become out of control and cause harm to oneself or others," she says, "it is important to understand that aggressive feelings are part of being human and can be particularly triggered by those we are closest to, such as family members." In other words, don't freak out and think you're crazy; it's normal.

Know When You're About To Blow

If you recognize patterns in your behavior with your parents, siblings, or relatives — if they know how to aggravate you, or if certain things just inevitably make you deeply angry — this is something to be aware of. Mind, the mental heath charity based in the UK, mentions in its guide to managing aggressive outbursts that maintaining a sense of your own body can be helpful, even if your mind is no longer distinctly able to respond to orders to calm down.

Signs that you may be aroused towards aggression or aggressive thoughts include adrenalin pumping, extreme bodily tension, and quick breathing. These are the signals that your body has gone into "fight or flight" mode, and that now is the time to remove yourself from the situation and use that energy in another way (Mind suggests punching a pillow, taking a long walk, or hitting ice cubes into the sink).

If you're in an aggressive space with your thoughts, you might be able to deescalate yourself slightly by practicing empathy. If a particular person is making you angry, the psychologist Tom Stevens recommends that you try to work consciously towards understanding where they're coming from (even if you ultimately can't forgive what they did or said), and attempt not to assume the worst about them. If your aunt has said something intensely homophobic, for instance, put yourself in her shoes, and bring yourself into a space where you can choose whether or not to have a civil conversation about it. (That doesn't mean your aunt is not being offensive, just that your aggression isn't necessarily the only way to deal with the situation.)

That said, Dr. Binder-Brynes notes that attempting to short-circuit or submerge your anger may not be a good idea, and is a mark of extensive cultural discomfort with anger. "Children," she says, "are taught early on how to quell their more angry and aggressive feelings by the grown-ups around them. For example, 'use your words' when you want something or are angry. Ironically, aggression and violence are continually modeled both in the media and the world at large." We're perpetually surrounded by anger and violence, but not taught how to communicate it properly. It's a bit of a nasty catch-22.

The American Psychological Association has a good suggestion for those times when a particular relative makes you so mad you fantasize about strangling them: avoid them. "Directly facing all problems," they note, "may not be the best solution. Sometimes, avoiding an interaction that is likely to lead to anger is best. For example, allow a spouse to deal with an unfair store clerk or a disruptive child. Learn that you can occasionally lean on others to work out problems."

They also point out, justifiably, that the anger caused by family and friends is in its own particular category because these aren't one-off interactions, but part of ongoing relationships in a wider context. Dr Binder-Brynes backs this up, suggesting "taking breaks from situations which activate anger" as a good survival technique. If you fear that you'll start feeling aggressive towards somebody at Christmas or Hannukah, try to limit your interaction with them as much as you can.

Stay Away From Alcohol

If you want to have fewer aggressive feelings about your relatives, keep yourself sober. The science linking an uptick in aggression in both thoughts and actions to alcohol consumption is extremely solid, and it's worth paying attention if you'd rather get through to the New Year without anything disturbing happening. A study in 2010 found that the link between alcohol and aggressive tendencies is so strong that people who drink don't even need to drink anything to become more aggressive in their thoughts and movements; they just need to be shown something that reminds them of alcohol. If you do drink, keep your consumption to an absolute minimum and be conscious of your strategy to avoid people who anger you.

Feel the aggressive thoughts mounting? Count to 10. This isn't just a rough suggestion; it's one proved through scientific experimentation. A small study in 1999 found that performing 10-second counts when feeling aggressive made aggressive thoughts and feelings much less likely to pop up. And a new study in 2016 found that a 10-second count is extremely valuable when you have time to consider that the consequences may be very bad for you.

There are limits, though; the 2016 study found that the 10-second count doesn't calm people down if there are no real adverse consequences to consider (i.e. if everything will be fine if you have an explosion). And they also recommended that you don't do anything distracting during those 10 seconds, because the key bit is that you're giving yourself time to reconsider, not do something else.

Note If There Are Patterns

Aggression and angry thoughts are often normal, Dr. Binder-Brynes points out. "As human beings we have a myriad of emotions including anger and aggression. These emotions are all part of a complex psychological system aimed at helping us survive and thrive within an interpersonal and relational framework of living."

However, if they occur frequently and you don't seem to be able to dismiss them, they may fit into the category of "intrusive thoughts," a key part of some anxiety disorders like obsessive-compulsive disorders. The Calm Clinic defines them as "thoughts that consistently enter your mind against your will. They're considered intrusive because you simply cannot get them out of your mind, and they often pop up at unusual moments." Note how often they turn up, whether you can get rid of them, and whether they seem to be prompted by anything or appear as if out of nowhere. The Intrusive Thoughts organization is a good place to find resources and information if you think this may be your situation.

Work With A Therapist

Aggressive thoughts are one of those things that, if they're persistently bothering you and can't seem to be resolved, should be targeted by a therapist. "Seeking professional help is always an option if one's feelings of aggression or anger feel out of hand," Dr. Binder-Brynes recommends. The Good Therapy Organization specifically suggests cognitive behavioral therapy, to learn how to identify and combat aggressive thinking, and psychodynamic thinking, in which the feelings suppressed or covered by violence and aggression are encouraged to be expressed. And yes, if you're constantly sublimating your aggressive feelings into passive aggressive behavior, you should also ask for help from a professional; it's difficult behavior that will benefit from a bit of aid. If you feel you are a danger to yourself or to others, call a mental health helpline.

"Especially around the holidays, when people are around the intimacy of their families, it is important to realize one may have anger and aggressive feelings," Dr. Binder-Brynes advises. "Finding ways to release these feelings in healthy ways such as exercise, venting to friends or seeking professional help is much more helpful than feeling guilt and shame at emotions that are merely just part of being human."

More like this
14 Easy Ways To Find Joy During The Holidays
By Carolyn Steber
25 Brilliant Holiday Gift Ideas For Coworkers Under $30
By Carolyn Steber
69 Great Gifts For Guys No Matter What Their Hobbies Are
By Teresa Newsome, Mia Mercado and Brittany Leitner
7 Joyful Alternatives To A Traditional Holiday Celebration
By Jessica Goodman
Get Even More From Bustle — Sign Up For The Newsletter