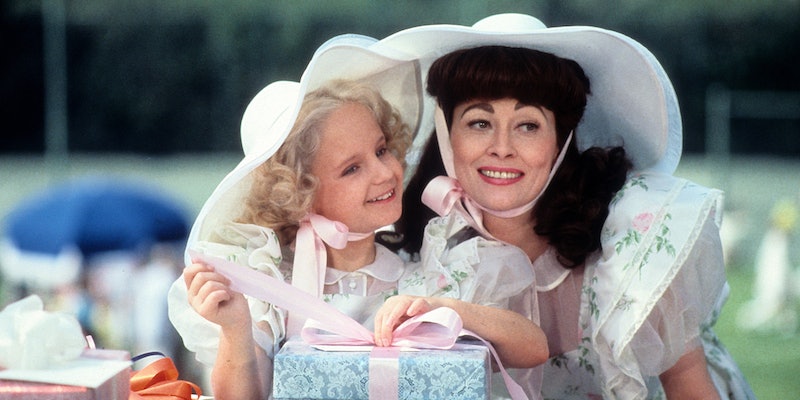 Narcissists are often viewed as an annoyance — petty, vain and a bit pathetic — rather than as serious potential instruments of emotional destruction. But narcissists who fit the full criteria for narcissistic personality disorder (or NPD, as it's called), are not benign actors — they can do real damage to the people around them. And that comes out particularly if they have children, who narcissists often see as accessories to their own ego rather than people of value in and of themselves.

An area that's attracted quite a lot of scholarly attention is the particular plight of daughters of narcissistic mothers, who have their own specific path to tread (Dr. Karyl McBride's famous book Will I Ever Be Good Enough?: Healing The Daughters Of Narcissistic Mothers is the classic on this subject). But if you recognize that you and your mother fit the mold, there's one big looming question: what do you do next? Is Christmas ruined? Is it possible to make her stop making you feel like you have no worth (except to make her look good)?

You may think your mother hits all the items on the narcissism inventory, but the odds that she's received a formal psychological diagnosis are slim. However, lack of a formal diagnosis doesn't mean that knowledge about how narcissism operates can't inform your interactions with her; it's still worth taking the Narcissistic Mother Survey over at Dr. McBride's site. It's important to note that if your mother only fits a few traits, rather than the majority of them, you shouldn't dismiss the entire idea out of hand; narcissistic aspects to a personality can be deeply harmful, and even just a few can still deeply impact your relationship with your mother and the way you were raised. The good news is that there are psychological strategies that can help us attempt to deal with the difficulties of narcissistic mothers; the bad news is that the methods can be difficult themselves (and your mother almost definitely isn't going to like them).

McBride is quick to point out that it is daughters who tend to face particular difficulties with narcissistic mothers, in part because their mother often see them as competition. "A narcissistic mother," she writes, "sees her daughter, more than her son, as a reflection and extension of herself rather than as a separate person with her own identity." Separating out your own identity from your mother's can be an immensely tricky thing as a woman, even without the added pressure of years of demands that you conform to behaviors that make your mother look good. It's a double bind, though: daughters of narcissistic mothers will recognize the feeling that they're meant to be perfect, but not quite so perfect that they overshadow their mom. Psychology Today pinpoints the source of this competition in your "youth and sexuality": in your mom's eyes, you are effectively your narcissistic mother 2.0, and she sees you as a direct threat.

This is not how we're conditioned to see mothers, particularly ones who "look good" from the outside. Alas, it's a key part of narcissistic maternal behavior. The next time your mother is thwarting or disparaging towards you, look at it like you would a competitor in some small contest in 4th grade who can't accept losing. It won't hurt less, but it might give you more of a handle on the situation.

Understand That She Is Unlikely To Change

The notion that your mother may, bit by bit, eventually learn how to become a better maternal figure might have been a sustaining hope for years, but it's important to know that this probably isn't likely. Dr. Craig Malkin explains in his writing for Psychology Today that people with full-fledged narcissistic personality disorder may be capable of change, but that doesn't mean it's going to happen: "It’s not that people with NPD can’t change; it’s that it often threatens their sense of personhood to try." Narcissistic people need to learn to empathize and feel vaguely insecure, and most are deeply uncomfortable with that feeling.

The psychotherapist Michelle Piper, who specializes in narcissistic mothers, points out on her website, narcissisticmother.com, that "ironically, though the people around the narcissistic mother can identify the source of their suffering, the narcissist does not believe she is the one who should change. Therefore, it is unlikely your mother sought treatment for narcissism." Narcissists, she says, are "highly resistant" to treatment. The way to cope, therefore, is not in trying to force your mother to make changes in ways that will end in failure; it's largely centered on you, and how you interact with her (or don't).

Trace How Her Behavior Has Influenced Yours

If you're going to fully confront your relationship with your narcissistic mother, you need to do the uncomfortable work of looking at just how badly it has affected you — and then work on defusing or combating those particular aspects, so that she has less power. The Huffington Post has a solid collection of six signs that you were raised by a narcissistic mother: you fear her disapproval, you experience chronic indecisiveness because of her constant control over you, you experience the need to have others fulfill your needs, you have difficulty expressing feelings, as well as a fear of tantrums and anger, and a lack of boundaries with your mother herself.

Collectively, this can be categorized as "co-narcissism," or the condition of adapting to life with a narcissistic person and developing weird emotional problems as a result. Dr. Alan Rappaport explains on his website that "co-narcissistic people, as a result of their attempts to get along with their narcissistic parents, work hard to please others, defer to other’ s opinions, worry about how others think and feel about them, are often depressed or anxious, find it hard to know their own views and experience, and take the blame for interpersonal problems."

So once you've realized the patterns, what can you do? First things first: get a very good therapist, one who accepts the idea that your mother is a narcissist and will help you through the results.

Secondly, reassess your boundaries with your mother. Normal parenting does not require the majority of the child's energy be devoted to soothing or attending to the parent; you are allowed to have your own life and needs, something a narcissistic mother will not understand. Narcissist's Child has an excellent and comprehensive guide to establishing boundaries with a narcissist mother, including the necessity of consequences every time she violates one.

Many children of narcissistic parents will have a constant feeling of flexibility in their sense of self and a constant, nagging "inner voice" — what psychologist Lisa Firestone calls "an inner critic... that reminds them they are not good enough or that they need to be the best or they are nothing. Because their parents only value their accomplishments as they reflect on them, the child never truly feels they are good enough." This inner voice can be deeply damaging and highly powerful, and it can take years of work to detach value from its proclamations of "nope, not good enough." Cognitive behavioral therapy can be a very useful tool in gradually lessening the power of this critical inner voice; the tricky bit is that even if you know it's not true, it can still be very loud in your head.

Distinguish Between Conditional And Unconditional Love

The Counselling Directory recommends that one of the main ways that daughters can heal from a narcissistic mother is to "[recognize] the internalized messages of conditional love and the effects in your life and relationships, both with others and yourself." Conditional love is the key aspect of narcissistic maternal relationships: they only dispense love when you do something worthy that makes them look or feel good, and at all other times you have no value and therefore deserve no affection. Unconditional love, on the other hand, continues even if you are not "performing" or doing anything to deserve it; it assumes constantly that you are deserving, purely by dint of being yourself. Yes, this exists. No, really. Find people who give it to you, and hold onto the sense of contrast.

Do Not Allow Other Narcissists To Come Along For The Ride

Kathy Caprino at Forbes makes the salient point that daughters raised by narcissistic mothers can often be conditioned to view the narcissistic condition of love as normal, and therefore are open to relationships (friendships, intimate relationships) with other narcissists. "They are so familiar with narcissism (because they dealt with it all their lives)," she writes, "that they unconsciously attract it into their lives, through their adult relationships, and in their work cultures and careers." If you've identified your mother as a narcissist, apply the same test to others. Do they bear the hallmarks? Is the way in which they deal with you unnervingly familiar? This is not normal and you should not accept it as such.

Consider Cutting Her Off

Sometimes establishing boundaries, working on yourself, going to therapy, understanding your past and finding unconditional love still isn't enough. Narcissistic mothers can have the power to make life utterly miserable (and to be totally unrepentant while doing so). And there is weighty evidence in favor of cutting them out of your life. Psychologist Dr. Pat Frankish, writing in The Guardian in 2012 about a woman who had cut off communication with her mother, commented that she "had her identity, her vitality and her energy sapped – and if she stays in touch with the person who is taking all that from her, she'll be unable to maintain a sense of herself. It's a question of whether you succumb or survive – and she has chosen survival."

It's excellent phrasing to emphasize just how horrific the experience can be, and how justified a complete cut-off can be. If this is the choice you're considering, you'll likely find Gabrielle Moss's guide to guilt at cutting off contact helpful. Otherwise, many experts recommend "low contact": strictly controlled interactions where you determine what is and isn't acceptable, and leave or hang up the second she crosses the line. If you choose this, don't feel guilty. You're not being a bad child; it's justified self-protection. Good luck.

More like this
What Is The Forest Personality Test? The TikTok Trend, Explained
By Georgina Lawton
The Best Time To Date After A Breakup, According To Experts
By Bustle Editors
The Top Mistakes Scorpios Make In Relationships (& How To Avoid Them)
By Nina Kahn
Are Leo & Capricorn A Good Match?
By Kristine Fellizar
Get Even More From Bustle — Sign Up For The Newsletter