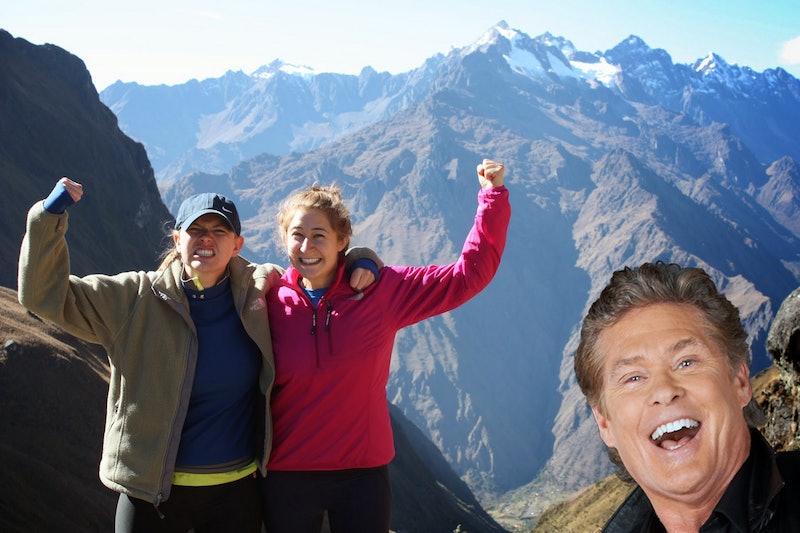 Happy April Fool's Day, everyone! If you're anything like us, your favorite part of April 1 in the digital age is finding out what wacky pranks the Internet has planned for the big day. We've rounded up 12 of our favorites (so far), from LinkedIn's new cat-based service to a surprise appearance from David Hasselhoff. Gotcha!

Love setting your favorite selfie as your custom Gmail theme, but wish there was a way you could inflict your narcissism on the rest of the world, too? Now you can, thanks to the Gmail Shelfie — that is, Shareable sELFIE! You can even set your theme to Gmail’s top trending Shelfies, which I dutifully did (in the name of research, of course). Now I’ve got some dude with spikey hair staring at me from the depths of my inbox. Not going to lie: It’s a little creepy.

3. LinkedIn’s Cats You May Know

LinkedIn has introduced what might just be the most important social media tool of all time: Cats You May Know, geared towards giving “pawed professionals an opportunity to brand themselves, share their unique skills, and network with both humans and other relevant cats in their breed.” After all, the Internet exists primarily for cats, does it not?

Described as a “tasteful, Memento-style puzzle that takes the viewer out of the fire and into the frying pan,” Netflix gifted us 20 glorious minutes of bacon cooking. Bonus: The “Looking for something else?” recommendations it gives you at the end all star — who else? — Kevin Bacon.

Man. Now I really want some bacon. Damn you, Netflix!

TOMS + Uber = completely sustainable car service. Or something. Given the heat Uber has been getting lately for scamming its users, I can’t think of a more ridiculous concept.

In a world where the ability to write in full sentences has gone by the wayside and spelling words correctly is frowned upon, clearly there is only one option left: Complete and total Emoji conversion. Luckily, Google is on top of the problem, with Google Translate support for Emoji now coming built directly in to Chrome for Android and iOS. Problem solved!

All of Google’s other top services are getting in on the fun, so why not Google+, too? Thanks to this magnificent new creation, you can now boast to all your friends about that hilarious time the Hoff photobombed you while you were hiking Machu Picchu or whatever. Win!

Finally, the Rosetta Stone software geeks everywhere have been waiting for is here! Includes language software that will take you from simple greetings to arguing about sports over a bottle of Bloodwine, live conversations with native speakers guaranteed to be from Beta Quadrant, and more.

What is this madness, Sex.com???

Man, Google really outdid themselves this year, didn’t they? Do you have what it takes to catch ‘em all and become the company’s new Pokemon Master?

I can’t think of a better upgrade than one that adds little tiny top hats to all of the icons on your dashboard.

Twitter: The Next Generation apparently will involve the Twitter Helmet, “a sophisticated, full immersive, staggeringly high-resolution wearable device that allows our users to interact with the world around them entirely via a custom aviary interface.” I don’t even know what all of that means, and alas, there’s no picture to illustrate it — but that aside, I imagine it looking something like this:

DON'T TOY WITH ME, NETFLIX.