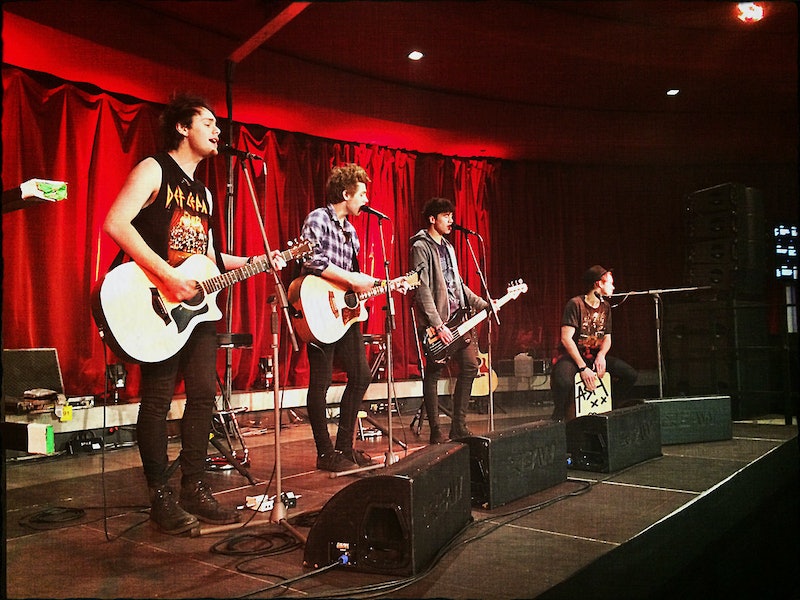 Their EP, She Looks So Perfect, is now available for download on iTunes and it's only 4 songs long, just enough to give you a feel for the band's sound without taking up too much of the time you could be spending listening to 1D instead. But for those who remain skeptical that 5sos can break out of the shadow of Harry Styles' hair, here's a song on the EP that you'll love if already you love these One Direction songs.

If You Like "What Makes You Beautiful", Try "She Looks So Perfect"

BEST LINE: "Your lipstick stain is a work of art. I got your name tattooed in an arrow heart."

If You Like "Does He Know?", Try "Heartache on the Big Screen"

On the surface, "Does He Know?" and "Heartache on the Big Screen" have two completely different messages. "Does He Know?" is about shamelessly lusting after someone else's girlfriend while "Heartache on the Big Screen" is one of the world's happiest breakup songs. However, they have a similar upbeat pop feel that screams get off the couch and dance.

BEST LINE: "The clock is ticking, and I'm out of time. The camera's rolling, and I forgot my lines."

If You Like "Half a Heart", Try "The Only Reason"

"Half a Heart" and "The Only Reason" differ in sound rather than message. They're both concerned with the heartache that a relationship gone wrong has left you with. The 1D song may take a more somber tone about their wistful desire for a reconciliation than 5sos's rock ballad, but they both send out meaningful messages to the one that got away.

BEST LINE: "Even though my dizzy head is numb, I swear my heart is never giving up."

5sos closes out their EP with a cover song from 1979, exactly like 1D's cover of "One Way or Another". Their song of choice was originally written by The Romantics and 5sos does the song justice, making a loyal cover that nonetheless adds in elements of their own aesthetic. Much like 1D, you can tell just from listening to it that the boys had a great time recording it.

More like this
Watch Kelly Clarkson Sing A Taylor Swift Breakup Song About A Toxic Relationship
By Alyssa Lapid
Will Beyoncé Perform At Or Attend The 2023 Grammys?
By Jake Viswanath
Taylor Swift May Miss The 2023 Grammys For Reasons Fans Know “All Too Well”
By Jake Viswanath
Taylor Lautner Thought Taylor Swift's 2009 VMAs Interruption Was A "Skit"
By Alyssa Lapid
Get Even More From Bustle — Sign Up For The Newsletter
From hair trends to relationship advice, our daily newsletter has everything you need to sound like a person who’s on TikTok, even if you aren’t.