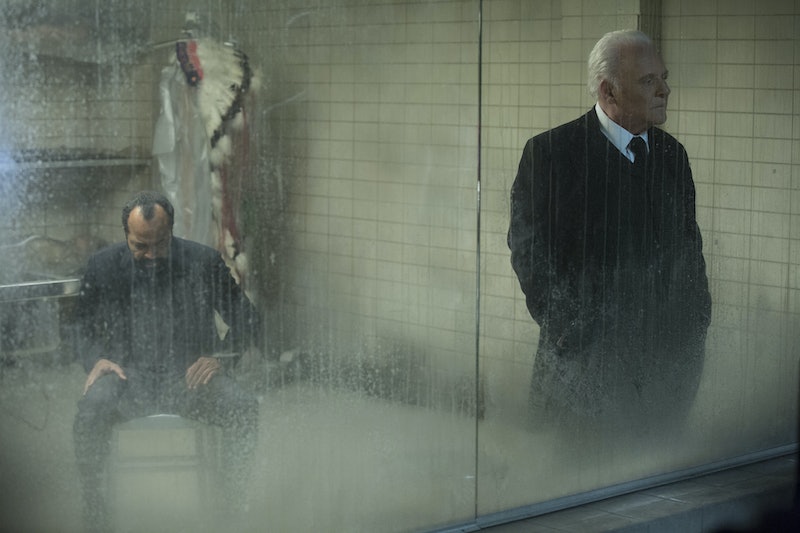 It seems that Westworld is finally ready to start providing answers to its many mysteries. But, much like the heads of the mythical Hydra, every time one question is answered, even more sprout up in its place. The Nov. 27 episode of Westworld gave more hints into the mysterious Arnold's intentions, but also provided an even bigger question about his legacy. Much like humans were supposedly made in God's image, it turns out that Bernard was made in Arnold's image. But if Bernard was made by Ford to replace his deceased friend, is this finally confirmation that Arnold is dead on Westworld or is there a chance that the park's creator is still alive?

Dolores certainly seems to think that Arnold is dead. In fact, she claims that she killed him personally. If Arnold is truly dead, though, who is the one sending the signal to hosts and working to make them more sentient? Is Ford finally getting around to trying to finish Arnold's work, or is Arnold himself in hiding and trying to work around Ford and Delos to accomplish his goals? In a series where nothing is as it seems and nothing can be taken for granted, it's impossible to say for sure whether or not Arnold is alive, but there are plenty of clues to dig into.

The key to this mystery all comes down to Dolores. Who better to confirm someone's death than their self-professed murderer? Dolores has been falling through her own memory for most of Season 1, experiencing moments from her past while on her quest to find the maze with William (which, also, may have been just a memory). The thing about memories, as it's revealed in a conversation to Maeve, is that hosts experience their memories fully. When human beings have memories, they're hazy — not entirely right. Hosts, however, access their memories like a computer accesses files, in crystal-clear copies. If Dolores believes that she killed Arnold, then she fully believes it and can remember exactly what happened at the moment of his death.

However, the downfall of hosts' memories is that they can be falsely implanted. Just look at poor Bernard, whose memories of a dead son and estranged wife were placed there by Ford. (It's implied, but not confirmed, that the events that shaped Bernard's fake life are similar to those that shaped Arnold's real life). It's entirely possible that Arnold implanted fake memories into Dolores' mind to keep himself hidden while he works on his "true" plan. Whatever exactly that plan is, it seems that Dolores will serve as the key, one way or another.

There's only one episode of Westworld left in Season 1, and it likely won't have time to address the many mysteries within the park. What is Arnold's plan? Are William and The Man in Black the same person? Is Bernard going to stay dead? What is the secret of the maze? Is hooking up with a bandit while the tent you are in burns down the most effective way to die, Maeve? Whether or not Arnold is truly alive seems almost irrelevant at this point, because even if his physical body is dead and buried, his thoughts and ideas are living on through Dolores and other hosts. The world may be done with Arnold, but Arnold is far from being done with the world.