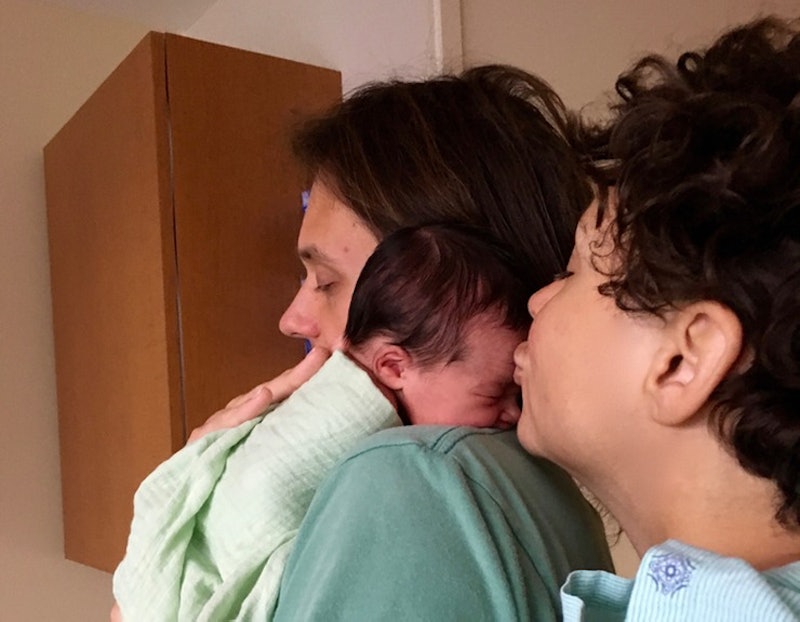 I gave birth to my daughter the night our country elected Donald Trump president. She was born at 5:05 p.m. Hawaiian Pacific Time, after which my body went into physical shock. A childbirth fever swiftly wrapped me in its tendrils, and my jaw locked under the terrible chattering of my teeth. But the doctor was on it. I was in a good hospital with good insurance, and so my baby and I were safe. Though I have never felt so defined by my femininity as on that day, I never felt disrespected or demeaned in any way throughout the birth. My pain mattered. My life mattered. My experience mattered.

Donald Trump and his myriad cruelties seemed a thousand miles away.

Throughout my pregnancy, I was a total news junkie. On November 8, I expected the excitement of a rollercoaster: plenty of thrills, but no actual fear. Just my husband and me watching the electoral map on our iPads as the swing states turned blue. Instead, as I lay tangled in sweaty sheets, we watched contractions flow across the TOCO monitor and listened obsessively to the baby’s heartbeat. If there was a world outside my body’s prison, I didn’t care much about it — my mind was too busy collapsing inward like a dying star.

My daughter was getting a female president for her birthday, and this historic moment was all but wrapped in a tidy pink bow.

Nineteen hours of painful labor passed. Time twisted and tunneled. The light was cool and ambiguous outside my window, the Ko’olau mountains a distant, hazy green, and I wondered vaguely if it was morning or evening. Then my husband asked nervously if it was all right if he drove to the elementary school to cast his vote before the polls closed. I was flat on my back and finally pulsing with epidural anesthesia. I didn’t want him to go, but, blissfully free of bone-crunching contractions for the first time in half a day, I was feeling charitable.

Sure, his vote was merely a ritual matter, living as we did in a state as blue as the Pacific Ocean — and everyone knew that Hillary Clinton would be elected, in any case. How could she not be, when the other guy was a villain of such Dickensian proportions? My daughter was getting a female president for her birthday, and this historic moment was all but wrapped in a tidy pink bow. I myself had voted by mail-in ballot the week before. Nine months pregnant, I wept over the mundane blue mailbox at the historic significance of my action.

I was eight centimeters dilated already, but I understood that my husband wanted to tell our daughter that he voted for the first female president over an aspiring despot, and thus had upheld truth, justice, and democracy for posterity, even if only in gesture.

My mother comforted me, soothed me. “He’ll be back soon.”

Forty minutes later, he was still gone, and I was ready to push. I wanted to call him on his cell, but a wise L&D nurse cautioned against it. What if he drove too fast? What if he crashed?

Birth is a life-or-death event, no matter how we dress it up in tubes and wires. Birth is intimate, unpredictable, and gruesome. But it is also political. My healthcare coverage brought me safely through my pregnancy, and my reproductive rights allowed me to choose this baby with this man. There had been another pregnancy, years ago, but the time wasn’t right, and so I chose to protect us both from disaster and terminated at five weeks gestation. I am so grateful that I was able to make that choice, because it led to the life I have now. It led to Clara. It wasn’t until I experienced a much-wanted pregnancy that I truly realized the depth of cruelty involved in forcing a woman to be pregnant against her will.

The fact that I knew (or thought I knew) that I was bringing my daughter into a world where she would have power over her own body, where she could expect to live a full and meaningful life as a girl and as a woman — that political optimism led to her birth, too. I’d always wanted a baby girl, but I dreaded the gendered miseries she was likely to face. I feared the day the world managed to convince her that she wasn’t pretty enough (“not a 10”), or thin enough (“fat pig”), or that all her worth resided in having a “very nice figure.”

Girls face silencing and ridicule every day, and I know I can’t protect my daughter from all the dangers of being female in our society. But during Clinton’s campaign, it seemed that politics were turning her way. At one point, I actually believed that Donald Trump had performed a service for feminism by providing indisputable proof of the kind of workplace sexism that men often tell me, in epic feats of gaslighting, just doesn’t exist.

“Well, now no one can deny it,” I told my husband, as we watched slimes of men snicker on the Access Hollywood bus. “They’ve caught it on tape.”

Pushing my baby out of her flesh-and-bone house, I pulled oxygen like a woman climbing Everest, and at last she emerged from her quiet, internal universe in a rush of blood and water. All the usual things happened next. We held her, we marveled over her, we cried. Time stopped. I shivered with fever, and my husband held us through the sudden unseasonable frost. You could spot the three of us only through the eye of a telescope, where we lingered together on an ice-cold moon.

By the time I thought to ask about the election, my doctor had packed up and gone home. The nurses were cleaning up. I was euphoric, and holding an impossibly small, sweet-smelling little girl too tightly in my arms.

Her face fell. “It’s going to be Trump.”

After she left, I glanced at my husband. He too looked blindsided.

As the days pass, both the birth and the election itself seem misty as dreams. I can’t believe my body made this little girl, and I can’t believe our country elected a man who would see her as a “piece of ass.” But the election was hard reality. I know now that the real dream was the safe, predictable, predominantly liberal world I once inhabited.

I’m shocked that white women overwhelmingly voted for a man who so often speaks with disdain for them. But I also know, having experienced the pains of birth, that women are capable of oceanic depths of suffering, and suffering itself can become habitual. When we say that talk of grabbing women “by the pussy” is just locker room talk, we are admitting we don’t mind a little pain as long as men are happy. When we elect a man who has been accused by more than a dozen women of sexual harassment, we are wearing our collective traumas like a badge that reads, "This is the way things are, and the way they always will be."

They say the worst time to give birth to a son is 18 years before a war. It seems to me now that the worst time to give birth to a daughter is on the eve of Trump’s Supreme Court. But though I’m frightened, it’s impossible to hold a healthy newborn and feel anything less than spellbinding hope. It breaks my heart to think that America hates women so much that it would elect Trump over the most qualified candidate we’ve seen ever seen. But my daughter’s heart is young and strong, and there’s a new fight brewing. I hope that the American people can renew their commitment to justice and equality; that the next four years bring about much-needed change; and that together we can create an American culture worthy of our daughters.