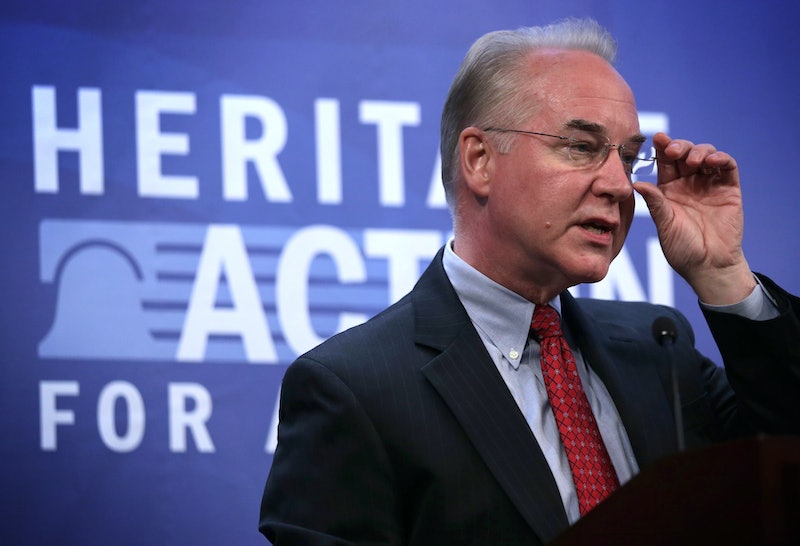 The New York Times reported Monday that Rep. Tom Price will be Health and Human Services Secretary in Donald Trump's administration. Trump's team reportedly offered the job to Price, a six-term representative from Georgia, on Monday, and an official announcement could come as soon as Tuesday, according to The Atlanta Journal Constitution. Price, who chairs the House Budget Committee, has been a staunch critic of Obamacare for the last seven years and has proposed alternative legislation in Congress; this suggests that Trump, at the very least, is legitimately considering an attempt to repeal the landmark health care legislation after taking office.

As far as Republican members of Congress go, Price is a garden-variety right-wing ideologue. He opposes marriage equality, explaining that "the tried and true traditions in history that made us great are preserved and have survived because they are effective." He's also implied that gay marriage would have negative economic effects. Price also opposes mandatory contraception coverage, and in 2012, incorrectly asserted that there is "not one" woman in the country who can't afford birth control (in reality, over one-third of American woman have struggled to afford prescription birth control, according to a 2014 study). Needless to say, the Georgia Congressman is staunchly anti-abortion.

On the eve of Obamacare's passage in 2010, Price made headlines for repeatedly interrupting a Democratic congresswoman as she tried to make arguments in favor of the bill. Price shouted "I object" as soon as California Rep. Lois Capps began speaking, and said it again when she attempted to continue. He was eventually deemed out of order by the presiding congressman.

Like much of the GOP, Price supports privatizing Medicare, and said shortly after the election that House Republicans will move forward with a privatization bill "within the first six to eight months" of Trump's administration. Given Trump's repeated pledges during the campaign not to touch entitlement spending, it's not at all clear that Trump will sign such a bill if and when it's passed.

By tapping price for HHS, Trump is reaffirming his opposition to Obamacare. What exactly this means is unclear: It's possible that he doesn't really plan to try and roll back Obamacare (this is my theory), and that he's doing this solely to stave off attacks from his right. But of course, the exact opposite could be true — Trump may have picked Price because they genuinely agree that the health care law should be repealed. We'll find out soon enough.