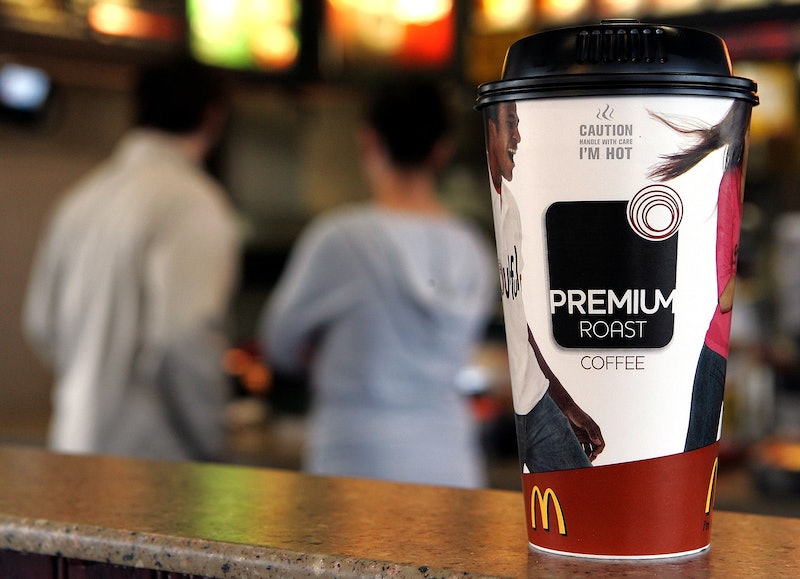 The Taco Bell breakfast menu has finally hit restaurants and, although we hear it's not fantastic, fast food rival McDonald's is feeling the heat. In a gesture of goodwill towards its current and potential customers, McDonald's is offering a free small coffee to breakfast-hours visitors from now through April 13.

Although this breakfast competition from Taco Bell won't singlehandedly take McDonald's down, it deals yet another blow to the fast food giant as of late. Previously, McDonald's enjoyed a surge in business during the recession, due to Americans' reduced discretionary spending and apparent trading down from fast casual and chain restaurants to an affordable and familiar standby, the Golden Arches. Its McCafe line has also performed well in recent years, as Americans demonstrated that their love for fancy coffee extends well beyond Starbuck's reach.

However, the death of the real Dollar Menu has hurt McDonald's — customers were pretty annoyed about this, and they have not fully warmed to the "Dollar Menu and More" yet. (In an offense to our intelligence, this revised non-Dollar Menu contains items conspicuously priced up to $5.) And sales figures indicate that McDonald's performance in February of this year was weak.

Although I have pored over gory Taco Bell breakfast photos as eagerly as the next person of the internet, frankly it's lost on me why anyone would choose a fast food breakfast other than the almighty McGriddles sandwich (bacon, egg, and cheese, please). Remember: It was the McGriddles that began delighting stoners and ordinary American gluttons alike over a decade prior to the emergence of the waffle taco. Taco Bell can throw as much sweet-and-savory shade as it wants: Everyone just knows that Taco Bell is for when you're still drunk, and McDonald's is for your hangover.