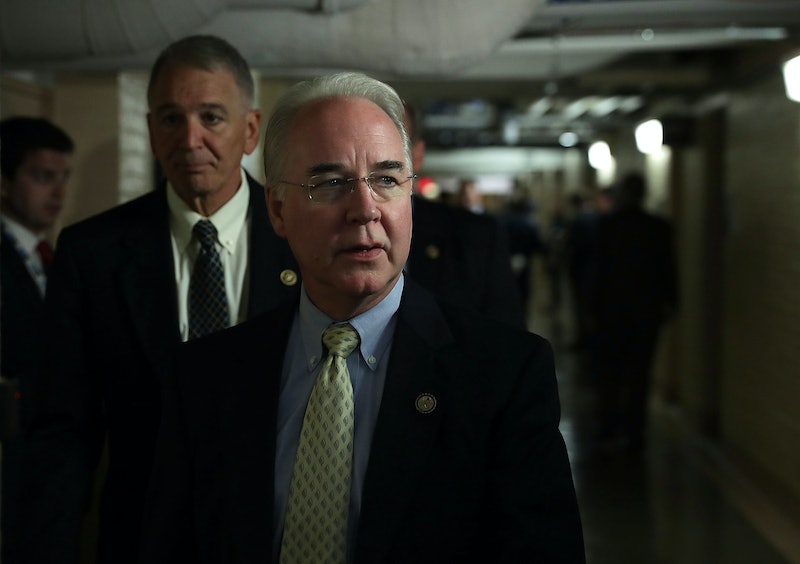 As President-elect Donald Trump solidifies his incoming cabinet, his most surprising picks aren't those that are strange choices, but rather, those who are closely aligned with the Republican establishment. Tom Price, a Georgia congressman, critic of President Barack Obama and Trump's pick for health secretary, falls into the latter category. As with many of the more establishment Republicans Trump is now surrounding himself with, Price is an ultra-conservative lawmaker whose stances on most social issues are quite unpalatable to anyone who cares about women's right. In fact, Price's track record on women is scary, and suggests that the incoming administration will be no friend to women's hard-fought rights.

One needs only glance at some of Price's "accolades" to glean the way he feels about women and reproductive rights: he's voted against abortion rights six times in 2016 alone. He's supported and co-sponsored a number of terrible anti-abortion bills during his time in Congress, including the "Health Care Conscience Rights Act" in 2015 and sponsored a controversial House spending reconciliation bill that attempted to repeal the Affordable Care Act while circumventing the members of the minority party. It seems as though Price could be equally as critical of women who get abortions as he is of President Obama.

Perhaps even more telling than Price's disgusting but not altogether unsurprising views on abortion was his vote against the reauthorization of the Violence Against Women Act. Although the bill passed handily in the House in 2013, Price was among a number of House Republicans who voted against it. Despite never giving any quotes on the subject, a number of Price's Republican colleagues in the House reportedly voted against it because they were dissatisfied with the protections the VAWA gives to LGBT people — an incredibly gross cherry on top of this discriminatory sundae.

Given Price's staunchly conservative views on most every social issue facing women of all orientations and races, it's safe to assume that his upcoming turn as health secretary will be a nightmare for women's rights. For all of Trump's campaign trail talk about draining the swamp, he sure has managed to get some heavyweight establishment Republicans on his team. This bodes very poorly not only for all women, but also for those who voted based on his promise to reduce the power of career politicians and lobbyists too. And when it comes to protecting women's rights during a Trump presidency, the fight cannot stop here.

More like this
Footballer Jake Daniels Shared His Thoughts On A World Cup Boycott
By Sam Ramsden
Iran Has Issued A Death Sentence Over Mahsa Amini Protests
By Catharina Cheung, Darshita Goyal and Maxine Harrison
Amanda Gorman Shared A Powerful Message On Meghan Markle’s Penultimate Podcast
By Darshita Goyal
Joe Lycett Just Took HIs David Beckham Qatar Protest To A Whole New Level
By Sophie McEvoy
Get Even More From Bustle — Sign Up For The Newsletter