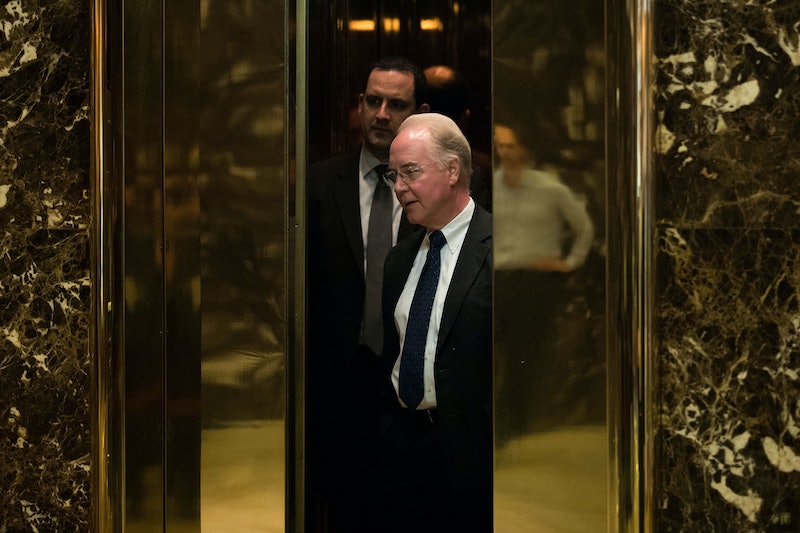 President-elect Donald Trump has made yet another controversial cabinet choice, this time for secretary of the Department of Health and Human Services. And if you're wondering how to make a stand against Trump's choice, there are quite a few ways to protest Tom Price's appointment, including calling your representative.

As health secretary, Price would be in charge of HHS, which happens to be the biggest funder of medical research in the world. He would also oversee social programs like Medicare and Medicaid and health agencies including the Food and Drug Administration and the Centers for Disease Control and Prevention. This is a lot of power in the hands of a man who opposes both women's and LGBT rights.

To protest Price's appointment, you can call your members of Congress and voice your opposition to Trump's choice of health secretary. Trump will need the Senate to approve his cabinet picks, and if enough Senators listen to their concerned constituents, Price doesn't have to become health secretary. Protesting Price's appointment isn't a foolproof method, seeing as he's a conservative darling, but if enough people recruit their Facebook friends to leave their representatives messages as well, the pressure on politicians could be enough to keep Price out of Trump's cabinet.

You can call your state senators, figure out who your representative is, leave them a message, and even contact House Speaker Paul Ryan's office. After listing your name, representative, and address, you can include your own specific reasons for opposing Price in your message.

If you're interested in protecting women's rights, LGBT rights, reproductive rights, and/or the Affordable Care Act (Obamacare), then you might find that protesting Price is a worthwhile endeavor. Price, a Republican congressman from Georgia, has frequently voted against women's and LGBT rights. When the Supreme Court ruled same-sex marriage was constitutional, Price called it "not only a sad day for marriage, but a further judicial destruction of our entire system of checks and balances," the New York Times reported. Price received a rating of zero on the Human Rights Campaign's Congressional Scorecard regarding his voting record on LGBT issues.

The conservative representative has also voted against Obamacare more than 50 times. In 2016, Price received a zero rating from Planned Parenthood, which makes sense given his anti-reproductive rights voting record and his opposition to funding the nonprofit. Price is particularly against abortion, and he received a 100 percent rating from anti-abortion group National Right to Life.

How Trump will react to backlash against his cabinet choices is hard to tell, but by calling your representatives, you may be able to make an impact on whether the Senate approves of Trump's cabinet picks.