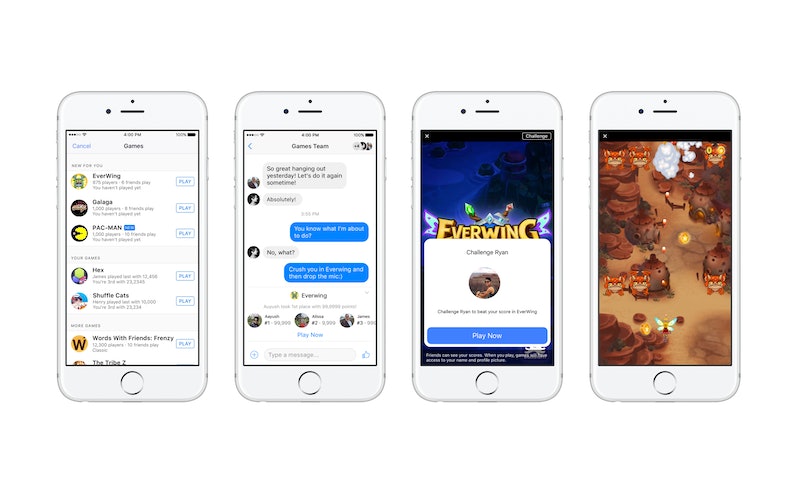 Need a good reason to update your Facebook Messenger app? As of Tuesday, Nov. 29, users can simultaneously chat with friends while challenging them to a host mobile games in an awesome new feature. So if you are wondering how to play games on Facebook Messenger and one-up your friends with some sweet Pac-Man moves, I’ve got you covered.

The new feature, called Games on Messenger, is offering 17 different games to 30 countries on both Android and iOS devices for its launch — meaning you can now play popular games such as Space Invaders, Words With Friends: Frenzy, and Galaga instantly with friends from around the world. There never needs to be another dull moment or awkward silence while waiting for someone to reply to a thread ever again! Just set a new high score on Bust-A-Move Blitz and they’ll be forced to answer your competitive siren call.

Users can access and play all 17 games from within either one-on-one or group message threads. There is no need to download or open another app, and certainly no need to upgrade your phone storage. The games load in mere seconds and are fairly simple and easy to play (in other words: highly addictive). The colorful graphics and nostalgic gameplay, combined with the social aspect of setting high scores makes a winning combination. As per social gaming norms, Facebook automatically shares your score with your opponent after you finish each round. Facebook has also announced that the games will be frequently updated, with new titles and ways to play added on a consistent basis.

To try out the new feature all you need is a wifi hookup and the latest version of Messenger on both you and your friend's phones. Check out these simple instructions to get up to speed on all that Facebook Messenger has to offer:

To start the fun, first you have to make sure your Messenger app is up to date. To check if you are using the latest version, go to your phone's app store (iTunes for iOS devices and Google Play for Android ones) and hit "update."

2. Start A Conversation And Click On The Game Controller Icon

Once you open the latest version of the app, tap the pencil and paper icon in the upper right hand corner of the screen. Enter the names of the Facebook friends you would like to invite to chat, and start messaging. When you are ready to challenge your friend to a game, tap on the game controller icon bellow your message box.

In their opening selection Facebook offers titles ranging from classic arcade games such as Pac-Man and Arkanoid, to Scrabble-type word games such as Wordsalot and Words With Friends: Frenzy, as well as Candy Crush-style puzzle games. Don't stress over which to play first, as you can probably squeeze a trial run of all 17 options easily into a lunch break (with a round of each taking about 30 seconds).

Once the game loads in a few seconds, play through a round and see just how high you can score. Once you are finished, your points total will automatically be saved to the Leaderboard for all on the chat to see.

What a fun and easy way to show all your friends just how awesome you are! But be warned: If they unseat you, you'll have to work to get that metaphorical crown back. What's a little healthy competition between friends, right?