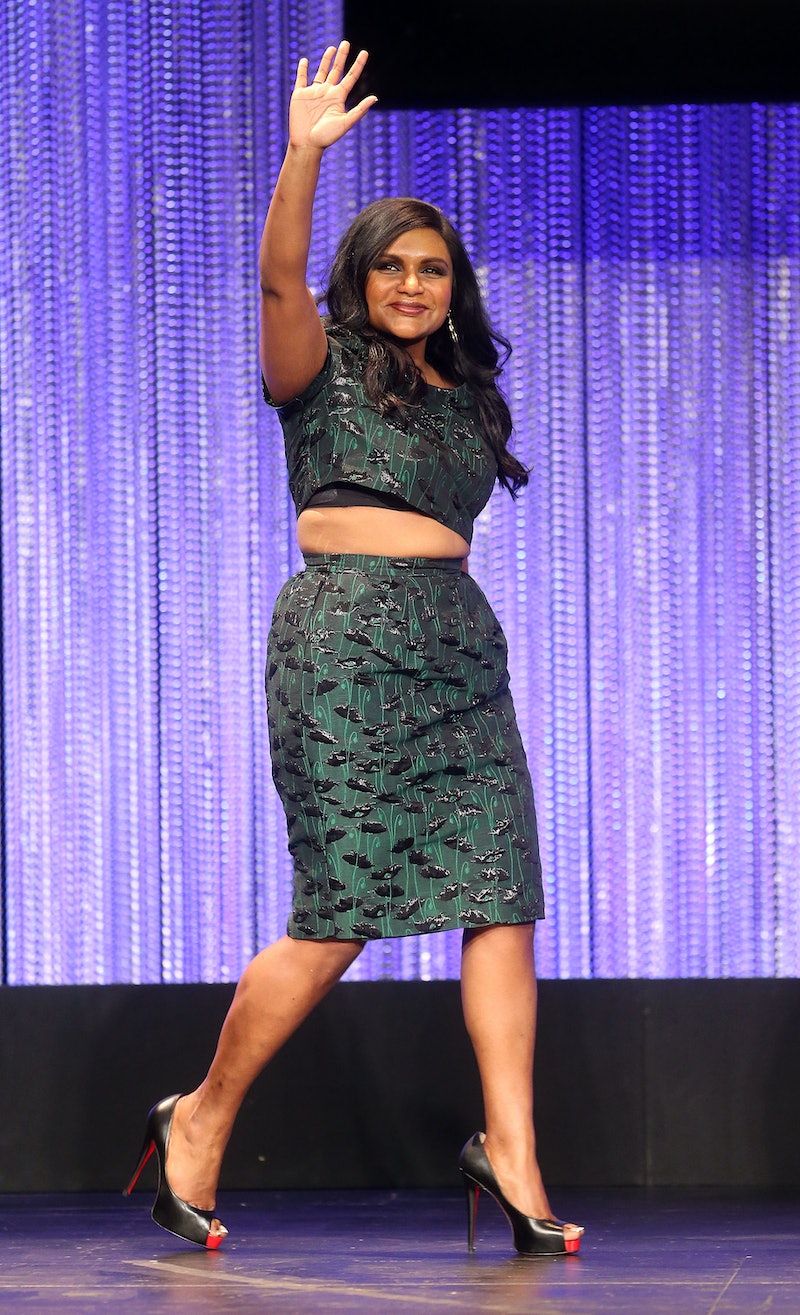 We put The Mindy Project creator and star Mindy Kaling in a very weird place as a creative person. A place we don't put a lot of other people in her position — other than, say, Lena Dunham. We expect her to operate on a different plane in terms of diversifying her show because she herself is a brown lady, and we expect her to rep all not-skinny people like that's her full-time job instead of managing her show and the staff of 100+ people who work for her.

This makes things generally very complicated, because as a culture of course representation is important and a responsibility that everybody (not just the people of color and/or not-skinniness) should have — but it also means a lot of people are holding Mindy Kaling up as a hero for simply managing to exist and be visible in a place where she is not the physical norm. And Kaling seems a little baffled by it all.

Kaling went on Jimmy Kimmel Monday night and talked about the reactions to her Vogue spread and the midrif-barign outfit she wore to the Mindy Project Paleyfest panel.

She expanded on this earlier in the interview:

I live in this world where — because I'm not skinny but I'm an actor, which virtually never happens in the world of actresses...I'm the recipient of a lot of backhanded compliments about it, where people are like 'It's so nice that Mindy Kaling doesn't feel she needs to subscribe to the ideals of beauty that other people do.' And I'm like, 'I do subscribe!' They're like 'It's so refreshing that Mindy feels so comfortable to like let herself go and be a fat sea monster.'

Her honesty is refreshing ("It's hard when you're a narcissistic, vain person who wants to be a role model"), and a good reminder: Sometimes, as she says, "it takes a lot of effort to look like a normal/chubby woman." And in no way does that make a person a fat sea monster who we all need to bow down to for her willingness to be seen. Especially when we could just bow down to what she's saying, instead.

More like this
Sandra Bullock, Girlboss Extraordinaire
By Matt Harkins & Viviana Olen
Here's How To Practice Self-Love In Small Ways Every Day
By Mackenzie Sylvester
Selma Blair Wrote Through The Pain
By Samantha Leach
Who Is Winona Ryder Dating? She Brought Him To The 'Strangers Things 4' Premiere
By S. Atkinson
Get Even More From Bustle — Sign Up For The Newsletter