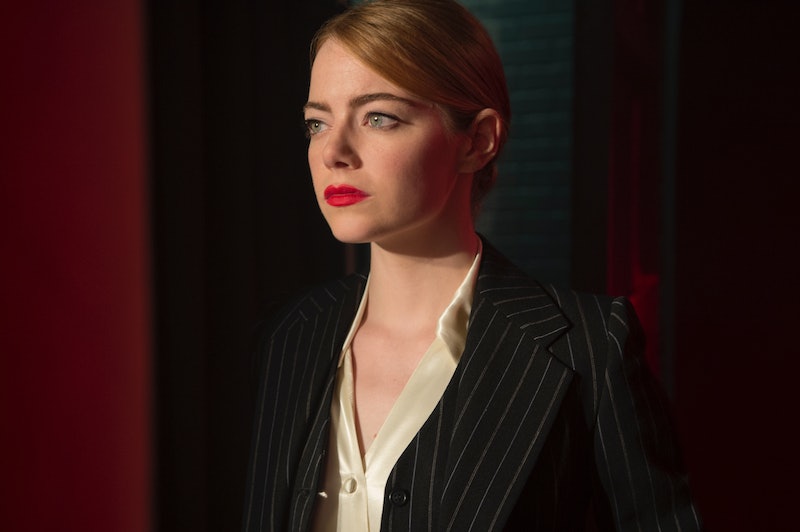 The end of the year is closing in fast, which means that 2017 Academy Award predictions have started rolling in. One of the most talked about performers for this nomination cycle is Emma Stone, who co-stars, with Ryan Gosling, in the much-lauded musical drama La La Land. Many critics are saying she's a shoe in, so if she lands the nomination, will Emma Stone win an Oscar for La La Land ?

The odds look pretty good. The website Gold Derby, which tracks the Oscars as if it was a horse race or other gambling activity (odds and all) has Stone leading the pack of their predicted nominees for who will take home the golden statue. Natalie Portman is second most likely according to their predictions, which are derived from the collected predictions of major media outlets. And indeed, Stone seems to be showing up frequently in publications' lists of predictions for the Oscars.

The other likely nominees for Best Actress all have their pros and cons. Natalie Portman, of course, is beloved by the Academy and a turn as Jackie O in Jackie is just right for the Oscars. Amy Adams for Arrival seems like a shoe-in, and she's a five-time nominee who has never won, so this could be her year. Ruth Negga is a cinema newcomer, but her turn in historical drama Loving has been getting enormous praise and the film is an important one for our current socio-political climate. Finally, Annette Bening's character work in 20th Century Women is likely to stand out as well.

But Stone's role in La La Land sure has a lot of Academy-friendly qualities going for it. The star has the type of acting history that could very naturally lead into a 2016 Best Actress win. Her first few starring roles were high-grossing and critically well-received comedies, and then she transitioned into a major blockbuster franchise (The Amazing Spider-Man) while taking on more roles in ensemble dramas and warm but serious "critical darling" films, like The Help and Birdman. In 2015 she got her first Oscar nomination, Supporting Actress, for Birdman, and then she had a year off the awards circuit before returning with La La Land. Stone has a good number of credits and a lot of goodwill, but is still fresh enough that an Oscar win would feel new and exciting for both her and audiences.

And Stone also has the benefit of a great role in a film that seems like catnip for awards. For one thing, she's not just acting in the movie — her role in the musical movie also has her singing and dancing, which makes her an impressive triple threat, especially considering she really does have an incredible singing voice and some solid dancing skills, too. And La La Land is a pretty good recipe for an Oscars sweep. It's whimsical yet ambitious, dramatic yet starry-eyed. It honors the magic of old Hollywood but adapts it to modern times and shows that it can thrive. It's also helmed by director Damien Chazelle, whose 2014 film Whiplash was nominated for five Oscars and won three.

Things that might complicate Stone's chance at her first Oscar win? La La Land is grand and ambitious to be sure, but it is somewhat of a lighter romance, which the Academy may look at less favorably compared to the heavier dramas of the year. Similarly, the Academy loves true stories and historical dramas — playing a historical figure always seems to net contenders a lot of goodwill — and La La Land is both a fictional story and set in the present day. Finally, if La La Land is destined to rack up the Oscar wins come February, the highly competitive Best Actress category may be a place where the Academy might choose to shine a light on another film.

Still, the numbers are looking good for Stone, and if the film's Oscar campaign continues to garner as much attention as it already has, 2016 could easily become the year Stone wins her first Oscar.