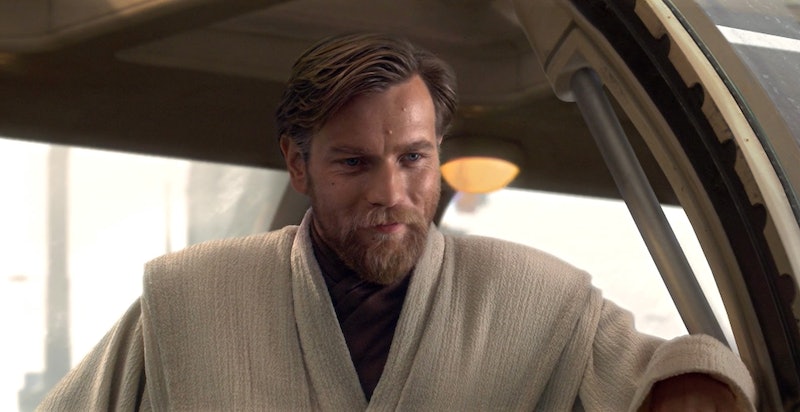 Ever since there was news that Disney and LucasFilms would be pumping out more Star Wars, the people of the internet were hype on the idea of an Obi-Wan Kenobi standalone film — but there hasn't been any confirmation of one in the works. Ewan McGregor's performance as Kenobi in the prequels-which-must-not-be-named is pretty much the only good thing about the series (no offense to the homie, Natalie Portman), so it's not a surprise that fans want more Obi-Wan action. Besides, according to Den of Geek, McGregor said he'd "always thought there was a story to tell between my last one and Alec Guinness’ (the actor who originally played Obi-Wan) first one" and it's most definitely a story he would be willing to tell. So, how could Obi-Wan fit into the current Star Wars trilogy?

Well, so far, all fans have is a story about a new girl with the Force in The Force Awakens. And soon, they'll get a tale about a bunch of rebels getting plans for the death star in Rogue One — and all this with no mention of Mr. Kenobi. Unless you count the Obi-Wan voice in Rey's ear when she finds Luke's lightsaber in The Force Awakens, "Rey? These are your first steps." Which I do.

But if there's all these new movies — not just the new saga of Episode VII to Episode IX, but also the standalone "Anthology Series" with films like Rogue One, as well as the standalone Han Solo and Boba Fett movies — why hasn't Ol' Ben get his moment in the sun? Where's his standalone? According to Geek Tyrant, there's an interesting rumor as to why there's no Obi-Wan spin-off. The rumor stems from an interview with Entertainment Weekly's Anthony Breznican on the podcast, Rebel Force Radio. He claimed,

"I have heard rumors that the one reason they haven't moved sooner on Obi-Wan is that they're not done with Obi-Wan quite yet in the Saga films. So I wouldn't be surprised to see an Obi-Wan [solo film] happen beyond Episode IX."

So, the idea that's suggested is LucasFilms may have some Kenobi stuff planned in the next two Saga movies, which will be released in 2017 and 2019, respectively.

But what role could Obi-Wan play? Perhaps Kenobi is Rey's grandfather and fans will get the backstory for that hypothetical relationship. Or maybe they'll go to flashback town and delve specifically into Old Ben's time in exile, while he was gently watching over young Luke Skywalker. Meanwhile, Kenobi partook in years and years of pivotal Jedi battles, so his experiences there would make excellent franchise movie fodder in some way, shape, or form.

Besides potential appearances in the next few Saga films, Den of Geek reported that McGregor is hopeful "that they’re going to explore different genres under the Star Wars banner. And one of those could be an Obi-Wan Kenobi feature film. Or two! The Obi-Wan Kenobi Story Part 1 and Part 2.” That's one option — maybe Kenobi will appear as a ghost in later episodes in the latest addition to the Saga, and then proceed into his own standalone for the anthology. What kind of genre would his story even be? I'm banking on a hero's quest sort of deal.

It's still unclear if we'll get to see any more Obi-Wan, but all these internet theorizers must have some sort of right idea. I guess we'll have to wait until the powers that be (not The Force, I mean the Disney and LucasFilms executives) deign to share their plans. It's going to be a long few years, y'all.