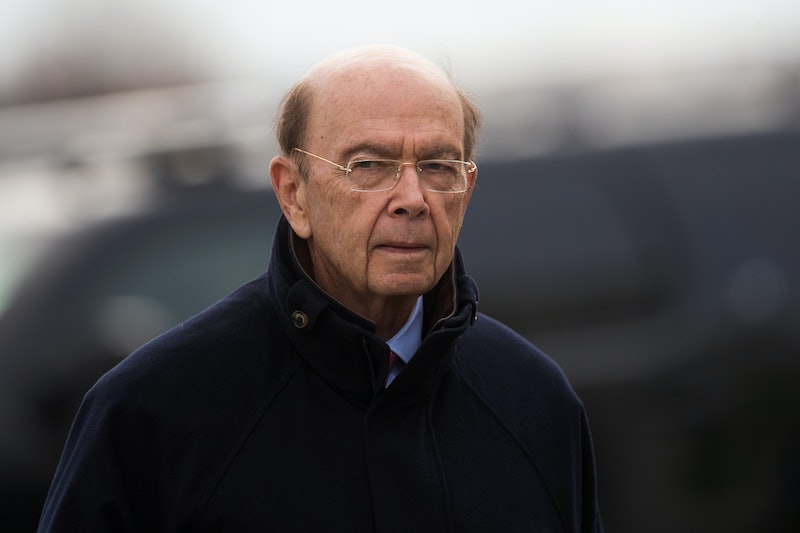 According to several media outlets, billionaire Wilbur Ross will be Donald Trump's commerce secretary. A Trump transition team official reportedly told NBC News that Ross, the founder and head of WL Ross & Co, will likely be officially announced on Wednesday. And Ross is not a new face to Trump's team. CNBC reported that he's been advising him recently, but he also was around for Trump in the early 1990s, when Trump was going through some financial issues with his Atlantic City casinos.

The 79-year-old investor reportedly has a net worth of $2.9 billion, which he gained through working for a couple decades at Rothschild Inc., a financial advisory group where he oversaw the bankruptcy advisory division, before opening his own firm. His bankruptcy background means he's well-versed in buying troubled or failing businesses, reworking them, and selling them off — a practice The New York Times called "tricky."

While he may bring business experience to the White House, Ross has no official government experience. But that doesn't make him an outsider. Although Trump promised to bring in outsiders to "drain the swamp" of Washington, Ross is very much an insider, having served on the U.S.-Russia Investment Fund board under President Bill Clinton and as an advisor to former NYC Mayor Rudy Giuliani.

If you want to know how insider-y Ross is, according to a New York Daily Intelligencer article, Ross was once the leader of a secret Wall Street fraternity called Kappa Beta Phi. Members, according to the article, include Wall Street elites like former NYC Mayor Michael Bloomberg, a former Goldman Sachs chairman, the CEO of AIG, hedge fund billionaires, the list goes on. Kevin Roose, who wrote the article, said that he snuck into a Kappa Beta Phi event and saw a "group of wealthy and powerful financiers making homophobic jokes, making light of the financial crisis, and bragging about their business conquests at Main Street’s expense." When he was found out, Roose claimed, Ross was reportedly one of the people who tried to convince Roose not to publish the story. Ross' membership in the group has been reported before, but Bustle has reached out to him for comment regarding the allegations.

According to The New York Times, Ross is fairly in line with Trump when it comes to commerce. He is reportedly in favor of big tax cuts for corporations, is against Obama's Affordable Care Act, will consider certain anti-trade opinions that Trump holds, may put high tariffs on goods from China, and wants to reduce taxes and regulations on energy companies.

Trump's spokesman Jason Miller had not yet confirmed the nomination on Tuesday, but did say, "Though President-elect Trump has not yet announced his pick for this position, it goes without saying that Mr. Ross has been a fantastic advocate for the president-elect’s plan to bring back jobs, eliminate the trade deficit, and make good deals for America’s workers."