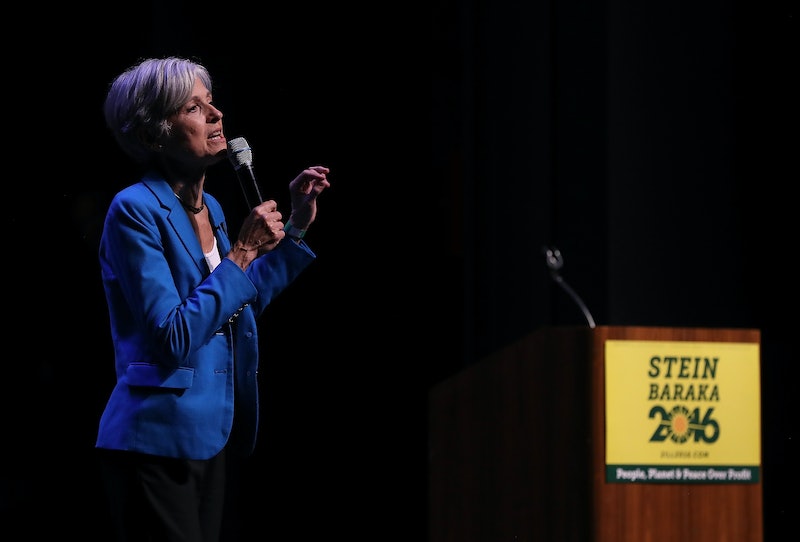 The recount effort being led by Green Party presidential candidate Jill Stein upped its fundraising goal to $9.5 million, according to her website, the latest increase since her campaign to examine the results in key swing states began. Originally aiming to raise $2.5 million when it began just before Thanksgiving, the goal was quickly met and surpassed. Stein’s campaign has been increasing the goal since, first to $4.5 million, then to $7.5 million to keep pace with the donations. At the moment campaign has raised more than $6.6 million, according to her website.

Skepticism about Stein’s motives have run rampant since her fundraising effort started, from the increases in fundraising goals to the fact that there’s no guarantee that the recounts will take place (Wisconsin has green-lit their recount, though Stein has sued to force a hand ballot recount). As Slate's Daniel Politi noted, "Yet even as some Hillary Clinton supporters are opening up their wallets to help the recount efforts, others have been highly critical saying the whole thing is nothing more than a gimmick to promote Stein and the Green Party." Also, it is not wholly clear what would happen to any surplus funds, which Stein pledges, somewhat vaguely,will go towards “election integrity efforts and to promote voting system reform.” Time's money reported "Stein says any excess money she raises for the recount effort will then be donated to a charity or a political party."

But perhaps the most oft-cited fact is that in just a few days, Stein has raised more money for the recount than she raised for her entire presidential campaign — nearly twice as much. Some observers see this as an opportunistic move on Stein’s part. Bob Biersack, who is a senior fellow at the Center for Responsive Politics, told the Associated Press, “The money can’t be used for her personal benefit, but beyond that there’s some flexibility.” However, considering Federal Election Commission restrictions on the money raised, this seems more like an opportunity for some good PR for the Green Party candidate.

Many have accused Stein, as well as Libertarian candidate Gary Johnson, of acting as a spoiler in the 2016 race: indeed, in Wisconsin and Michigan, her raw vote numbers are greater than the difference separating Republican Donald Trump and Democrat Hillary Clinton. 2000 Green Party candidate Ralph Nader is widely credited with pulling support from Democrat Al Gore, throwing the vote in Florida to Republican George W. Bush, handing him the election.

Whether Stein throwing her support behind Clinton would have affected the outcome of the election is unclear. But in this moment, with the Clinton camp taking a Swiss position on the issue of recounts, Stein offers the only electoral cause for those on the left to rally around.

More importantly, Democrats have been slow to pick up the cause of electoral reform. For some reason, Gore is making headlines coming out for a national popular vote 16 years after his own popular vote victory-Electoral College loss. If Stein is able to fashion her party into the party of electoral change, it might give voters more of a reason to support her. So far, it seems to be working.