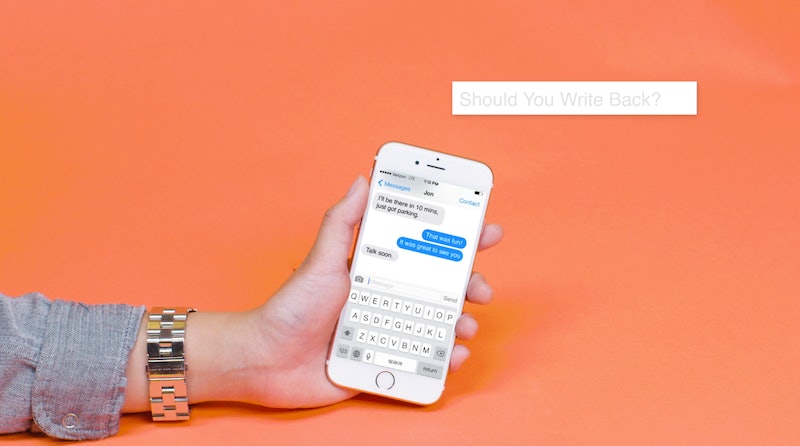 If you’ve been dating for any length of time you’ve probably met someone who was playing hard to get with you, or maybe you've even been the ~mysterious~ one yourself. The game may involve waiting hours (or days) to someone text back or being "busy" when they ask to hang out. Essentially, you're not making yourself available — whether that's by acting uninterested or going to lengths to get someone to chase you. But this cat-and-mouse game isn't exactly a new one:

“Now in the era of dating, which starts for middle class people in about 1915, we first see college educated women and middle class women going out and picking men on their own,” Historian Moira Weigel tells Bustle. “In the wake of that shift, are new kinds of advice for young women in particular saying they have to not seem too easily available. Young men won’t be interested in them if they don’t feel like there are all these hurdles to cross to have time with them.”

In the sixth episode of season two of Love, Factually — Bustle’s video series about love, dating, and relationships — Bustle talks to Clinical Assistant Professor, Department of Child and Adolescent Psychiatry at NYU Langone Medical Center Francesco Ferrari and Historian, Writer and Yale PhD candidate Moira Weigel about why we play hard to get, why it can work, and why it might not be worth it.

Check out the video below and see what it means if to play hard to get.

1. Dating Is All About Supply and Demand

“There starts to be this acute sense that if you’re available all the time when someone asks you out, your time doesn’t seem especially valuable,” says Weigel. By playing hard to get, you’re making it seem like demand for you and your time is high.

“Lack of alternatives, or lack of options definitely plays a role. So, in a population where there is a smaller supply of people, a small supply of options there’s a greater chance you’ll find a connection with those options,” Clinical Assistant Professor, Department of Child and Adolescent Psychiatry at NYU Langone Medical Center Francesco Ferrari tells Bustle.

3. The Paradox Of Choice

"There’s the principle called the paradox of choice. It basically says when supply seems endless, then your chances of doubting what you really want are higher. And I think with a smaller population with less choice, on average people tend to be happier,” says Ferrari.

4. Just Because You Can Play Hard To Get, Doesn’t Mean You Should

“You run the risk of not being genuine or authentic with yourself. It’s a defensive strategy — you’re not letting yourself be vulnerable and in order to have or develop intimacy in a close, loving relationship, vulnerability is a necessary condition,” says Ferrari. “Any time you’re putting a defense up or a wall up, or you’re not allowing yourself to be vulnerable I think that you’re essentially blocking yourself from developing a true intimate relationship.”