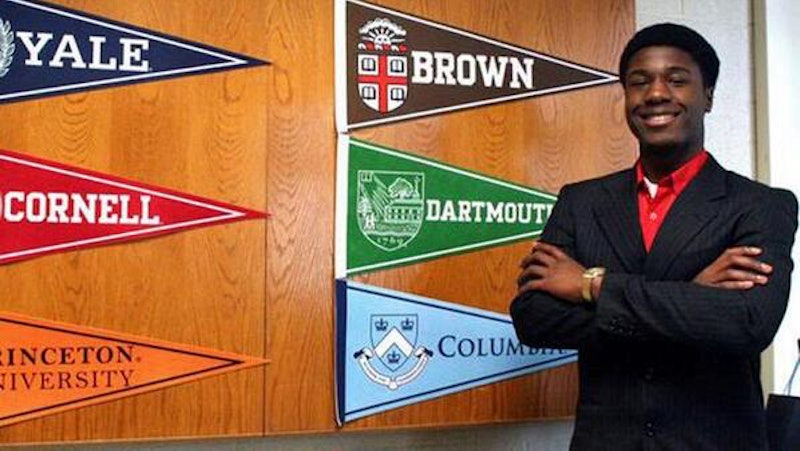 Kwasi Enin has a tough dilemma — choosing which of the eight Ivy League universities to attend this fall, since he was accepted to all of them. Yes, all of them: Brown, Columbia, Cornell, Dartmouth, Harvard, Princeton, Yale, and the University of Pennsylvania. Decisions, decisions. That Enin got into all eight Ivy Leagues is extraordinary, considering the schools only admit a small percentage of those who apply, ranging from around 6 percent to 15 percent.

The 17-year-old from Shirley, NY, who would like to be a physician one day, says he chose to apply to all eight schools because they each have something different to offer. Plus, his grades (he took several AP courses and placed high on the exams,) activities (he's a violist, a shot putter, and can belt out tunes with his baritone voice,) and a 2,250 SAT score likely put him on the shortlist for admission even before applying.

Enin told Newsday that he thought "maybe two or three" of the Ivy League Schools would admit him, never expecting to be accepted to all. "I've never heard of someone getting all eight," he said.

Nancy Winkler, Enin's guidance counselor at William Floyd High School, says it's a huge deal when a student even applies to one Ivy League school, let alone all of eight. "To get into one or two is huge," Winkler told USA Today. "It was extraordinary."

So what makes Enin stand out from the crowd? Katherine Cohen, a college admissions expert, told USA Today that college admission pools are heavily skewed toward girls and struggle to keep the female-to-male ratio even, which gives students like Enin an advantage.

What makes this news all the more better is what those closest to Enin have to say about him.

"We are very proud of him," Enin's father, Ebenezer, told Newsday. "He's an amazing kid. He's very humble. He's been trained to be a high achiever right from when he was a kid. We have been encouraging him to be an all-around student. So far, he has proven himself."

Enin's principal, Barbara Butler, told Newsday that he "has it all together - he's extremely intelligent, hardworking, well-rounded, and humble."

While Enin hasn't made a decision yet, he told the Los Angeles Times that he likes Yale since it's close to home, just across Long Island South.

Hats off to you, Enin.

More like this
34 Quotes That'll Inspire You On Juneteenth & Beyond
By Syeda Khaula Saad and Siena Gagliano
The Families Of Grenfell Tower Are Still Waiting For Justice, Five Years On
By Bustle UK
How To Fight For Reproductive Rights, Based On How Much Time You Have
By Courtney Young
Juneteenth Is Now A Federal Holiday — Here's What That Means
By Lani Seelinger and Syeda Khaula Saad
Get Even More From Bustle — Sign Up For The Newsletter