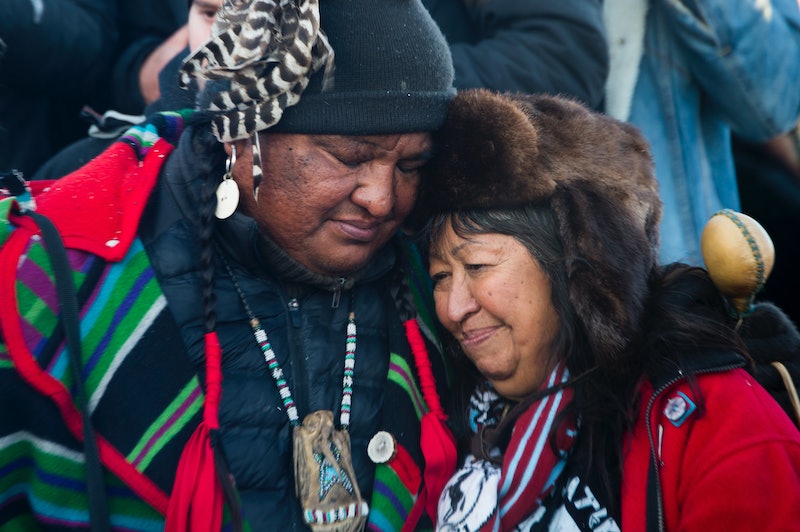 Water protectors at Standing Rock scored a major victory this week as the U.S. Army Corps of Engineers denied the Dakota Access Pipeline's drilling beneath a local reservoir. But besides calling attention to the injustices occurring in North Dakota, Standing Rock activists are bringing national attention to the issue of environmental racism in the United States.

Like the Flint water crisis, the DAPL is an example of how environmental issues, such as pollution and climate change, can often disproportionately impact communities of color. In the case of the DAPL, an earlier route proposal that would have brought the pipeline north of Bismarck, North Dakota, was allegedly rejected because of the danger it would pose to the overwhelmingly white city's water supply, Dave Archambault II, chairman of the Standing Rock Sioux tribe, claimed. The North Dakota Public Service Commission refuted this claim, however, saying that the Bismarck route was rejected because of its proximity to municipal water supply wells, homes, and for the fact that it would have been at least 10 miles longer than the route that is currently under debate.

Activists say the current proposed route threatens the water supply of the over 15,000 residents of Standing Rock Reservation, a claim that could be addressed in the upcoming Environmental Impact Statement.

Environmental racism, a term coined in the 1980s by former NAACP executive director Rev. Dr. Benjamin Chavis, names the phenomenon of communities of color bearing the brunt of exposure to polluted land, air, and natural resources. Awareness of environmental racism rose in the years after the term was coined, and the '80s and '90s saw environmental justice gains such as the Superfund Amendments and Reauthorization Act, the Safe Water Drinking Act, and the Environment and Natural Resources Division of the Department of Justice. Still, there is much work to do to address the environmental issues affecting people in towns and cities, especially people of color.

Below are just a few current examples of environmental racism that illustrate how the #NoDAPL movement is not an isolated incident, but rather part of a larger trend of environmental injustice.

A 2013 Environmental Health Perspectives study found that, due to discriminatory housing policies and racial segregation in cities, urban neighborhoods that are home to mostly racial and ethnic minorities are less likely to have tree canopies and grassy areas that keep them cool in the summer. As a result, these neighborhoods are most likely to have urban heat islands, or areas that are significantly warmer than those around them. Heat islands can cause illness or even death and will only become more dangerous as climate change progresses.

The area from Baton Rouge to New Orleans that, according to MSNBC, is home to over 150 industrial plants and refineries. The towns here — the vast majority of which are low income, communities of color — face immense exposure to pollutants and carcinogens released by these neighboring plants. As reported by MSNBC, the affected area has gotten the nickname "Cancer Alley" due to the high number of residents who have been diagnosed with cancer and other illnesses. Earlier this year, the Atlanta Black Star reported that yet another chemical plant is set to be built in the area.

In 2010, Mother Jones published a shocking investigative article about Kettleman City, a majority Latinx town in California in which a startlingly high number of children have been born with birth defects since 2008. Additionally, according to a report from San Francisco CBS affiliate KPIX, the town's water has been allegedly tainted with arsenic for a number of years.

Local activists pointed to important documents and public meetings being only in English and thus inaccessible to the many Spanish-speaking residents as a reason such environmental injustices were able to occur. These activists have gained a victory in recently settling with state agencies to require Spanish translation for such documents and meetings, as reported by The Fresno Bee, but their work continues as the alleged environmental threats to that area remain.

According to National Geographic, air pollution in the largely Latinx neighborhoods of East Harlem has made children in the area three times more likely to suffer asthma attacks requiring an ER visit than children in other Manhattan neighborhoods. As Lindsey Konkel reported for the magazine, children living in the wealthy Upper East Side are exposed to similar amounts of air pollution, but have better access to preventive care and aren't victim to the dangerous stressors of poverty. As such, they are "nine times less likely to be hospitalized for an asthma attack than children growing up just blocks away in East Harlem."

These are only a few of the numerous examples of environmental racism across the U.S. Stopping the DAPL from running through a protected reservation is an important step for environmental justice. Yet, we must remain vigilant of the environmental injustices taking place in North Dakota, Michigan, and beyond. For many Americans, the environmental issues happening at Standing Rock and in Flint might feel thousands of miles away. However, there are crimes against our land, air, and water taking place in many of our own backyards.