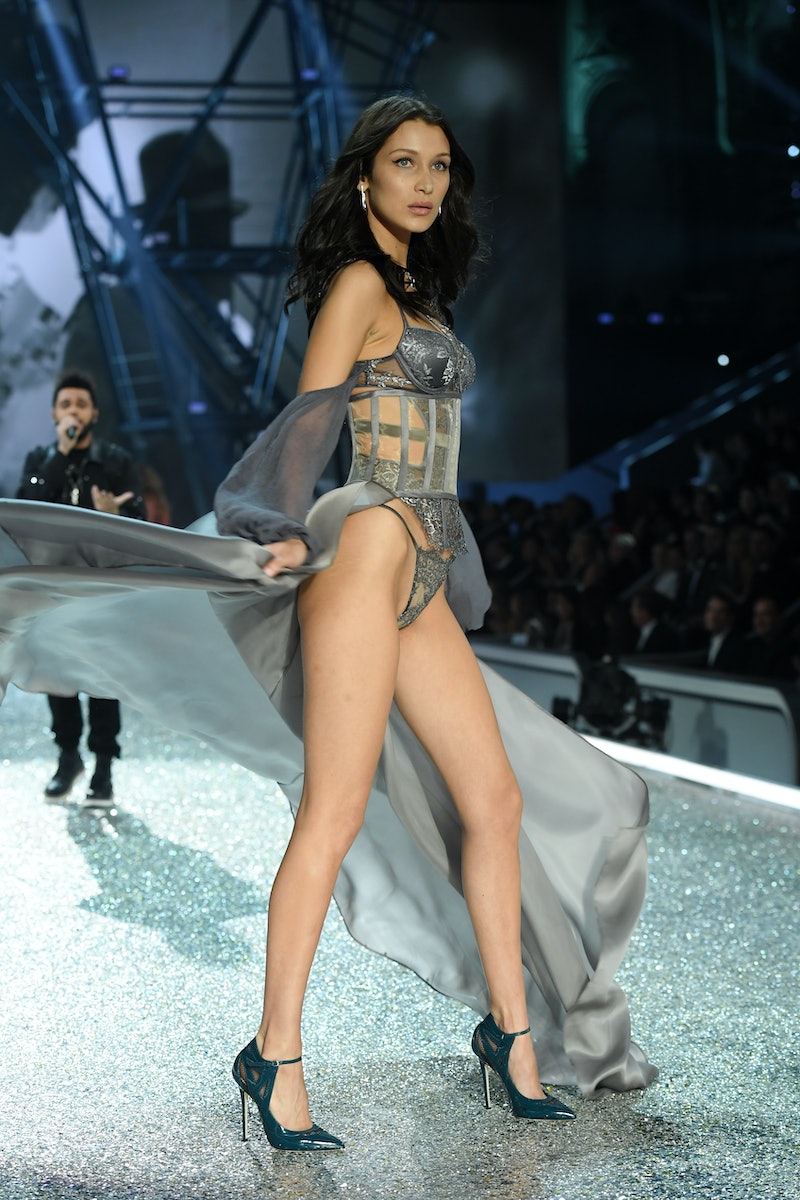 Stop what you're doing — Bella Hadid and The Weeknd just officially had the all-time best post-breakup run-in in the history of the world at the Victoria's Secret 2016 Fashion Show, and you need to see it. We all pray that we look our best when we bump into an ex who's wronged us (#guilty), and Hadid just got to do it looking f**king flawless on the Victoria's Secret runway. Is anyone else screaming? Because I'm screaming.

On Wednesday, Hadid walked in the Victoria's Secret Fashion Show for the first time, where her ex-boyfriend The Weeknd happened to be performing. She strutted straight past him down the runway in silver and gray lingerie, and shot a pretty major "go f*ck yourself" look over her shoulder as she walked by. This moment will forever be frozen in time as the most perfect showing of revenge body/hair/face/everything of all time, and is something the rest of us can aspire to for all future breakups (well, minus the whole "Victoria's Secret model" thing).

Hadid and The Weeknd broke up in early November after a year and a half together, which shattered all of our dreams for a lovey-dovey Adam Levine and Anne Vyalitsyna-esque moment (#RIP) on the VS runway. However, the video of this icy situation will probably get just as many YouTube hits as Adam serenading his ex-girlfriend did, so it's not all bad.

Since the show doesn't air until Monday, Dec. 5, the only proof we have of the run-in is a series of still photos from the show.

It wasn't all fierce looks though — she did flash a smile.

But that hasn't stopped the internet from (rightfully) freaking out.

I still can't get over it either.

Someone, get them a show!

I can only imagine how nervous Hadid was to walk in the VS show for the first time (though at least she got a better outfit than fireman Gigi did for at her first show), not to mention the added pressure of having to do it in front of her ex-boyfriend, but she handled it like an absolute pro. Bow down to Bella, y'all.

More like this
Phoebe Dynevor Serves ‘Bridgerton’ Underboob In Stunning Floral Gown
By El Hunt
Beyoncé Wore A Golden Sheer Gown At Her VIP Dubai Concert
By Sam Ramsden
J.Lo's Micro-French Manicure Has A Fun, Sparkly Twist
By Olivia Rose Rushing
The Biggest Fashion Moments Of Paris Couture Week 2023
By Dominique Norman
Get Even More From Bustle — Sign Up For The Newsletter
From hair trends to relationship advice, our daily newsletter has everything you need to sound like a person who’s on TikTok, even if you aren’t.