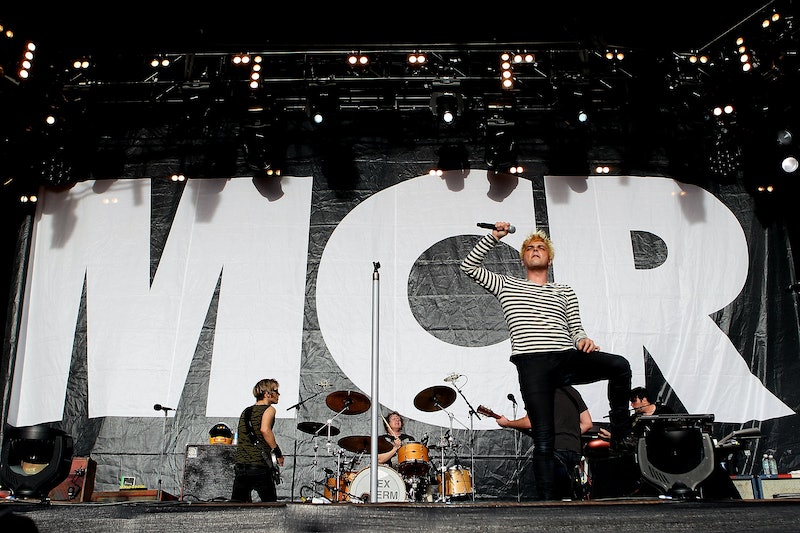 Here's something that will make you feel old: My Chemical Romance's sophomore album, Three Cheers for Sweet Revenge , was released 10 years ago. Let that sink in for a moment. OK, now that My Chemical Romance has forced you to come to terms with your own mortality, let's talk about emo music.

For the uninitiated, emo is "a style of rock music characterized by melodic musicianship and expressive, often confessional lyrics." (Thanks, Wikipedia!) Popular emo bands include Dashboard Confessional, Taking Back Sunday, and, yes, MCR. If you were a teenager in the early 2000s, you either listened to — or loathed — emo music. I fell into the former category, although you'd never have guessed it by looking at me.

And while adult me usually confesses my adolescent love of the genre with a sheepish giggle and a change of subject, today, I am hear to defend that love.

Because the truth is, emo music quite literally changed my life. That may sound a tad bit dramatic, but allow me to refer you to the many people who claim emo music saved their lives. This is some powerful stuff we're talking about here.

My story is pretty familiar — I was a teenager who never felt like she fit in. I was quiet and preferred books to people. For awhile, especially in middle school, I tried to make myself fit in. Enter My Chemical Romance.

During my sophomore year, the band was rising to widespread fame with the song "Welcome to the Black Parade." (Not their best work, I might add). It was also the pinnacle of my awkward phase.

I had gained some weight that I was trying to lose, I had a bad haircut (okay, so I had no haircut), and my wardrobe included a skirt covered in cherries, a floral prairie girl dress, and a shapeless Pink Floyd "Wish You Were Here" t-shirt from Hot Topic. I had friends, but my social groups were constantly shifting. I felt lost.

That was, until one weekend at my friend's house. In her bedroom plastered with band posters and ripped magazine photos, we watched the My Chemical Romance documentary (yes, there's a documentary) called Life on the Murder Scene.

As a teenager, the documentary was riveting. It told the story of a group of lost boys who came together to make some noise, and wound up changing the face of music.

MCR's discography was unlike anything I'd ever heard. Rough, but also cinematic, it had lyrics that seemed to speak right to me. Lyrics about pain, yes, but also lyrics about being yourself and learning to own it.

As it turns out, My Chemical Romance actually ended up expanding my taste in art and music. The weird, the quirky, the macabre, the sad — these things began to captivate me far more than Top 40 radio. Ultimately, I owe my current eclectic taste to MCR. By learning to love music that wasn't pretty all the time, I opened myself up to appreciate grittier artists like Conor Oberst, Bob Dylan, and The Films.

The effect MCR had on me when I was younger is still palpable all these years later. They were the band that got me through the tormented young relationships and lonely walks through my quiet neighborhood. They helped me make the transition from high school to college. They perfectly captured the dramas particular to my adolescence, however melodramatic they may seem in retrospect.

When I listen to one of MCR's records today (okay, queue up their mp3s on iTunes, who am I kidding), it's just like catching up with an old friend. And I'm always happy to see them.