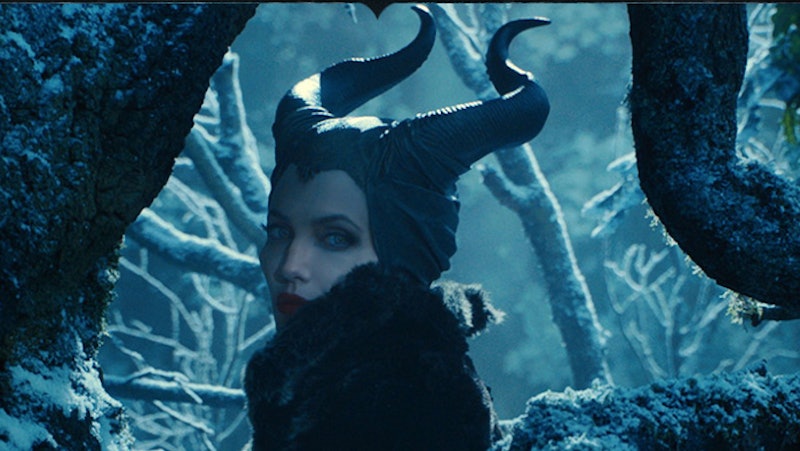 When Disney decided to make a film based around one of their scariest villains, they couldn't have chosen a better leading actress than Angelina Jolie. Maleficent is a highly anticipated movie not just because it's taking a fresh look at one of the many Disney villains that kept us awake at night when we were children, but because it's one of the upcoming spring movies with a female lead that will be raking in the ticket sales at the box office. Except, according to the New York Post, Maleficent might be too scary to rake in very many ticket sales at all.

Whether Maleficent does well at the box office remains to be seen, but even if it does poorly, it has to be an April Fools' Day joke to blame that on how scary it is. Have these analysts ever even seen your average Disney movie? Practically no one is allowed to have parents and sometimes, like in Frozen, we get the pleasure of seeing them die on-screen during a musical interlude.

But if anyone's really worried that Maleficent might be too scary to go and watch, here are a few films from Disney's animated canon that had moments much scarier than anything Maleficent could possibly throw at us.

The Hunchback of Notre Dame

If we're just talking terrifying Disney villains, Frollo has got to make the top five on that list. This is the man who tried to burn France to the ground just to get his hands on one gypsy woman who just wasn't that into him. Thankfully, we were all too young to understand that much, but one of the scariest Frollo moments comes in his pursuit of Esmerelda. After questioning a family on her whereabouts, Frollo locks them inside their own house and commands his Captain of the Guard set the house on fire. When Phoebus responds with the Disney equivalent of, "What the hell is wrong with you, you sick bastard?" Frollo responds by burning the house down himself. There were children in there. There were children watching.

If it's dark scenes and cinematography that they're afraid of, look no further than Tangled. The movie was a two-hour trigger warning for everyone who has ever been in an abusive relationship, but even those who were too young or too lucky to really feel the effects of Mother Gothel's special brand of terror didn't leave the theater completely unaffected. When Flynn Rider foiled her plan by slicing off Rapunzel's golden magic hair, Mother Gothel aged hundreds of years in the span of a second, decaying before our eyes and then falling out the window to her death. Luckily, she disintegrated into ash before she hit the ground. Especially lucky because Disney decided to follow her cloak and ashes on its journey all the way down. If only we all had seventy feet of hair to hide in.

As anyone who has ever watched The Lion King can tell you, just because a movie seems like a lighthearted film taking place in the animal kingdom it doesn't mean that Disney isn't setting you up for despair. In fact, despair is even more guaranteed. Clayton may seem pretty low on the list of terrifying villains depending on how you feel about guys going at gorillas with a gun instead of you, but his death scene goes right up there with Mother Gothel's. He and Tarzan got into a power struggle in some vines (which already sounds like it's not going anywhere good) and, as you might have guessed, it ended with Clayton getting tangled in one like a noose. There was even a quick lightning flash that illuminated the shadow of his lifeless body as it hung from the vine. It was all very family-friendly.

The Incredibles holds the distinction of being the Disney movie with one of the highest kill counts if you don't count all the members of the army who died in Mulan. In fact, there's a good chance it even exceeded that, since it also counts as one of the darkest movies that Disney has made so far. However, perhaps the most disturbing part of the film was when Mr. Incredible was hiding from one of Syndrome's droids and finds himself in a cave filled with the dead bodies of the superheroes who tried and failed to beat the robot before him. Mr. Incredible then hides underneath the body of a fallen super in order to evade the robot's notice. Repeat: He hid underneath the dead body of another super. And they showed this. On screen.

Yeah, what was that about Maleficent being too scary again?

More like this
The 'Hocus Pocus' Sequel Finally Has A Release Date & It Makes Total Sense
By Shannon Barbour and Radhika Menon
'Elvis,' 'Walk The Line' & 10 Other Movies Where The Actors Actually Sing
By Radhika Menon
“The Door Is Always Open” For Another 'Breaking Bad' Spin-Off, Says AMC Boss
By El Hunt
Neil Patrick Harris Will Play 'Doctor Who's “Greatest Enemy” Yet
By El Hunt
Get Even More From Bustle — Sign Up For The Newsletter